Egypt has been expressing its fears that the Renaissance Dam project would be completed before a planned study is carried out, as this could jeopardize Egypt’s share of the Nile waters. 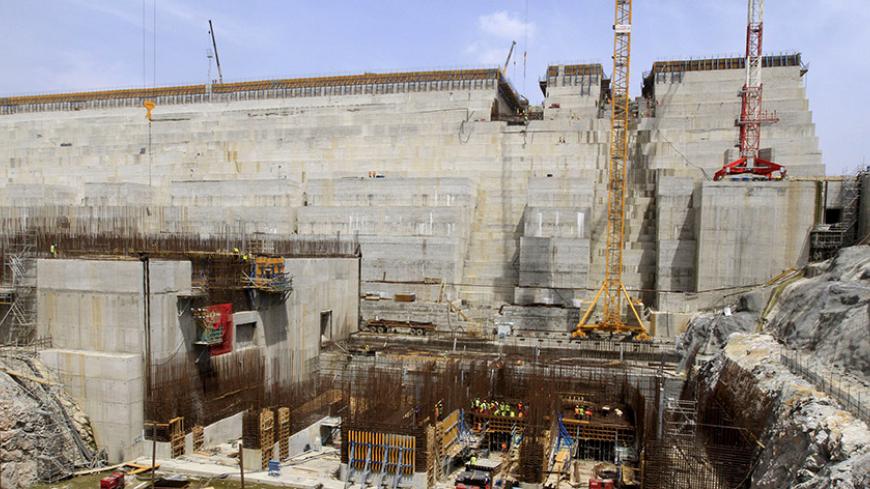 Construction workers are seen at a distance in a section of Ethiopia's Grand Renaissance Dam, as it undergoes construction, in Benishangul Gumuz Region, Guba Woreda, in Ethiopia, March 31, 2015. - REUTERS/Tiksa Negeri

Cairo — Controversy prevailed in the Egyptian public opinion, after Deltares, a Dutch advisory institute, announced on Sept. 15 its withdrawal from a study to assess the risks that the Grand Ethiopian Renaissance Dam, which is under construction on the Blue Nile, can cause to Egypt and Sudan.

The withdrawal from the project by Deltares has been met by a wave of objections in Egypt for fear that this could further obstruct the completion of the study, which was supposed to be completed last March — at the time, the research hadn't even started yet. Ethiopia, on the other hand, has completed 47% of the required work on the dam and is preparing to inaugurate and operate the first stage in October 2016. This initial operation threatens to reduce Egypt’s share of the Nile waters, currently standing about 55.5 billion cubic meters, by 14.5 billion cubic meters.

Deltares justified its withdrawal in a statement posted on its website Sept. 15, saying that the conditions as imposed by the Tripartite National Committee and BRL Group, a French consultancy firm that is also carrying out a study alongside Deltares before the latter withdrew, on how the study should be carried out did not provide sufficient guarantees that the results delivered would be unbiased and accurate.

The negotiations between Egypt, Sudan and Ethiopia, on the one hand, and Deltares and BRL, on the other, failed to resolve the differences over the tasks to be carried out by Deltares and BRL in order to conduct the planned study. BRL, which is required to conduct 70% of the study, made an offer where it monopolizes the study and turns Deltares into a subcontractor that performs the tasks delegated to it by BRL, which Deltares has rejected.

Egyptian Minister of Irrigation Hossam Maghazi told Al-Monitor that the Egyptian government confirms that it is confident Ethiopia will abide by the agreement of principles between Egypt, Ethiopia and Sudan on Ethiopia's Grand Renaissance Dam, which was signed by Ethiopian Prime Minister Hailemariam Desalegn, Egyptian President Abdel Fattah al-Sisi and Sudanese President Omar al-Bashir in Khartoum last March, to not cause any damage to Egypt in the operation of the Renaissance Dam.

Yet former Egyptian Minister of Irrigation Mohamed Nasr Eldin Allam told Al-Monitor that there is a loophole in the provisions of the agreement of principles, which is resulting in Ethiopia not abiding by the agreement with Egypt in terms of operating the dam and the date of the first filling of the Renaissance Dam reservoir. The agreement stipulates that Ethiopia wait 15 months from the start of the study before starting to fill the tank. Ethiopia is getting ready to fill the tank while the study has not commenced yet. Allam said that this will pose a threat to Egypt’s share of the water in case the dam was operated without this study.

Article 5 of the agreement, which is on the principle to cooperate on the first filling and operation of the dam, stipulates “to implement the recommendations of the International Panel of Experts [IPOE], respect the final outcomes of the final report, and agree on the guidelines and rules on the first filling of the dam, which the owner of the dam may adjust from time to time, and inform the downstream countries of any unforeseen or urgent circumstances requiring adjustments in the operation of the dam, in a timeline of 15 months from the inception of the two studies recommended by the IPOE.”

Allam accused the Egyptian negotiator of killing time to the advantage of Ethiopia and asked why the study is planned to take place while Ethiopia is already preparing for the opening of the first stage of the dam and has already completed a significant part of the construction.

In this regard, Maghazi said, “Who is paying attention to the importance of completing the study when the dam is under construction and the first stage is scheduled to operate next year? The study that was set to be conducted with Ethiopia has nothing to do with the building designs of the dam as a facility. Yet we are discussing and studying the dam’s large storage capacity, which Egypt rejects.”

Maghazi stressed that the study will determine the damage that could be inflicted on Egypt as a result of storage capacity, as well as the operating mechanism to avoid such damage.

For his part, Alaa Yassin, Egyptian government spokesman for the Renaissance Dam file, told Al-Monitor, “We are acting in several directions to resolve the differences between Deltares and BRL and resume the required studies on the Renaissance Dam. Yet there are no guarantees that there might be a solution, honestly.”

He added, “Time is being wasted. It is in the advantage of one of the sides to stall, while time is a pressure factor for the Egyptian side.” Yassin concluded that the agreement of principles requires that Ethiopia agree with Egypt on the rules to operate the first stage. He did not deny that the article stipulates that this takes place in a timeline of 15 months from the inception of the studies.

Cairo is currently engaged in the development of several alternatives to overcome the crisis of attrition, as more than a year has passed without the inception of the study. This has prompted Egypt to call on Addis Ababa and Khartoum to hold an urgent meeting, which may take place at the end of October, to resolve the differences between the companies in charge of the study and to convince Deltares to retract its decision to withdraw and to carry out the tasks to complete the study.