Egypt may have procrastinated itself into a corner as it passively awaits a solution to concerns about how the already-underway Grand Ethiopian Renaissance Dam will affect its water supply. 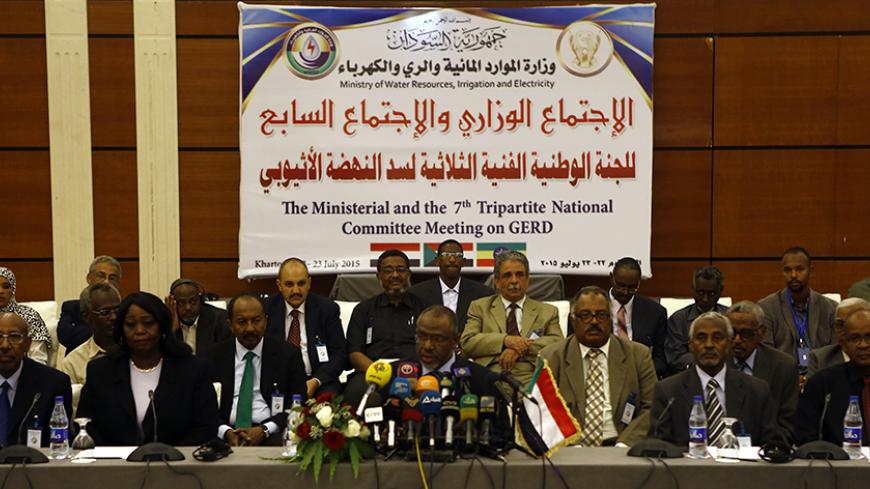 CAIRO — Egypt has been trying for a year and a half to resolve issues surrounding construction of the Grand Ethiopian Renaissance Dam, but there is no solution in sight.

Technical negotiations between Egypt and Ethiopia are marred by a deep disagreement that’s impeding any clear solution to reduce the dam’s negative impact on Egypt’s historical annual quota of Nile water, which amounts to about 55 billion cubic meters (14.5 billion gallons) per year.

The ninth round of talks by the Tripartite National Committee (TNC) took place Nov. 7-8 in Cairo. The TNC, which first met in Khartoum in August 2014, includes experts from Egypt, Sudan and Ethiopia. However, the only outcome of the most recent meeting was an agreement to try to schedule another meeting. No date had been set as of this writing.

Egypt has been waiting — and waiting — for an impact study on the hydraulic, social, environmental and economic impacts of the dam on Egypt and Sudan, in accordance with recommendations of a report by the International Panel of Experts (IPOE). The study has been stalled by disagreements between the firms hired to conduct it and between the firms and the TNC. Meanwhile, Ethiopia already has completed a significant part of the construction of the first stage of the dam.

An Egyptian official with the negotiating committee told Al-Monitor on Nov. 20, on condition of anonymity, “We sent multiple messages expressing our refusal to resume the technical talks in the absence of a decisive political decision to set a timeline for the completion of the required studies and of Ethiopia’s abidance by their results.”

The official continued, “We handed the Ethiopian side a report including the Egyptian objections on the method of conduct of the negotiations. The Ethiopians did not answer our objections and postponed their examination until the six-party meeting.

“We have other alternatives to the technical negotiations, which cannot continue under the current situation that does not guarantee their implementation.”

Hani Sewilam, a professor of water resources management at RWTH Aachen University in Germany, told Al-Monitor there is no need for new studies.

“There are [already] international research studies tracking the expected negative impacts of the dam on Egypt and Sudan,” he said.

Since the first phase of construction will be complete before new studies can be conducted, “it will be impossible by that time to negotiate amendments to the dam construction specifications or storage capacity,” Sewilam said.

He explained, “The most optimistic scenario to minimize the expected damage on Egypt as a result of the construction of the dam is the assumption that it will be filled in 50 years. But this assumption is not going to materialize, since Ethiopia will not wait 50 years to start optimal power generation from the dam.”

The most likely scenario is that the reservoir will be filled in seven years, “which will reduce Egypt’s water supply by 25% and will reduce Egypt's water quota by 11% during the filling years,” said Sewilam, warning of the high risk level. Ethiopia could even decide to fill the dam in just three years, he noted.

“There is no technical solution at this time unless Ethiopia agrees to stop construction immediately and cooperates on the reassessment of reservoir capacity — to reduce the storage capacity.”

He added, “The continued negotiation on technical issues relating to the specifications or impacts of the dam is just a matter of procrastination. Time is not on Egypt’s side, but serves Ethiopia.”

Egypt had indirectly signaled that it accepted the dam despite concerns about potential dangers to the Egyptian water supply. In an August 2014 press conference in Khartoum, Egyptian Minister of Irrigation Hossam Maghazi confirmed there was no dispute over the first phase of construction.

That places Egypt in an awkward position. It now must seek to gain the support of the international community once again — as it had during a diplomatic campaign in 2013 and early in 2014 to restrict construction funding in the hopes that an alternative could be found that would reduce risks.

Rawia Tawfik, a professor of political science at Cairo University, spoke with Al-Monitor about Egypt’s political position on the ongoing dam negotiations.

“The pressure cards that [Egypt] might use in these negotiations — such as strengthening its ties with neighboring African countries [to counter Ethiopian clout] — might not have a direct impact of the settlement of the crisis with [Ethiopia] at the moment," Tawfik said.

Tawfik continued, “It seems that Cairo has no other option now; the only solution is to continue the negotiations on the technical and political levels.”

Cairo’s options are very limited as it seeks to preserve its annual quota of Nile water, which already is not nearly enough to cover its internal water needs. On the other hand, Ethiopia and its Nile Basin neighbors have high aspirations and hope and seek to exploit the river's waters for development purposes.