A year after his death last December, justice may yet come for Egyptian reporter Al-Hosseiny Abou Deif as deposed President Mohammed Morsi faces trial for the 2012 killing of protesters. 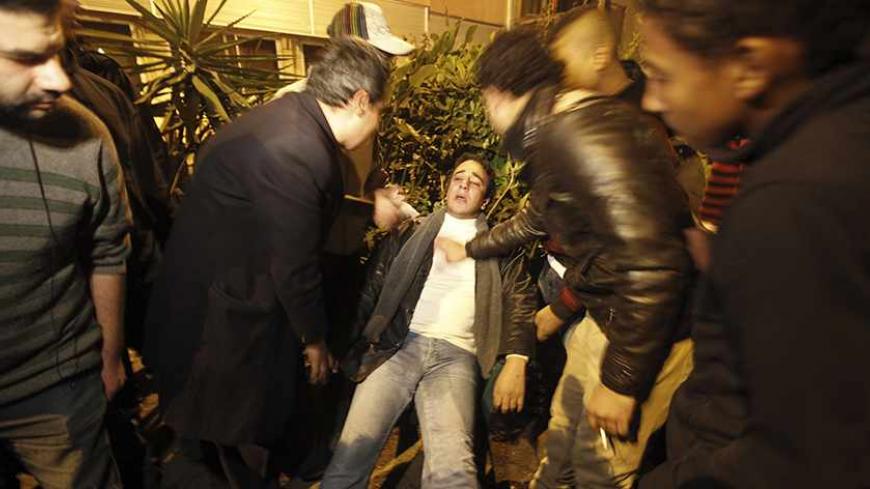 An injured journalist is surrounded by other journalists after the Al Wafd headquarters was attacked by Islamists in Cairo, Dec. 15, 2012. - REUTERS/Amr Abdallah Dalsh
Shadi Rahimi
@shadirahimi
December 11, 2013

CAIRO — On Dec. 12, 2012, Egyptian reporter Al-Hosseiny Abou Deif was killed while reporting on clashes outside the presidential palace between protesters demonstrating against then-President Mohammed Morsi and his supporters.

It was an unprecedented moment. The country’s first Islamist president had issued a constitutional decree giving him sweeping new powers and stripping the judiciary of the power to challenge his decisions. He had also called for a referendum on a constitution drafted mostly by Islamists that opponents said failed to protect the rights of women and the media, among its other faults.

Morsi’s supporters attacked a peaceful demonstration at the palace protesting his rule early that December, sparking a bloody and polarizing battle that would leave 10 dead and 748 injured. Deif died in a local hospital after being shot in the head Dec. 12 — one of nine journalists killed while working in Egypt since 2011.

As 2013 nears its end, Egypt has been ranked second on the Committee to Protect Journalists’ list of deadliest countries for journalists in 2013, with Syria ranked first. The CPJ recently made public a letter it sent to Egypt’s attorney-general, Hisham Barakat, urging investigations into the killings of journalists in Egypt.

“The only way to break the cycle of impunity is to bring to justice the killers of journalists, something Egypt has failed to do,” the letter said.

The clashes outside the presidential palace a year ago were the first time since the 2011 ouster of President Hosni Mubarak that Egyptians attacked each other while riot police watched. Shots were fired from both sides, as witnessed by this Al-Monitor reporter. Crowds of Morsi supporters were seen beating the protesters they captured. Human Rights Watch would later urge Egypt’s public prosecutor to investigate the abuse of 49 protesters “unlawfully held” by Muslim Brotherhood members.

Deif, a reporter for the private weekly El-Fagr, was at the presidential palace and was initially shot by a rubber bullet while covering the events of Dec. 12, according to the CPJ, which spoke to his family and friends and published an account of his death.

The reporter filmed video that day showing Morsi supporters assaulting protesters, his colleague Hossam Sioufi told the CPJ. Four months earlier, Deif had written an article about Morsi’s mass presidential pardon of 572 people, including Morsi’s brother-in-law. Soon after it was published, Deif said he had received threats from Brotherhood supporters, according to CPJ interviews.

At the palace, a Brotherhood supporter focused a laser penlight on Deif to identify him for attack, activist Hassan Shahin told Egypt’s prosecutor, the CPJ said.

At the time, the executive board of the Journalists' Syndicate in Egypt blamed the leadership of the Brotherhood for Deif’s killing, and also held Morsi responsible for his failure to ensure public security.

“The subsequent investigation and the government's response were marked by irregularities,” the CPJ said in its account of Deif’s killing.

Of the nine journalists killed in Egypt since 2011, six died in 2013, according to the CPJ. Whether under the rule of Morsi or the current military-backed interim government, “No one has been held responsible in any of the cases.”

The CPJ published in its letter to the attorney-general a list of journalists killed in Egypt since the spring uprising. In 2011, it said, Al-Ahram reporter Ahmad Mohamed Mahmoud was shot by a sniper on Jan. 28 and Al-Tareeq cameraman Wael Mikhael was shot Oct. 9 while filming a violent military dispersal of a Coptic Christian demonstration, where at least 25 were killed.

In 2013, Shaab Masr reporter Salah al-Din Hassan was killed June 29 by a homemade bomb while covering a protest against Morsi, and Freedom and Justice (the Brotherhood's newspaper) reporter Ahmed Assem el-Senousy was killed by a sniper July 8 while covering clashes at the headquarters of the Republican Guard.

On Aug. 19, Tamer Abdel Raouf, director of the Beheira bureau of the state-run Al-Ahram, was killed when soldiers opened fire on his vehicle at a military checkpoint in the Nile Delta city of Damanhur.

In September, the CPJ launched a campaign calling for investigations into the killings of journalists in Egypt. More than 1,000 people signed on, along with prominent Egyptian journalists and activists including Alaa Abdel Fattah, who is now facing criminal charges along with 24 activists for defying a new protest law.

Last month, the Third Committee of the United Nations General Assembly passed a resolution on the safety of journalists, naming it a growing global concern — a move hailed by the press-freedom watchdog Reporters Without Borders.

“This latest resolution is undoubtedly a new step in the right direction,” said RWB Secretary-General Christophe Deloire in a statement. “However, the problem that remains to be addressed is not a legal void but the lack of any verification of respect by member states for their obligations, in particular their obligation to protect journalists, investigate all acts of violence and bring perpetrators to justice."

Morsi is now facing trial for the violence and killing of protesters in December 2012 outside the presidential palace, which today remains one of many sites of ongoing clashes between security forces and Morsi supporters since his July ouster.

Much as in December 2012, Egypt is again awaiting another nationwide referendum on a new draft of its constitution in January, along with parliamentary and presidential elections which are expected to follow.

Deif’s case has yet to be solved. But after Morsi's ouster, the prosecutor general's office asked a Cairo judge to examine his case independently, a step that has encouraged his family and lawyers, according to the CPJ.

The outcome of the investigation has yet to be announced.