President Mohammed Morsi publicly expressed grief over those killed and wounded, while defending his actions against armed demonstrators. The Muslim Brotherhood claimed its members were the victims, not perpetrators, of the violence in Egypt, Mohannad Sabry reports from Cairo. 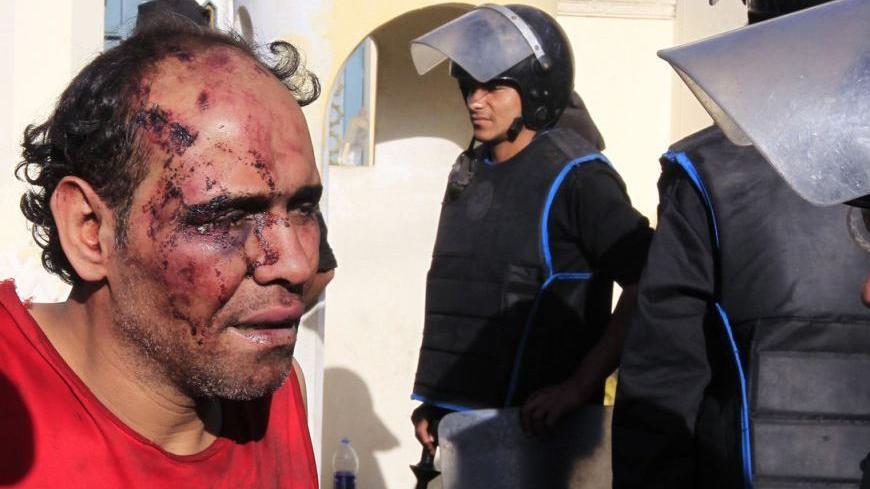 A protester who was injured during overnight clashes between supporters and opponents of Egyptian President Mohammed Morsi is detained by the Republican Guard in front of the presidential palace in Cairo, Dec. 6, 2012. - REUTERS/Mohamed Abd El Ghany

CAIRO — Egyptian President Mohammed Morsi expressed his grief over the deaths and hundreds of injuries resulting from violent clashes that continued into Wednesday, while warning against further challenges to his decrees and confirming that the constitutional referendum will be held as scheduled for Dec. 15.

“Such painful events happened because of political differences that should be resolved through dialogue,” said Morsi, adding: “I will never allow anyone to deliberately kill, sabotage, terrorize peaceful citizens, and attempt a coup on legitimacy.”
Morsi alluded to support from "political powers" for some to the protesters. “Some of those arrested unfortunately claimed having relation with political powers. Some were hired and investigations revealed who financed them, armed them and supported them,” he said.
“The constitutional declaration caused some political opposition and that is acceptable, as for those who used it to spread guns and money, it’s time to prosecute them by law,” Morsi added and called on political powers to engage in dialogue at the presidential palace starting Saturday [Dec. 8].
As for the constitutional referendum scheduled for Dec. 15, Morsi said: "The minority should submit to the will of the majority and everyone should cooperate for the interest of the nation, isn’t this democracy?”
Earlier in the day, Egypt’s Republican Guards declared a protest ban, surrounded the presidential palace with tanks, sealed off all streets leading to the palace with barbed wire and started evacuating the perimeter at 3 p.m. Protesters from both sides retreated to side roads and streets far from Morsi’s executive mansion.
“The Republican Guards were deployed to separate between supporter and opposition and to stop any further injuries,” Gen. Harb Mohamed Zaki, Republican Guards chief, reported in an official statement. “The armed forces, headed by the Republican Guards, will never be a tool of oppressing protesters and there will be no use of force against any Egyptian citizen.”
Meanwhile, the Muslim Brotherhood and its political arm, the Freedom and Justice Party, led an organized media campaign through which several official spokesmen appeared on television to recite theories justifying their violent engagement with opposition protesters and claiming to be the only victim of clashes that erupted on their arrival to the presidential palace perimeter Wednesday evening, but their statements were inconsistent.
Morad Ali, an official spokesman of the Freedom and Justice Party, told Al-Jazeera Live Egypt Thursday that “Wednesday’s clashes left 1,500 injured protesters and six deaths, all of which were members of the party and the Muslim Brotherhood movement who demonstrated in support of President Morsi.”
In another talk with the independent Al-Youm Al-Sabe’a newspaper, Ali said: “We obtained unbelievable facts; there are martyrs that died of live ammunition and bird-shot bullets.”
The newspaper reported that Ali failed to elaborate his statement “unbelievable facts,” because he was “too angry at the moment.”
Another official statement by the Muslim Brotherhood said: “Our members were met by masses of thugs armed with fire arms, Molotov cocktails, tear gas, and rocks in addition to snipers, which left five martyrs.”
The statement added that its members were “assassinated” while they fought a conspiracy to “storm the presidential palace, the state’s icon and the office of its elected president.”
Both statements contradicted an official count by the Ministry of Health that put “the total number of injuries during Wednesday’s clashes at 762.” The statement stressed that only five protesters died during the clashes.
Yasser Ali, official spokesman of Egypt’s Popular Current, a coalition of leftist parties that joined protests Tuesday and Wednesday, told Al-Monitor that “revolutionary movements and opposition parties continue to gather information on the total number of deaths from the opposition side, so far there are 7 deaths including one unidentified body.”
“None of the names published by the Muslim Brotherhood or Ministry of Health match those of the bodies we identified,” said Ali.
The Muslim Brotherhood’s official website reported “that Republican Guards started transferring thugs that were detained on Wednesday to the police.”
“Some of the detainees admitted receiving money from former presidential candidates Hamdin Sabahi and Amr Moussa, former head of the International Atomic Energy Agency Mohamed El-Baradei and Al-Wafd Party chairman Sayyed El-Badawy.”
Dozens of videos published by several local news websites showed bearded supporters of Morsi brutalizing members of the opposition they detained and tied at the gates of the presidential palace.
One video published by the local Al-Watan newspaper’s website showed several members beating a man and threatening him “to either admit he was paid by Mubarak’s National Democratic Party or be killed.”
For hours on Wednesday, security forces and Republican Guards stood watching behind the walls of the palace. Military analyst and former Air Force Gen. Mohamed Okasha spoke to Al-Monitor over the security’s failure to take control and stop the bloodshed.
“Morsi, the Ministry of Interior, and the Republican Guards paved the way for the Muslim Brotherhood to show their muscle and attack the opposition,” said Okasha. “Morsi did not order his republican guards to interfere; they are the only military battalion that operates by direct orders of the president.”
“Both police forces and military are capable of controlling massive protests when they decide to, as they did on Tuesday when hundreds of thousands protested at the palace and not a single injury was reported.”
Okasha accused the Muslim Brotherhood of triggering the violence by “deliberately arming their masses and marching to a site already occupied by opposition strikers.”
“As for defending the presidential palace, no one has any right to overstep the fully operating authorities and claim securing state facilities,” said Okasha.