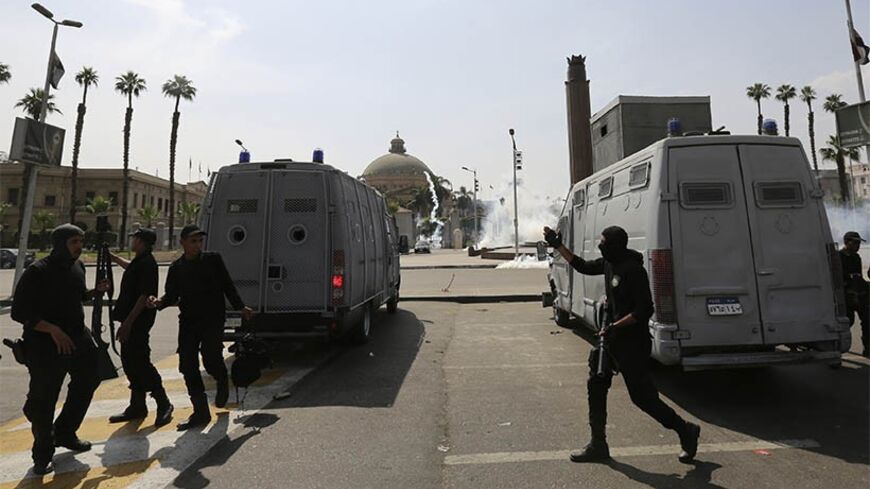 CAIRO — When Amru Salahuddien stepped onto the Cairo University campus on April 14, student supporters of ousted President Mohammed Morsi had begun marching toward the main gate. Riot police were stationed outside, and troops and armored vehicles flanked the other gates.

Police fired tear gas at the main gate, said Salahuddien, a photojournalist for the Chinese news agency Xinhua. Then he heard the firing of automatic rifles. Most of the students ran, he said, scattering across the campus. But some remained near the main gate, ducking behind palm trees and thick concrete columns, throwing back hot tear gas canisters. A female student was shot in the leg and fell, he told Al-Monitor.

“An armored vehicle approached the main gate and the soldiers began shooting from the ports in the vehicle's body. I took cover behind a palm tree and kept photographing,” he said. “Three students were shot, most probably with shotgun fire. Later on, police noticed me along with three colleagues. For a whole minute, police kept firing at us. I could see the wood chips flying because of the bullets that hit it.”

Khaled Hussein, a photographer for the privately owned newspaper Youm7, was shot when he tried to move from behind a car, Salahuddien said. His newspaper reported he took a gunshot wound to his chest. Amr Abdel-Fattah, who works for the private television station Sada El-Balad, was wounded by birdshot, according to Al-Ahram, which also reported that one student was shot to death.

The Ministry of Interior denied its security forces had used live ammunition, and Interior Minister Mohamed Ibrahim told the state-run MENA news agency that the Muslim Brotherhood had been targeting journalists to create a chasm between the media and the government.

“Students carried the wounded to the faculty of science, trying desperately to help them,” he said. “Two ambulances were allowed inside the campus to evacuate the wounded journalists, but not the students.”

The Students Against the Coup movement has been regularly protesting last July’s ouster of Morsi by the military on and around university campuses, where protests often erupt into violent clashes between the students, their opponents and security forces. That day at Cairo University, Salahuddien tweeted that police were “intentionally” targeting journalists. It is not the first such claim. Journalists have alleged their targeting by security forces since the 2011 uprising. Of the 11 journalist deaths in Egypt since 1992, 10 have occurred over the last 2½ years, according to the Committee to Protect Journalists (CPJ).

Of the 10 deaths, three have been attributed to security forces, and two were blamed by family members on the Muslim Brotherhood, according to the CPJ. The others remain unknown, or have conflicting reports. Egypt was ranked the third-deadliest country for journalists by the CPJ last year, after Syria and Iraq.

Last week, Egyptian journalists rallied outside the Syndicate of Journalists building in downtown Cairo to protest the risks they face while doing their jobs. Below the gold signage bearing the syndicate’s name was a fresh mural of the face of Mayada Ashraf, a 22-year-old Egyptian journalist shot dead while covering clashes in late March. A few dozen journalists chanted, "Military rule stands between us and our freedom!,” “The police are thugs!" and "Killing journalists is shameful and traitorous!"

A smaller number chanted against the syndicate, which they blamed for their lack of protection. Its head, Diaa Rashwan, blasted media organizations for using “young journalists as slaves” by refusing to hire them full time and yet sending them out untrained and unprotected to cover clashes.

“The syndicate is doing the best it can,” he insisted, adding that he was urging all non-staff journalists to unionize and work with the syndicate to pressure their newspapers for safety equipment and regular salaries.

“We will begin to sanction all newspapers that send untrained journalists into the field,” he said.

After the Cairo University clashes, Rashwan had called for a strike by field reporters and requested bulletproof vests from the Defense Ministry, which agreed to provide 100 of them. But Salahuddien criticized the syndicate for being “weak and inefficient,” echoing criticism that a strike would serve “what the state wants and works for: the absence of field journalists who record and cover what the state wants to hide.”

Salahuddien said he believes government-issued vests “can be considered an unintentional, implicit confession from the Ministry of Interior of their use of live ammunition,” particularly since the photojournalists he knows who have been injured or killed were documenting from the protesters' side of the conflicts.

Conflicting allegations emerged after Ashraf’s killing, with prosecutors issuing a warrant against a Brotherhood supporter, but witnesses including a journalist alleged she was shot by a police sniper. Hussein and Abdel-Fattah remain in a hospital intensive care unit and could not be reached for comment by press time.

“Realistically, nothing will change. There is not a single law to protect journalists. We get arrested, tortured in some cases, shot and killed, and none of the aggressors were even questioned,” Salahuddien said. “I can't hope for anything but people's awareness of the truth that we risk our lives to reveal.”

Meanwhile, Hisham Younis, the editor of Al-Ahram Gate and a member of the Press Syndicate Council, told Al-Monitor that he has stopped assigning his reporters to cover clashes. He said he will wait until bulletproof vests and other protective supplies arrive to the office before reconsidering that decision.

“I have no desire to lose one of my journalists,” he said.