The killing of a student demonstrator is stoking further confrontations between police and protesters. 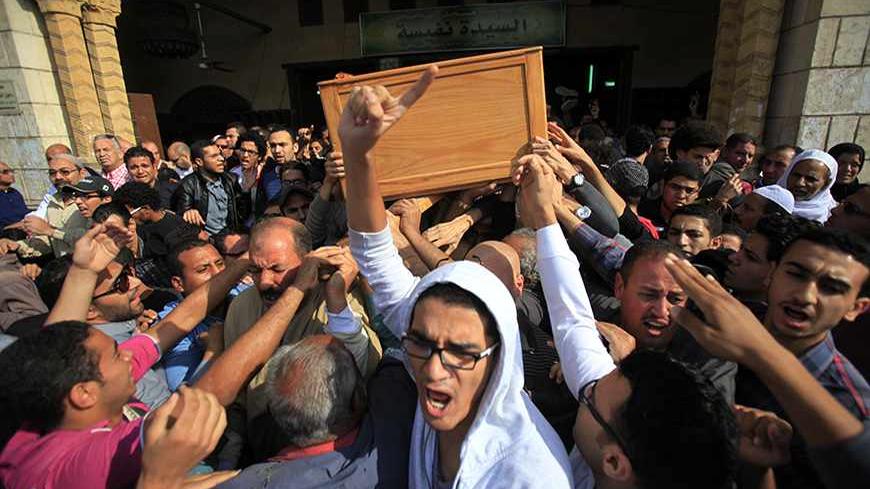 CAIRO — An eerie calm set over Tahrir Square a day after a protest was dispersed with tear gas fired by police, sending students dashing to escape at least 10 noxious white streams that landed around the iconic roundabout.

The Cairo University students had gathered in Tahrir at midday Dec. 1 to protest recent crackdowns by security forces and the killing of engineering student Mohamed Reda,19, on campus last week, during protests against heavy prison sentences handed down to female supporters of ousted President Mohammed Morsi.

Early the next day, Egyptian media would report prosecutor allegations that male and female protesters had fired birdshot guns during the protest and were to blame for Reda’s death and student injuries. The claim has outraged students.

The student union from the faculty of engineering, where Reda was a student, slammed the prosecution's report in a statement as "fabrication.” On Dec. 2, Reda’s schoolmates said on campus they are planning a sit-in later this week.

Two armored military vehicles were parked on streets alongside the campus and a media truck sat idly by. A dark van filled with riot police drove past the campus.

“It was them,” said engineering student Ahmed, 21, after cursing under his breath.

Reda had not been protesting the day he was killed, his schoolmates told Al-Monitor. He had come to the school on Nov. 28 with his father to finish some paperwork before clashes broke out in the street, said Ahmed, who is in his last year at the same faculty as Reda. Ahmed said he was on campus that day and recalled a different story than that in the prosecutor's report.

Pro-Morsi students had blocked roads outside of the campus, Ahmed said, and had begun clashing with police, who were responding with water cannons. The students ran inside the campus and the police followed, he said. Police then began shooting tear gas canisters into the campus, which infuriated the students, he said.

“The students chanted against the police and cursed at them,” Ahmed said. “One or two police officers came to the front of the gates and pointed with their middle fingers at the students. Then, the police pointed their shotguns inside the gates and started shooting.”

Ahmed’s friend was among the students injured by birdshot pellets, he said. A post-mortem examination reportedly showed Reda had died from three pellets fired from a shotgun. The university issued a statement blaming security forces for attacking students even after they entered the university campus.

Prime Minister Hazem el-Biblawi had announced in October that police would be permitted to guard universities from outside campus grounds, and could enter only when asked by university heads or after authorization by the prosecution.

Students demonstrated inside the university for the fourth consecutive day on Dec. 1, hanging banners and denouncing Reda’s killing and the use of violence by security forces against students. The protest held in Tahrir the day before had been dispersed under Egypt’s new protest law in response to the presence of Muslim Brotherhood supporting students, Ministry of Interior officials said in a statement.

The protest organizer had received permission from the government to gather in Tahrir, the statement said. But upon receiving word that Brotherhood supporters had joined the protest, security forces “took the necessary legal and security procedures to disperse the protest” under the new protest law, the ministry said.

The protest law states that if people refuse to leave after verbal calls to disperse, security forces have the right to use water cannons, batons and tear gas to disperse them. If those methods fail, “escalatory measures may be taken,” including the firing of warning shots followed by rubber bullets and finally metal pellets.

Traffic flowed easily through Tahrir Monday afternoon, where four armored military vehicles were parked nearby and a lone policeman spoke on a walkie-talkie. The nearby Talaat Harb Square, where a protest that had been planned by activists was canceled, was also quiet.

But the lull is likely short-lived. Students, the Brotherhood and activists all have all vowed to continue demonstrating this week against detainment and the government-backed violence that each camp has experienced over the past week.

At least 25 activists remain in jail after a protest on Nov. 26 against the inclusion of an article in a new draft of the constitution allowing military trials for civilians, said activist and spokesman Omar Robert Hamilton.

The detention of prominent activist Alaa Abd El Fattah has been extended for at least 15 days, while April 6 Movement leader Ahmed Maher is facing four days of investigation, Hamilton said. Arrest warrants have now been issued for four other prominent activists including singer Ramy Essam, he said.

Meanwhile, the lawyer representing the pro-Morsi women who were given lengthy sentences has been detained and accused of inciting violence.

The Ministry of Interior “is going beyond what even some in military backed cabinet approve of in terms of a crackdown. Asserting its dominant role in the state,” tweeted reporter Sharif Kouddous in response to the recent news.

Also on Dec. 1, a committee tasked with amending Egypt’s constitution approved their draft version, which retains the military’s political and judicial powers.

Opposition groups are expected to call for a “No” vote or even a boycott of the upcoming referendum.