Alaa Abd El Fattah is the latest activist to be arrested in a week of crackdowns that have energized protesters on polar ends of the political spectrum. 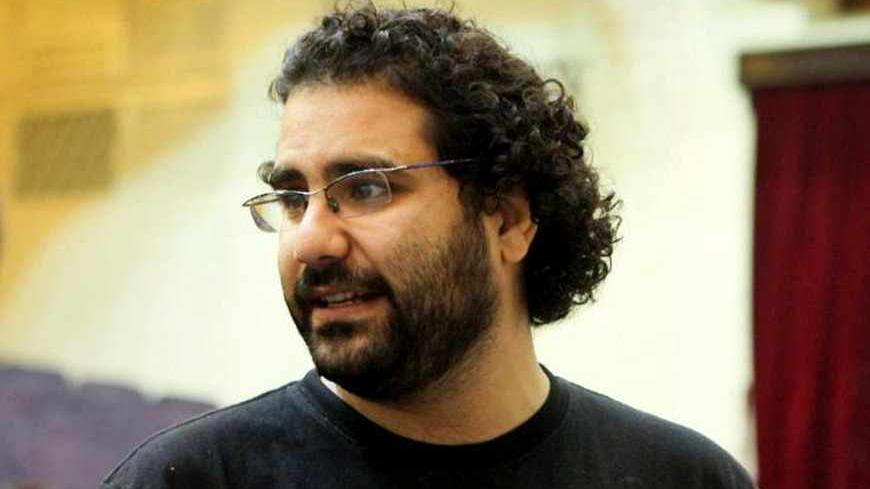 CAIRO — The latest arrest in a week of crackdowns came suddenly in the evening of Nov. 28 when police officers reportedly broke through the door of prominent activist Alaa Abd El Fattah’s home, beat him and slapped his wife, stoking the fury of activists already angered that day over the first protester death under a prohibitive new protest law.

The restrictive law has been challenged since being issued Sunday, Nov. 24, by protest camps on polar ends of the political spectrum — namely secular-leaning activists and the Muslim Brotherhood, whose outrage at the military-backed regime converges on social media while remaining parallel in the streets.

On Friday, Nov. 29, Fattah was reportedly ordered by the public prosecutor to serve four days in jail pending an investigation. According to his lawyer, his charges include "being part of a mob, protesting without notification to authorities, obstructing a road, protesting while carrying weapons, assaulting public officers, thuggery and robbery," said Omar Robert Hamilton, founder of the activist video collective Mosireen and one of the spokespeople for his case.

Fattah’s surprise arrest occurred around 10 p.m. on Nov. 28 as his son Khalid, 2, slept in the next room, Hamilton said. The police “had no search warrant, and when his wife demanded to see it, they were both beaten,” he said, adding, “They took their computers and telephones.” Fattah’s younger sister and wife tweeted about the arrest later that night.

Hi wife, Manal, tweeted a photograph of spots of blood with the caption, “Bloodstains in our bedroom where police have beaten @alaa.”

An arrest warrant had been issued for Fattah and April 6 Youth Movement leader Ahmed Maher for incitement and organizing a protest on Nov. 26 against an article in a new draft of the constitution that permits military trials for civilians, held outside the Shura Council, the upper house of parliament.

Police had violently dispersed that protest and another small demonstration downtown, held in memory of 16-year-old activist Gaber “Gika” Salah, who was killed in clashes with security forces in November 2012.

Police used water cannons, tear gas and beatings during the arrest, saying that the gatherings were illegal under a new law prohibiting spontaneous protest issued Nov. 24 by interim President Adly Mansour and dictating heavy fines and prison sentences. At least 51 people were arrested on Nov. 26, including prominent activists who tweeted about beatings and sexual assault.

“Even under the new protest law, the violence with which the protests were dispersed was illegal,” Hamilton said.

The arrested women — who included Fattah’s sister Mona Seif, founder of the No to Military Trials for Civilians campaign — were released on a desert road in the outskirts of Cairo hours after their arrest, tweeted one of the activists, Salma Said. Meanwhile, the 24 male protesters remained in jail Friday and are on hunger strike “after being further tortured,” Hamilton said.

A warrant for Fattah’s arrest was issued, and he was summoned to appear before the prosecutor-general on Nov. 30 for questioning, Fattah wrote in a Facebook statement later translated into English. He tweeted on Nov. 27: “Déjà vu, I'm about to hand myself in to the authorities again on Saturday. My ever imminent arrest is now a running joke in Egypt.”

At 32 years old, this is the fourth regime that Fattah has been arrested under. He was previously jailed under the regime of toppled President Hosni Mubarak for 45 days and again for two months in 2011 by the then-ruling Supreme Council of the Armed Forces. He also faced trumped-up charges for protesting under the government of ousted President Mohammed Morsi in 2013 along with popular satirist Bassem Youssef.

Fattah appeared to predict an arrest in his post, mentioning that he had remained at a police station for eight hours in solidarity with those detained on Nov. 26, but was not arrested. Fattah wrote: “This probably means that they intend to put on a show where I play the criminal-in-hiding.”

One of the groups that organized the Nov. 26 protests claimed responsibility, saying that Fattah and Maher should not be held responsible. Fattah’s arrest appears to be a very clear statement from the Ministry of Interior and the police that they are cracking down and “have been given free hand by the army to behave as they want,” Hamilton said.

Such “strong messaging” is being echoed by the heavy prison sentences for 21 female protesters — including seven girls under the age of 18 — on Nov. 27 for demonstrating as members of the Brotherhood, say Hamilton and other activists, and the Nov. 28 killing of a student at Cairo University during protests against the lengthy sentences. Fattah’s last posts on Facebook on Nov. 28 were about the clashes and the student's death.

Thousands of activists marched against the new protest law on Nov. 27, a day after the first violent dispersal this week, after the Ministry of Interior announced it would allow a planned protest in Talaat Harb Square to go on for five hours. Hamilton and other organizers denied having asked permission, referring to their protest as “illegal” in tweets and social media posts. In an act of defiance, they marched instead through downtown to the Shura Council, the site of the previous day’s dispersal. The event ended without incident.

“This is going to keep happening ­­— this is a classic rhythm that we've seen over the past three years. They overstep their mark, usually violently, and it re-energizes the protest movement,” Hamilton said.

Government officials and a number of political figures have defended the protest law this week, saying it is necessary for security and stability. The law is considered in part an effort by authorities to dissuade ongoing protests by Morsi supporters since his July 3 ouster. Deputy Prime Minister Hossam Eissa said in a Nov. 28 statement that the government does not intend to cancel or amend the new protest law.

Hamilton says spontaneous protests will undoubtedly continue in defiance of the law banning them and the compounding ills of the interim regime, including military trials for civilians, the detention of activists, the killing of the protester and harsh sentencing for the Brotherhood women.

Brotherhood supporters clashed Friday with security forces in Cairo and cities in the Delta region in their first demonstrations after Friday prayers since the new protest law was issued. Injuries and arrests were reported. A Brotherhood-supporting coalition has called for further protests Saturday to demand the release of the jailed women and girls.

There is no love lost between activists and the Brotherhood, which has for decades betrayed revolutionary movements, but their separate protests against the ruling regime are once again parallel, Hamilton said.

“We're seeing a resurgence of confidence in street power,” he said. “Whether we can take it beyond that has always been a traditional weakness of the revolution.”