A wave of support for the interim government and Defense Minister Field Marshal Abdel Fattah al-Sisi means that many detained activists, such as Alaa Abd El Fattah, often languish in prison. 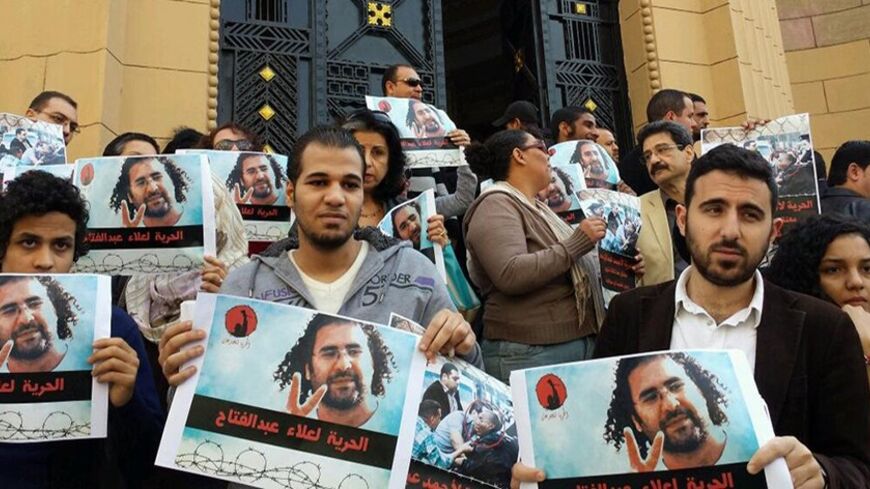 CAIRO — It has been a little more than 100 days since prominent activist Alaa Abd El Fattah was arrested on charges related to organizing an unauthorized protest. His detention has been repeatedly renewed and he is being held in prison without a trial date.

So is Ahmed Abdel-Rahman, a security guard whose supporters say was arrested after stopping to help women activists he saw being hit by police officers during a dispersal of the same protest. Much like thousands of other ordinary Egyptians and Muslim Brotherhood supporters swept up in widespread arrests since the military overthrew former President Mohammed Morsi in July, his case has not received much attention.

On March 9, a few dozen supporters of Fattah and Abdel-Rahman gathered in front of the Supreme Court building in downtown Cairo to demand their release. Fattah’s family also filed an official complaint with the Supreme Council of the Judiciary against the public prosecutor, which outlined violations they say took place during his arrest.

Their silent stand was met with anger by a crowd who chanted in support of the interim government and its popular defense minister, Field Marshal Abdel Fattah al-Sisi, shouting curses and insults, even calling for Alaa Fattah’s death for being a “traitor.” A clear divide between camps on Cairo streets is now commonplace, reflecting widening societal divisions in the lead up to presidential elections, which Sisi is expected to win if he runs.

The Egyptian Center for Economic and Social Rights reports on its database Wiki Thawra that 21,317 people were arrested from Morsi’s ouster July 3 to the end of the year. Pro-military nationalism spurred by the army takeover often manifests as vocal support for crackdowns, arrest or imprisonment for political dissidents. Many in the crowd outside the courthouse voiced their support for the arrest of “traitors.”

“We like Egypt how it is, with its poor and ugly and bad and garbage and everything. If you don't like it, just leave,” a woman yelled at Fattah and Abdel-Rahman supporters.

“The army and the people are one hand,” others in the crowd around her chanted.

An uploaded video of the confrontation received more than 12,500 views in 24 hours.

Fattah’s sister, activist Mona Seif, stood quietly with friends and family members on the steps leading up to the courthouse, holding a colorful sign showing Fattah against a blue sky, holding up a peace sign. Below the words “Free Alaa Fattah” stretched imagery of barbed wire. Another picture showed Abdel-Rahman’s arrest on the street.

Fattah was arrested at his home on Nov. 28 when police officers broke through his front door, assaulted him and his wife and seized computers and phones without a search warrant, Seif said. An arrest warrant had been issued for Fattah and April 6 Youth Movement leader Ahmed Maher for organizing a protest on Nov. 26 against an article in the draft of the new constitution that permitted civilians to be tried in military court.

Two days before that protest, a law had been issued by interim President Adly Mansour prohibiting demonstrations held without prior notice to the government. Police used water cannons and tear gas to disperse activists, arresting at least 51 people, including Seif. She and the other women were later released on a desert road, said Seif, who founded the No to Military Trials for Civilians campaign that organized the protest.

Although Seif and other women from the campaign have stated in public and submitted to the prosecutor in writing that they were responsible for the protest, arrest warrants were issued for Fattah and Maher, said Fattah’s aunt, prominent writer Ahda Soueif. “Alaa is in prison because he is Alaa,” she said.

This is the fourth government that Fattah has been arrested under. Abdel-Rahman, on the other hand, was swept up in arrests for a protest he was not attending, Seif said. A security guard who travels to work in Cairo from the southern governorate of Aswan, he had been walking past the police dispersal, and had tried to help a few women activists, she said. When police searched his belongings, they found a small knife among his toiletries and clothes. He has been detained in prison ever since, she said.

Well-known internationally for his activism and blogging, Fattah has released a few widely shared essays from prison, most recently a piece published in Arabic in the privately owned newspaper Al-Wady and later published in English by Mada Masr, in which he wrote that “autism is a good metaphor for our condition, … a child losing — or not having — the ability to speak with a generation gradually losing its ability to chant.”

He described detainees arriving from Abu Zaabal prison after allegations of torture there.

“We receive them with a detailed report about the facts: There is no torture here but you're probably here to stay, the law means nothing and the constitution offers no hope and the courts are worth nothing. We shall stay until they're done with their damned road map. They reply with similar autism with a detailed report about the torture in a steady mechanical delivery with no embarrassment, no concealment,” he wrote.

The same that day that Fattah’s supporters gathered outside of the courthouse, The Telegraph published smuggled footage filmed by a prisoner inside a maximum-security prison. The footage showed squalid conditions and included accounts of torture.

Seif visited her brother at Tora Prison last week. He appeared to be in better spirits than before, she said, due in part to the release of a few activists, including Khaled el-Sayed, who was arrested during the anniversary of Egypt’s 2011 uprising. At the same time, 11 of their activist friends have since been sentenced to two years in prison, she said.

President Mansour issued a decree last fall that allows the public prosecutor to indefinitely renew detention every 15 days pending investigation. A judge decides if the suspect will be held until trial. Fattah has had his detention period officially extended twice, and has remained in jail without seeing a judge, his sister said.

There is no longer any difference between imprisonment by court order or by administrative detention, said Soueif, his aunt.

As Soueif spoke outside of the courthouse, the opposing side moved closer, climbing up the steps to stand alongside Fattah’s supporters, yelling accusations and curses as police officers watched. “You sons of bitches,” one woman yelled repeatedly.

One of Fattah’s supporters began moving angrily toward the crowd, but was stopped by Soueif, who told him, “We don't cuss, we don't beat, we don't do anything like that. Let them do whatever they want.” He sat down on the steps, shaking his head silently.

Nearby, activist and actor Khalid Abdalla, who recently appeared in the Oscar-nominated documentary “The Square,” watched quietly. “It’s not just Alaa, it’s many others,” he said. “We have to attempt to stand for what we believe in. And it’s no problem for other people to have other points of view, that’s what we’re fighting for.”

“There’s no denying we’re going through a dark period,” he added.

Fattah’s aunt announced that his supporters were leaving because the allotted hour they had requested was ending, “not because anyone is making us leave.”

“I hope one day we don't have to stand this way for anyone like you,” she added to the opposing crowd, who chanted back, “Leave, leave!”