Demonstrators are calling for the repeal of a law requiring notification in advance for peaceful protests. 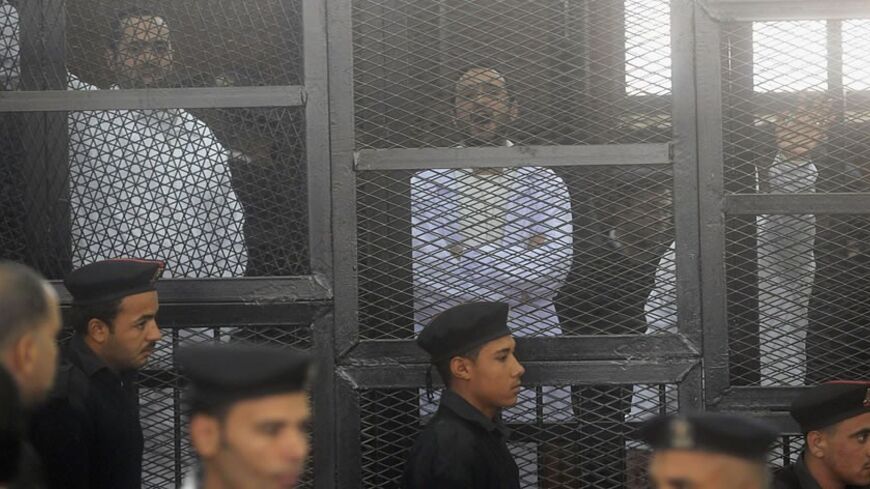 CAIRO — Before sunset, Nourhan Hefzy sat on a curb outside the Ittihadiya presidential palace in the upscale suburb of Heliopolis. Across the street, a dozen men and women faced rush hour traffic, holding up signs with images of detained activists.

Two security officers gazed idly at them from their chairs behind barbed wire fencing. They had previously asked the activists to leave, saying a sit-in is illegal under Egypt’s protest law. But Hefzy, a petite brunette, replied firmly, “We are here to protest the law.”

Hefzy had called for a sit-in at the palace this past week after a court upheld a three-year prison sentence for her husband, Ahmed Douma, and April 6 Youth Movement founding members Ahmed Maher and Mohammed Adel. Her call was part of a nationwide campaign this month demanding a repeal of the law, under which the three were sentenced.

Now that a number of detainees are seeing their appeals rejected, activists are renewing pressure on President Adly Mansour to repeal the law he issued and release the detained.

“We will not accept somebody stopping us from protesting peacefully,” Hefzy told Al-Monitor. “We will protest until we get our rights back, even if they are going to kill us.”

The law, issued in November, requires protesters to notify authorities in advance of protests and imposes heavy jail terms and fines for violations. Events this month against the law included a marathon in which activist Alaa Abdel Fattah jogged carrying a picture of detained journalist Abdullah Elshamy. Fattah was released in March after more than 100 days in detention on charges of breaking the protest law, and is currently awaiting trial.

The events culminated in a march to the presidential palace on April 26, where hundreds of protesters stopped just before barbed wire fencing, behind which riot police stood.

“Freedom!” and “Down with military rule!” they chanted. Alongside a wall surrounding the palace, three boys spray-painted images of their detained friend. A lone man carrying a poster of former Defense Minister Abdel Fattah al-Sisi, who is now running for president, was swarmed by a group of men. After a light scuffle, they tore up his poster.

Near the skirmish, Muslim Brotherhood graffiti on concrete blocks read, “Sisi, criminal of Rabia.” Sisi is widely viewed as the public face of July’s ouster of President Mohammed Morsi of the Muslim Brotherhood, and the subsequent violent crackdown on Morsi supporters at sit-ins in Rabia al-Adawiya and Al-Nahda squares, leaving nearly 1,000 dead.

Although their anti-Sisi sentiments align with those of the Brotherhood, activists did not plan events on Friday, the day of the week the Brotherhood has held protests since Morsi’s ouster. “Our demands and situation is different than theirs,” Hefzy said. She had tweeted that any Brotherhood members would be kicked out of the sit-in, drawing criticism from their supporters.

The dividing lines in Egypt are deeper than ever before as landmarks continue to host protests by rival camps, with each having thousands of members detained in prison. But so-called “revolutionary activists” opposed both to Islamist and military rule are carefully managing when and where to appear to avoid association with the Brotherhood.

The perhaps ironically named Ittihadiya, or “Unity,” presidential palace is known as the site of bloody clashes during Morsi's rule in late 2012, and as one of the sites in 2013 that hosted massive anti-Morsi rallies in June that led to his ouster. Today, the palace is host both to pro-Morsi protesters and revolutionary activists opposed to Islamist rule, military rule, the current interim government and any future government ruled by either of the two presidential candidates — Sisi and Nasserist politician Hamdeen Sabahi.

“There has never been a chance for the revolutionaries to hold power, for somebody who really believes in freedom and democratic principles,” Tarek said at the palace.

When Morsi, Egypt’s first democratically elected president, issued a constitutional decree in 2012 that gave him sweeping powers, activists chose the palace as the site of a sit-in. Morsi’s supporters attacked, sparking a bloody battle, for which Morsi is now facing trial.

Even then camps with the same goal — to remove Morsi — were divided. As Morsi supporters and a mix of opponents clashed, the pro-army, anti-Morsi camp chanted, “The people and the army are one hand,” and posed for pictures on tanks. Meanwhile, street artist Omar Fathy painted a mural on a wall blending the faces of Mubarak, the military man who replaced him, Field Marshal Hussein Tantawi, and Morsi.

“Since the revolution we have wanted a civilian president. I’m boycotting these elections again because they are a joke,” activist Sabah Fawwaz Ibrahim told Al-Monitor at the palace this week. Her son, a 14-year-old activist named Ali, said his friend Walid had organized people to hand out pamphlets against the constitutional referendum in January.

“They were sentenced to three years in prison,” he said.

Demanding the release of detainees now is a move grounded in justice and practicality, Tarek said as she stood outside of the palace on April 23, holding a sign with the image of a detained activist. The Egyptian Center for Economic and Social Rights reports on its database Wiki Thawra that 21,317 people were arrested since Morsi’s ouster on July 3, 2013. Activists believe thousands more have been arrested since the start of this year.

“The problem is most Egyptians are in Sisi-mania,” Tarek said. “Now when we demand the fall of the regime, we don't receive support from the people and they attack us. So a lot of activists are saying we have to concentrate on releasing the detained. After they are released, and we have our numbers back, we can again seek all our demands.”

Their numbers in the streets have dropped significantly, and Hefzy admits that on the government side, “no one is listening” yet to their demands. Mansour reportedly met with the state-run rights watchdog the National Council for Human Rights last week, and was reported as saying that the current climate requires a continuance of the protest law.

At the same time, knowing that people on the outside are trying to help repeal the law and win his release is lifting her husband’s spirits in prison, Hefzy said.

“We are making people listen on behalf of those who are in jail,” she said. “We have rights we fought for with our blood, and we're not going to let it go.” 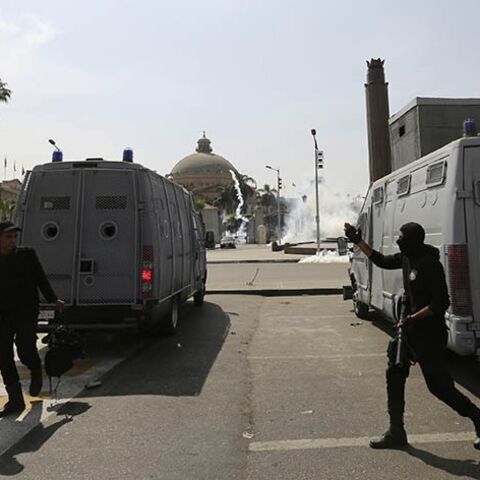