Has Egypt Lost the Plot?

Egyptians seem to have forgotten the initial goals that fueled uprisings against the Muslim Brotherhood and the denial of human rights. 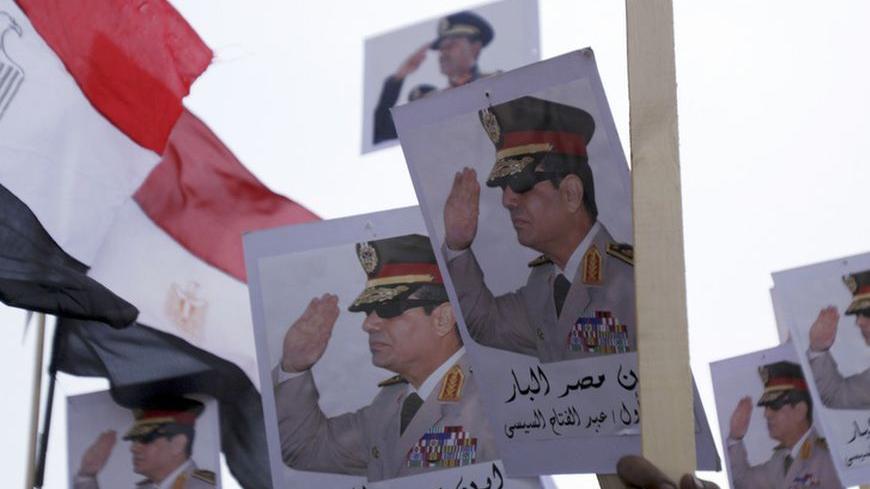 Posters of General Abdel Fattah al-Sisi are seen as supporters of the army protest against ousted President Mohammed Morsi and the Muslim Brotherhood at the tomb of late Egyptian president Anwar Sadat, during the 40th anniversary of Egypt's attack on Israeli forces in the 1973 war, at Cairo's Nasr City, Oct. 6, 2013. - REUTERS/Amr Abdallah Dalsh

CAIRO — Posters of Defense Minister Abdel Fattah al-Sisi outnumbered all other trinkets sold or distributed during the street celebrations for the 40th anniversary of the October 1973 War. The day turned into "Sisi Fest," rather than a celebration of Egypt's armed forces, during which a campaign for the general's presidency found large numbers of supporters.

It was just in July that Sisi and the army’s proclaimed disinterest in the post was used as evidence against referring to the removal of President Mohammed Morsi as a coup. At the same time, the military’s intervention was hailed as necessary to prevent possible bloodshed. On Oct. 6, however, there was none of that. No one was calling for a civilian president or state during festivities juxtaposed by deadly gunfire. More than 50 people were killed, and Egyptians either cheered or found justification for it. The reaction to such deaths has been the same since some 1,000 people were killed in the dispersal of pro-Morsi sit-ins and subsequent clashes in August.

When the military-backed government was formed in July, Mohamed el-Mahdy was appointed to the new post of minister of transitional justice and national reconciliation. Today, no one is talking about reconciliation, and those who do are ostracized. The consensus on the best way to deal with the Muslim Brotherhood and other Islamists is through the heavy hand of the security apparatus, including unlawful killings, arrests and loosely justified detentions. Reports of torture in prisons and other abuses do not find an attentive, alarmed audience, but numerous justifications. The interim cabinet recently approved a draft law, disputed during Morsi’s term, restricting the right to demonstrate and strike.

It seems that somewhere between June and August, the country and its people lost the plot, their own plot. The political aspirations that fueled their opposition to the Morsi administration appears to have been forgotten, or sacrificed, along the way.

For a year under Muslim Brotherhood rule, Egypt’s opposition decried the clampdowns on personal and religious freedoms, the impunity for deadly security abuses, the lack of justice for all, exclusionary policies and the passage of a constitution that cemented such actions as long-term policy.

Now that the opposition is in the military-backed government and the new assembly charged with amending the Constitution, or is supporting them, the ship is not being rerouted toward its expected destination. One article of the Constitution giving Al-Azhar authority beyond its traditional educational role might survive the amendment process along with dubious others, such as one providing the state a role in deciding which religions are acceptable to believe in. Political and civil rights feature little in terms of positive developments. Military trials for civilians and restrictions on labor unions are likely to remain. For those currently following the discussions on the Constitution, the problem might seem to be, as the columnist Ahmed Samir wrote, “that the Brotherhood were excessively liberal.”

The threat the Brotherhood arguably posed to Egypt’s cultural identity seems to be related to the organization being Islamist. A small faction of the opposition to the Brotherhood had adopted a discourse that does not object to similar practices under a different leadership, or replacing one dictator with their own dictator, as the rights activist Sherif Azer explained in his description of the “anti-human rights revolution.” This faction’s sanctioning of extreme versions of oppressive and deadly measures has only found a larger receptive audience through a mightier unifying cause.

"It’s a war on terror." "Egypt fighting terrorism." For more than a month, state- and privately-owned TV channels have plastered television screens with such assertions during their broadcasts. Reports of deadly attacks on army and police units in Sinai have become almost daily occurrences. Less frequent reports of authorities finding undetonated explosive devices all over Cairo have exacerbated tensions and fears on even relatively quiet days.

Whether mentioning the Brotherhood by name or not, many public figures stress that there's a war under way, among them former presidential candidate Hamdeen Sabahi and Tahani al-Gebali, former vice president of the Supreme Constitutional Court. TV host Ibrahim Eissa simply calls the Muslim Brotherhood a “terrorist organization” while demanding that disagreeing voices admit to a war going on. As the Arab saying goes, “No voice is louder than the battle’s.” What was once viewed as temporary has gradually become the norm. Casualties are considered necessary sacrifices or collateral damage, “within the acceptable range,” as the Ministry of Interior pronounced at a news conference Al-Monitor attended on Aug. 14. Declaring a state of emergency becomes necessary, along with the suspension of most rights. It’s a war and national security is at stake.

Muslim Brotherhood members might be right in decrying the overblown terror charges against them and their alleged links to terrorist activities, but their claims of being the scapegoats of a conspiracy ignore their actions in implicating themselves and other Islamists.

During Morsi’s rule, his supporters painted themselves as moderates preventing a much more violent and radical alternative from taking hold. These ultraconservative factions were portrayed as a threat in cahoots with and controlled by the Muslim Brotherhood. Al-Jamaa Islamiyya leader Tarek el-Zomor, imprisoned for three decades for involvement in President Anwar Sadat’s assassination, addressed crowds, promising that the opposition “would be crushed on June 30.” Following Morsi’s ouster, former Brotherhood MP Mohamed el-Beltagy proclaimed that attacks in Sinai would stop as soon as Morsi was reinstated. He also said, however, that there were no connections between the groups launching attacks and the Brotherhood, but that was irrelevant to those listening.

In the buildup to June 30 and July 3, protesters in Rabia al-Adawiya would make sure journalists were filming whenever their colleagues were sloppily jogging in formation carrying wooden sticks. They wanted their opponents to see them as fierce and intimidating. Deadly clashes with residents of the neighborhoods surrounding their sit-ins provided such imagery and statements with tangibility. Assaults on churches by men chanting for Morsi and against what they deemed as a war on Islam could be traced to sectarian chants nurtured at pro-Morsi sit-ins.

Brotherhood members are partly right, but if theirs was a trap set by security and state institutions, they willingly walked right into it and convincingly played their part. Their biggest problem is that people took their threats seriously.

The Brotherhood both won and lost the battle of perception. The groups declaring responsibility for attacks in Cairo and in Sinai are automatically linked to the Brotherhood, all lumped together in a larger Islamist front prone to violence. The damage extends to their opponents, now falling into the same trap of paying the price for contributing to the creation of false perceptions. Disillusionment with the opposition to the Brotherhood clouds clear judgment when it comes to identifying perpetrators, the real size of the threat, and the causes of the crisis, many of which continue to exacerbate the situation.

Instead of focusing on the goals that fueled the uprisings against the Muslim Brotherhood and others, Egypt is dragging itself into a vicious circle of violence under false assumptions of sustainable solutions to political crises — that is, repeating the Brotherhood’s mistakes one by one. Sacrificing the social and political aspirations for building a better future constitutes losing the plot.

Sarah el-Sirgany is a Cairo-based independent journalist. She contributes to Al-Akhbar in Lebanon and CNN, among other regional and international publications and networks. She was the deputy editor of the Daily News Egypt and co-authored Diaries of the Revolution. On Twitter: @Ssirgany