International backlash against a draft law strictly regulating NGOs in Egypt could dissuade the Muslim Brotherhood from pursuing the initiative. 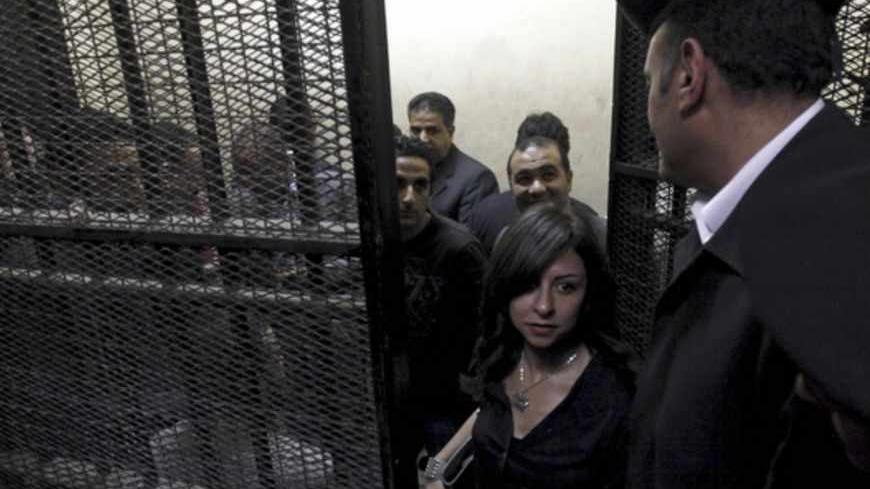 Activists accused of working for unlicensed non-governmental organizations (NGOs) and receiving illegal foreign funds stand in a cage during the opening of their trial in Cairo, March 8, 2012. - REUTERS/Mohamed Abd El Ghany

CAIRO — The year-and-a-half-long investigations, trial and sentencing of NGO workers in Egypt have been embroiled in politics, affecting both foreign relations and a draft law regulating civil society.

The June 4 sentencing of 43 Egyptian and foreign workers on charges of operating NGOs without licenses and receiving illegal foreign funding is the culmination of the xenophobic sentiments nurtured by different rulers during and after the Egyptian uprising. The case has been used to justify restrictions in a new draft NGO law, and the verdict could deter foreign organizations and donors that want to work in Egypt.

Yet, the resulting international backlash could steer the draft law toward more openness; many involved in the discussions believe that such pressure was the reason behind the partial elimination of the restrictive language decried in earlier drafts. Local lobbying has lacked the furor and the leverage to get the attention of the government, since the upper house of Parliament (the Shura Council) — given temporary legislative powers following the dissolution of the lower house — put it up for discussion in late February.

The governments and groups that condemned the verdict last week linked it to the legislation. While expressing concern about the verdict, the European Union, which last November pledged 5 billion Euros ($6.64 billion) in aid and loans to Egypt, said in a statement that it remains committed to adopting “an NGO law fully in line with international standards and Egypt's commitments under international human rights law.”

The Carter Center urged, in a statement on June 6, “President Mohammed Morsi and members of the Shura Council to take proactive and positive steps to create a climate conducive to full participation in public life in Egypt, both in law and in practice.”

Morsi’s intervention to mitigate the effects of politics on the trial is almost impossible; he has sour relations with the judiciary and his Islamist allies had condemned what they deemed foreign intervention channeled through these NGOs. His only back door is concessions in the new draft law.

At a time when Egypt is starved for foreign aid, loans and investments, it would be reckless to endanger its already fragile foreign relations. But on the other side of the equation is the control the state and its security arms would like to have over NGOs, especially those that expose its violations and shortcomings.

Members of the Muslim Brotherhood, with which Morsi is affiliated, say that the argument is about the sovereignty of the state and its basic right to regulate itself. Civil-society workers say the government wants the power to punish and silence those giving it headaches.

“The law gives absolute freedom, within the framework of the law and the constitution, to civil-society organizations. Secondly, it’s within a regulated framework, regulated by the state. We are not a tribe. We are a 7,000-year-old state with rules and systems,” Mohamed Akef, board member of the Federation of Non-Governmental Organizations, told Al-Monitor.

The judiciary will always have the final say, providing necessary balance, added the Brotherhood member who has been taking part in drafting the legislation since 2012.

The Brotherhood’s Freedom and Justice Party first presented a draft law to Parliament in early 2012 that was welcomed by civil society. “It was 90-92% consistent with international standards,” said Mohamed Zaree, the program manager at the Cairo Institute for Human Rights Studies, which is involved in discussions of the draft law.

Back then, the balance of power did not favor the Muslim Brotherhood: Under the then-ruling military council, the presidency bid, which the group later won, was a far-fetched and unsure bet, and its landslide win at the People’s Assembly elections (with 47% of seats) was shaky. The Parliament was dissolved shortly before Morsi won.

While the xenophobic propaganda continued under Brotherhood rule — borrowing from both former president Hosni Mubarak's administration and military governments that blamed foreign hands for instigating instability — the NGO draft law seemed safe from the resulting sentiment. The law was expected to be relegated to a newly elected, and hopefully more representative, Parliament.

The then-banned Muslim Brotherhood was expected to wait for the new law to officially register itself, which gave some activists hope the group would push for a law friendly to their and its work. That changed when a judicial panel recommended the dissolution of the group. On the same day, the Brotherhood announced its registration under the reviled 84/2002 law. Since then, discussions of the new legislation have been expedited.

Abdel-Azim Mahmoud, head of the Shura Council’s Human Development Committee tasked with discussing the draft law, said ratification of the law would take the time it needs to ensure all concerns are taken into consideration. At a meeting with Al-Monitor at his office opposite the hall in which the community hearing sessions were held, the Salafist MP blamed the media for turning international public opinion against their work.

Part of this media hype was a response to official statements. In March, Mohamed El-Demerdash, the legal consultant for the Ministry of Insurance and Social Affairs, said the ministry rejected some applications for foreign funding because they were aimed at spreading homosexuality and promoting the Baha'i faith. Later the same month, Omar El-Sherif, the deputy justice minister, told MPs that the goal of the draft law is to address the loopholes that facilitated the transgressions presented in the NGO trial.

The draft law introduces a steering committee that would approve foreign funding to local NGOs and license foreign organizations. Akef explained that this committee merely brings all the concerned entities to one table, making it easier for the NGOs to work with them. Critics say it allows the state to intervene and impede their work using bureaucracy and vague wording of some articles.

“The best feature of the new draft law is that NGOs can be established by notification. But then, I can start an NGO but can’t make it work. This is what the law is all about,” Zaree said.

A culture of donations, apart from the traditional charities, doesn’t exist in Egypt. Many organizations, especially those specialized in defending rights, depend on foreign grants for survival.

Security bodies are believed to be a main force pushing for these restrictions behind the scenes. Earlier drafts stipulated a security representative at the steering committee. The change in later drafts — made after a backlash and the legislators’ unwillingness to be the first to make security approval on NGOs a law — reflects the relation between the Brotherhood and the security services, staggering between age-old antagonism and pragmatic compromises. The security representative isn’t clearly spelled out but is not ruled out, either. “Relevant ministers” will choose the state representatives, read the draft law, obtained by Al-Monitor.

Days before the June verdict, the presidency submitted a new version of the legislation. It responded to some of the criticism regarding the wording of some articles but it maintained the same issues critics have found problematic, primarily the steering committee.

This week, the Shura Council will be discussing this version. Many believe that the government won’t make more concessions. Yet, some of the civil-society workers involved in the discussions hope putting Egypt back in the spotlight would at least postpone the approval of the draft law until there is a new elected Parliament.

Sarah el-Sirgany is a Cairo-based independent journalist. She contributes to Al-Akhbar in Lebanon and CNN, among other regional and international publications and networks. She was the deputy editor of the Daily News Egypt and co-authored Diaries of the Revolution. On Twitter: @Ssirgany