The verdicts in the case prove the timidity of the Obama administration in engaging with the failures of Egypt’s democratic transition. 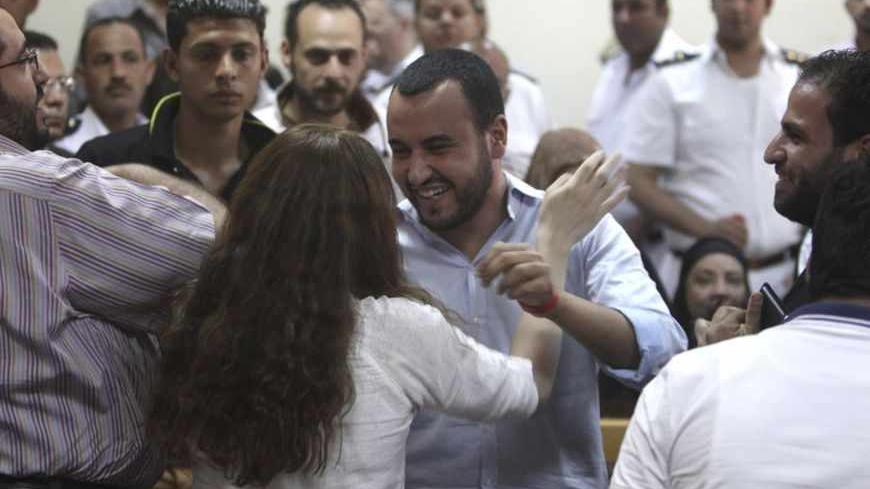 Friends of Egyptian suspects react after hearing the judge's verdict at a court room during a case against foreign non-governmental organizations in Cairo, June 4, 2013. - REUTERS/Asmaa Waguih

The Cairo Criminal Court slammed 43 NGO workers — including 19 Americans, 16 Egyptians, along with Germans, Serbs, Norwegians, Palestinians, and Jordanians — with prison sentences ranging from one to five years and 1,000 Egyptian pound fines in convictions on June 4 in the so-called foreign funding case. The case, which dragged on for a year and a half, followed indictments in February 2012 accusing staff of international non-governmental organizations (NGOs) of working for unlicensed institutions and receiving illegal funding.

One of the most severe crackdowns on Egyptian civil society in recent memory, the case is a microcosm of larger failures. For Egypt, it is a continuation of Mubarak-era paranoid thinking and sham justice within the Egyptian state apparatus. Both are now used actively by the Mohammed Morsi regime or given a pass as they serve the regime’s purposes in tightening its control over the state. The case furthermore exemplifies the duality of Egypt’s simultaneous resentment and dependency on Western powers.

From another perspective, the case points to the repeated timidity of US President Barack Obama's administration to engage on the failures of Egypt’s democratic transition. The verdict also highlights the failure of the respective NGOs to deal with the case proactively, which would have involved vociferously reiterating their innocence throughout and protecting their staff members.

Of the 43 defendants, none are expected to actually go to jail. Those in imminent threat of imprisonment have all fled the country. The 11 Egyptians, who received one-year suspended sentences, only stand to be imprisoned if they are found to engage in “similar activities” within the next three years. All of the defendants are expected to appeal the case.

In December 2011, with the Supreme Council of Armed Forces holding power, Egyptian security forces raided the Cairo offices of the US-based pro-democracy and human rights National Democratic Institute (NDI), International Republican Institute, Freedom House and International Center for Journalists. They also descended upon the Germany-based Konrad Adenauer Stiftung. They seized documents and equipment from each office and froze the organizations' funds. The NGOs were accused of violating Egyptian state sovereignty by illicitly supporting the political opposition and promoting protests.

From the beginning, the case was seen as a political action rather than the resolution of a legal issue over the distribution of international donor funding. In April 2011, two months after the ousting of President Hosni Mubarak, the United States Agency for International Development (USAID) had distributed $65 million to civil society groups in Egypt. Angry that the funds had not been channeled through the government, Minister of International Cooperation Fayza Abu el-Naga spearheaded a “fact-finding mission” with the Ministry of Justice to investigate unlicensed, foreign-funded civil society organizations in August 2011. They warned that groups found guilty could be charged with treason.

While the organizations and governments were initially outraged by the raids and issued censorious statements, their outspoken condemnation and involvement with the case greatly decreased after all of the foreigners, except Robert Becker, a political party trainer with NDI, fled the country in March 2012 on an American plane after the judge dropped the travel ban on the accused for two days due to US pressure.

Although it was the work of the organizations being scrutinized by the Egyptian government, it was individual staff members who faced felony charges. The NDI staff has been the most outspoken about the lack of organizational support, raising serious concerns about the labor practices of international NGOs in regard to the treatment of their local staffs. It was made clear from the beginning that the safe departure of international staff was NDI's priority, and once that happened, communication with national staff significantly diminished. Apart from paying for the salaries and legal representation of all of their staff, NDI provided little other support or guidance to the Egyptian staff members. In an October 2012 interview with Al-Ahram Online, Becker charged, “How dare we come to Egypt, operate and hire Egyptian staff, convince them it is a good organization to work for and then abandon them?”

The NGO case initially strained US-Egyptian relations, but in the end, it marked yet another episode in Egypt’s regressive post-revolution transition in which the Obama administration failed to hold the Egyptian government accountable for repressive actions. Egypt annually receives more than $1.3 billion in military aid and $250 million in economic assistance. In March 2012, one month after the formal charges, former secretary of state Hillary Rodham Clinton cited US national security interests in waiving part of the legislative conditions on foreign aid to Egypt relating to the democratic transition. She also certified to Congress that Egypt had met its obligations under the 1979 Camp David peace treaty with Israel.

On May 10, Clinton’s successor, John Kerry also waived the democracy conditionality on US military aid to Egypt. This year, however, there was no public notification of the waiver, and the Daily Beast reported on June 6 that most of Congress had been unaware of the decision. In a statement on the day of the verdict, Kerry expressed tepid concern over the “politically motivated trial.” He did not threaten any consequences as a result of the verdict or address a draconian draft NGO law supported by Morsi.

The case represents the bipolarity of Egypt’s simultaneous dependency on foreign financial support, especially from the United States, and its deep-rooted paranoia about meddlesome “foreign fingers.” Egypt’s strategic location astride the Suez Canal, and its shared border with Israel, has made it the interest of foreign powers for years, and Egyptian politicians have long scapegoated the failures of the Egyptian state on foreign subversion. The SCAF and Morsi’s regime have both eagerly embraced this strategy, as had Mubarak.

Presiding Judge Makram Awad’s preamble to the verdict, shared in a post by Tarek Radwan of the Atlantic Council, exemplifies the politicized paranoia behind the case. “Under the former regime that … prostrated before America’s will to normalize relations between Egypt and Israel, foreign funding for civil society organizations emerged as a manifestation of this normalization policy. They aimed to undermine and dismantle state institutions … to serve American and Israeli interests which surpassed those of the Egyptian people.”

The legal handling of the case speaks to a legacy of kangaroo justice and a judiciary in which political agendas, not legal arguments, drive rulings. Most telling, Becker, was found guilty of starting his NGO six years before he even arrived in Egypt. In a similar vein, the International Center for Journalists claims that it had not even started the journalist training program for which its staff was indicted. Furthermore, as highlighted in a February 2012 statement issued by 31 Egyptian civil society organizations, “Even before the trial has begun, the Ministry of Justice, other government parties, and the two investigating judges have been conducting a one-sided trial in the media … with the goal of smearing civil society.”

The statement also noted that both judges investigating the case had served as chief prosecutors in the Supreme State Security Prosecution, which became infamous for fabricating charges against opponents of the Mubarak regime and covering up torture by security services.

Many observers argue that this verdict paves the way for further crackdowns on Egyptian civil society. The battle over civil society rages on as the Shura Council began debating the president’s draft NGO law on the same day the foreign-funding verdict was issued.

While international pressure and resistance by local civil society organizations have kept the heavy-handed draft law in debate for many months, the June 4 verdict is a sign that if civil society is to have a fruitful, engaged future in Egypt, all international and local efforts need to rally to prevent the passing of the current bill. The foreign-funding case was not the doing of Morsi’s regime, but its proposed NGO law and acquiescence to the verdict reflects a continuation of Mubarak’s repressive and controlling approach toward civil society. Under Mubarak, many such restrictions were implemented indirectly, but the draft NGO law proposes they become the legal standard.

The May 29 version of the draft law quashes civil society’s independence. It grants the government the authority to block internal decisions and activities of groups as well as forces NGOs to submit copies of all internal decisions, report on annual activities and produce an annual financial statement for the government. It also creates a coordination committee responsible for authorizing the acceptance of all foreign funds by groups.

As Hafsa Halawa, one of the 43 defendants, aptly articulated on June 4 on Twitter after the verdict was announced, “There isn’t much anyone can do for the NGO trial. We are prisoners of a corrupt legal system. But we can help civil society. Fix it.”