Is Egypt's Trial of NGOs Setback for Democracy?

In December, Egyptian police raided the Cairo offices of 10 NGOs, including four American ones, accusing them of improperly filing registration paperwork and receiving illegal money from outside the country for political campaigns. Al-Monitor's Tulin Daloglu interviewed Robert Becker, one of the two Americans staying to fight the charges. 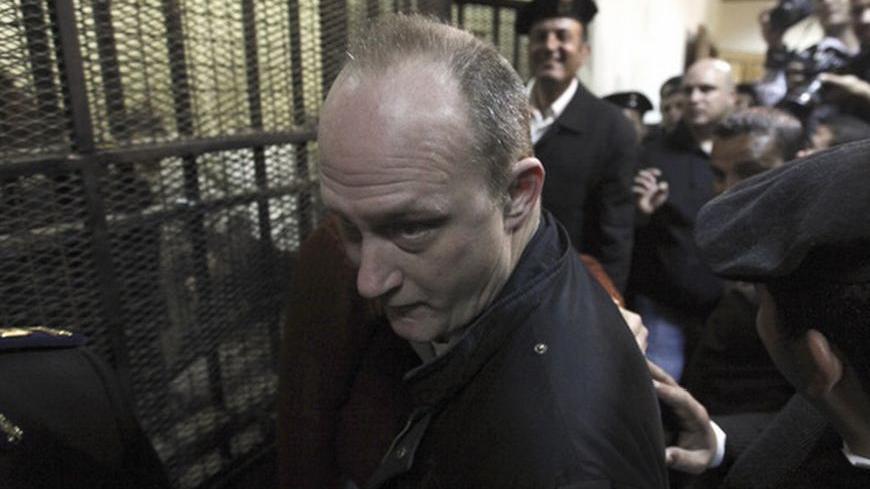 American Robert Becker of the National Democratic Institute (NDI) leaves the defendants' cage during the opening of their trial, in Cairo March 8, 2012. - REUTERS/Mohamed Abd El Ghany

UPDATE: After a brief session on Tuesday, Oct. 2 — the trial's shortest so far — the trial was adjourned until Nov. 3, when the judge most likely will listen to closing arguments.

Amid the euphoria of the Tahrir Square revolution last year, the US-Egyptian relationship hit a hard bottom when the Egyptian police raided the Cairo offices of 10 NGOs in December, including four American ones — the National Democratic Institute (NDI), the International Republican Institute (IRI), Freedom House and the International Center for Journalists. A total of 43 staffers, of which 19 were American citizens, were accused by mismanaging the NGOs by not filing the registration paperwork fully in accordance with Egyptian law, and therefore receiving illegal money from outside the country and spending it illegally on political campaigns.

There has been a lot of water under the bridge since then, but the trial is still far from over. On Tuesday, October 2, the Cairo Criminal Court will resume, hopefully for the last round of witness testimony. “I have no idea what my schedule is on October 3,” said Robert Becker, one of the two Americans staying in the country fighting the charges, in an interiew to Al-Monitor. “I just want them over. We all want to get our lives back.”

On March 1, when a US military plane took the accused Americans and other foreign nationals away from Egypt, Becker defied the orders of NDI’s Washington, DC bureau to get on the plane. Trusting his innocence of the charges, he made a once-in-a-lifetime decision despite being “scared.” “Two of the four Egyptians charged from NDI worked directly for me,” Becker said. “What kind of a person would say, “I am going off to the US; be safe, best of luck; I hope you don’t get sentenced to six years in prison.”

When the plane took off, he remained behind as the only American willing to appear in an Egyptian court, which prompted the NDI to suspend his contract. Although they continue to pay his legal fees, Becker remains a lonely American in the Cairo courtroom.

At his first appearance before the judge in March, the police asked everyone to line up as lawyers and defendants so that an identification check could be made. The officer thought Becker was standing in the wrong line. “So I handed him my US passport and my handwritten summons to appear,” Becker said. “He looked at it and said, 'Welcome to Egypt!'”

Since then, he has appeared before the judge eight or nine times. As he does not speak Arabic, he is at a significant disadvantage in terms of understanding what’s being talked about in the courtroom. “In the Egyptian court system, all the defendants in felony trials are held in a mesh cage. So the acoustics are really bad,” he said. “Even my colleagues who do speak Arabic, we can barely hear what the testimony is. So, it is long. It is hot. There is no place to sit. It’s basically 16 people standing in a cage straining to hear what’s going on, wondering if we’re going to be there for two hours or six hours.”

Becker believes that this trial as a whole is a setback for Egypt’s fledgling democracy. “For democracy to work, citizens have to be able to organize and express themselves without fear … It’s a lot of non-governmental organizations around the country that are operating under fear,” he said. “One of the things we’re trying to convey in the country is that we’re an NGO, and it is not a scary word.”

Becker was “teaching political parties and candidates and activists in Egypt as to how to organize a campaign, how to give media interviews, how to properly observe the polls and how to interpret election law.” He has been managing political campaigns for the last 23 years throughout the US and around the world. Therefore, he was a perfect fit for the NDI job.

“When January 25 happened, this was pretty much a one-party state. The NDP — the National Democratic Party, Mubarak’s party — dominated the scenery. There were never fair and free elections,” he explained. “After the fall of Mubarak, and the opening up the political process, when I got here in June 2011, there were well over 100 political parties that were in the process of trying to formulate.”

In that context, Becker trained the members of the Freedom and Justice party — the Muslim Brotherhood’s party — as well as members of the Salafist-based Al-Nour party, liberals, nationalists and socialists, all without favoring one over any other. As he will appear before the judge once again on Tuesday, Oct. 2, he is hoping that his innocence will be read on his face in the courtroom.

“We know there is no evidence to prove our guilt,” Becker said. “We look forward to justice being served, and hear the not-guilty verdict.”

Tulin Daloglu is a journalist and foreign-policy analyst based in Ankara, Turkey. She tweets at @TulinDaloglu