Those arrested in the crackdown on supporters of former President Mohammed Morsi face seemingly indefinite incarceration. 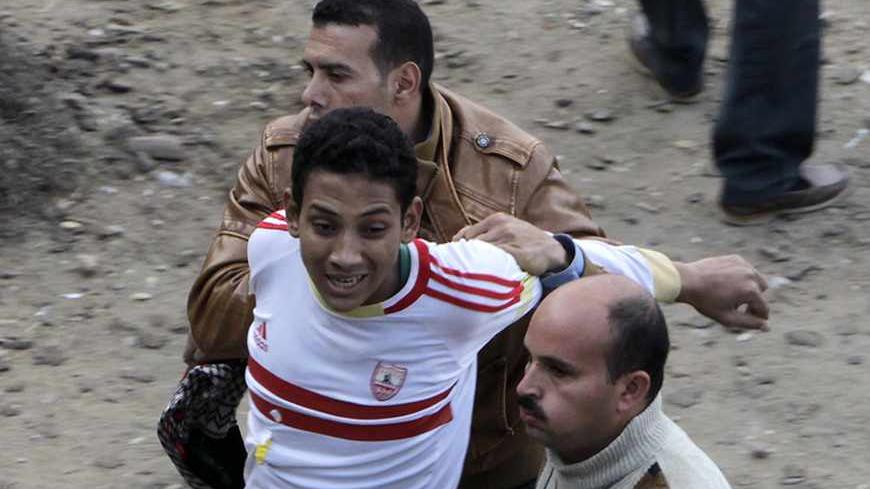 CAIRO — As the interim government continues its crackdown on protesters and leading activists are being detained, other protesters are being held in jail for months while prosecutors continuously renew their detention for 15 days.

It has already been nearly 2½ months since Omar Assaf, a financial analyst and father of three small children, was dragged from his house by a dozen armed Egyptian special forces troops at 2 a.m. on Sept. 23. At first, nobody knew what had happened to him, but later they found out that he had been arrested for planning a strike and incitement of riots against the police.

He and five other detainees facing the same charges have to appear in court for the fifth time. They wore white prison clothes and were locked in a cage while they waited for the judge to appear. Omar’s mother and wife cannot attend the trial, but when they pay the policemen 20 Egyptian pounds ($2.90), the guards let them in for a few minutes.

A pregnant women whose husband is standing trial for the same things Omar is accused of doesn’t have that kind of money. Since they arrested her husband, she hasn't known how she could pay the bills and support her children.

Finally, after hours of waiting, the judge arrived.

"Why are you doing this to me? I’m already poor, I make 400 pounds ($58) a month, and my wife is pregnant with my third kid. Please, let me out!" the husband screamed desperately.

The judge looked at him and said: "Are you done?"

Omar, who participated in the protests against former President Hosni Mubarak in 2011, didn’t agree with the brutal crackdown of the army against Muslim Brotherhood protesters in August. As a person who was involved in charity work, he took food and water to the protesters at the Rabia al-Adawiya compound.

Ever since President Mohammed Morsi was deposed, the government has mounted a major crackdown on his supporters, killing hundreds and arresting thousands more. Omar was one of those arrested.

In the weeks after the mass shootings, he received strange phone calls. An unidentified man said he saw him at Rabia al-Adawiya and threatened to hand him over to police if he didn't give him money. Omar, who had no criminal record, decided to ignore the threats. After that, he was arrested for planning a strike in a company he doesn’t even work for and incitement of riots.

Omar’s family hired two lawyers, Ahmed Helmy and Moukhtar Nouh, but they cannot get him out.

"The charges are just an excuse. They knew he was at Rabia and that’s why they detained him," the lawyers told Al-Monitor.

They explained: "At first, only people who supported the Muslim Brotherhood were targeted and hated, but now everybody who stands up against the military-backed Egyptian government forms a threat, like the activists."

Prominent activists such as Alaa Abd El Fattah, who was detained last week, get more media attention than people such as Omar and his fellow inmates, so there has been a shift in public awareness: The anger in Egypt is rising as the interim government continues its crackdown on protesters. The verdict against the 21 women and girls who were sentenced to 11 years in prison for taking part in anti-coup-demonstrations was condemned by the majority of the Egyptian population.

One of the prisoners who was accused of committing the same "crimes" as Omar couldn’t take the pressure anymore and tried to commit suicide. Conditions in prison are very poor, the families told Al-Monitor.

"In a cell of 12 square meters [130 square feet], around 18 prisoners sleep, eat and use the toilet," Omar told Al-Monitor in a split second when the reporter was allowed to enter the courtroom.

He looked tired and nervous, just like the others in the prisoners' cage.

"Prisoners sleep on one side instead of their backs because of the lack of space. All day long they cannot even stretch their legs. There is no ventilation or sunlight, which makes inmates suffer from skin diseases," Omar’s sister Aya told Al-Monitor.

Prisoners who committed crimes like theft get to spend three hours in the yard, but political prisoners only get an hour to see daylight. Egyptian prisons are well-known for their brutal treatment of prisoners, which often includes humiliation and torture.

Aya added, "When someone is sick, he screams for hours. If the guard finally takes him to the hospital, they make him sign a paper saying that he received treatment, but of course they don’t get any medicine at all."

When Egyptians revolted against President Hosni Mubarak in 2011, it reflected their unhappiness with government corruption and police brutality. Many Egyptians are now receiving the same treatment after Morsi's ouster amid a series of violent incidents and arbitrary arrests.

Scores of detainees have been deprived of their basic legal rights, such as medical care or access to lawyers, Amnesty International reported.

Suzan Fayet of the El Nadeem Center in Cairo acknowledges that torture and humiliation are common in Egyptian prison cells and that detentions often are renewed when the district attorney doesn’t have enough proof to convict them. "We are witnessing a return of the old Mubarak regime, whereby Egyptians get arrested massively and human rights are being neglected, just to shut protesters up," she said.

At the end of the day, the lawyers told Omar’s family —  after hours of waiting and bribing policemen — that he and the other inmates got another 15 days in custody pending investigations. In his prison uniform and with handcuffs on, he was pushed into a van by one of the guards.

The pregnant woman tried to hug her husband one last time, but the guard didn’t allow it.

"You already said goodbye to him upstairs," he screamed angrily.

Omar’s family ran to him and handed over a big bag of food. In Egyptian prisons, there hardly is any water and the families of the detainees have to bring food for their loved ones every week.

"We are very disappointed, Omar didn’t do anything wrong," his mother told Al-Monitor.

She concluded, "There is no justice in Egypt."