A young Syrian rebel fighter recounts the horrific experience of spending more than three months imprisoned by the radical Islamic State of Iraq and al-Sham (ISIS). 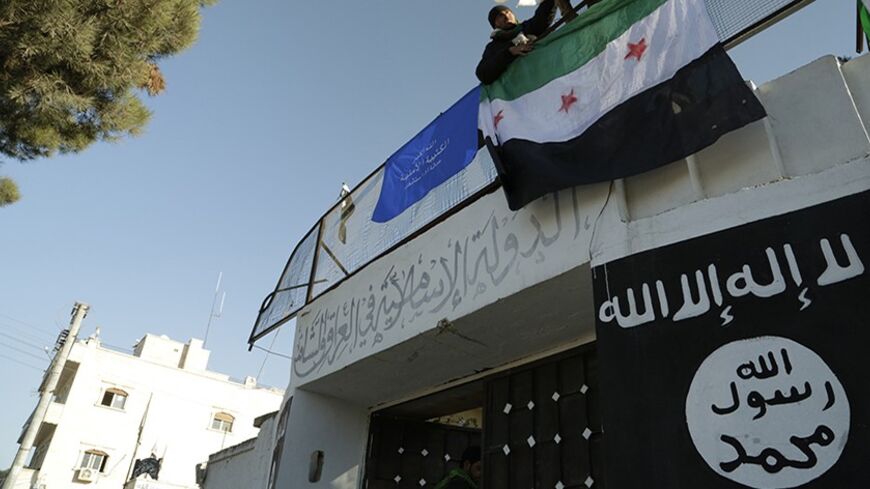 Free Syrian Army fighters erect the Syrian opposition flag atop a former base used by fighters from the Islamic State in Iraq and al-Sham (ISIS), after it was captured by rival rebel forces in Manbij town in Aleppo, Jan. 8, 2014. - REUTERS/Nashwan Marzouk

GAZIANTEP, Turkey — It had been 20 days since Mohammed's arrival in Turkey, after having spent more than three grueling months inside prisons run by the notorious Islamic State of Iraq and al-Sham (ISIS) in Syria. Mohammed, 20, came to Gaziantep from the Syrian town of Al-Bab in Aleppo province, where ISIS has imposed a strict interpretation of Sharia since capturing it in September 2013. Smoking is prohibited, women must wear black niqabs and arbitrary trials and detentions take place daily.

The large bump on his forehead is one of the many scars that provide a glimpse into Mohammed’s story.

“I can still remember four Syrians from Damascus who got out of the bus and started smoking. They were immediately beaten by ISIS militants,” Mohammed, not his real name, said while smoking a cigarette in a coffee bar in the Turkish city.

With his dark blue jeans, checkered shirt, bright blue eyes and skinny body, Mohammed looks like a high school student rather than a fighter, but according to him he fought ISIS and President Bashar al-Assad's regime for over a year. Before the war started, Mohammed went to school and worked in his father's shop in Al-Bab, like so many other Syrians of his age.

In September 2013, a month before Mohammed’s arrest, ISIS had taken over an important military base in the middle of Al-Bab. Assad’s forces attacked the base often, but the strikes killed mainly civilians instead of opposition fighters. As a result, civilian protesters, supported by opposition groups like the Islamic Front and the Free Syrian Army, took over the streets, asking ISIS to withdraw from the city. Clashes occurred, and Mohammed, who fights for the Islamic Front and before that the Free Syrian Army, shot a few ISIS fighters.

“And then they came after me," he told Al-Monitor. “ISIS fighters even arrested my brother and father, so that I would turn myself in. But I didn’t, so they released them after a few days."

On Oct. 15, during the celebration of Eid al-Adha, Mohammed was walking toward his home to visit his mother in secret when he was captured by ISIS fighters. They blindfolded him, secured his wrists and took him to a prison somewhere in Aleppo. He doesn’t know the exact location, but he told Al-Monitor that it had to have been in the suburbs, as he didn't hear a lot of traffic and the car ride took roughly half an hour.

Guards didn’t talk to him for the first two days in prison, but when the "investigation" started on the third day of his capture, masked militants began beating him. Torture methods included electricity shocks and hanging him upside down from the ceiling. The cries and screams of other inmates were constant, but he doesn’t know exactly how many people were detained, as he was put in a separate cell with only one other person. There was no electricity, only a small window without bars.

“I shared a cell with an Alawite officer. They were beating him so severely that the whole cell was covered in blood," Mohammed said. He had been forced to watch.

He added that he was forced to sleep in his cellmate's blood, who told him that he hadn’t seen his three children for more than two years.

“Outside the prison I would probably hate him like I hate Bashar, but inside the cell we supported each other. God bless him."

Two days later, the Alawite prisoner died from his wounds. He had bruises all over his body after severe and repeated beatings. The next morning, guards removed the corpse, but Mohammed said that dead bodies usually weren’t removed from prison immediately.

During his three-month detention, ISIS militants moved him to two other prisons. They were most likely captured governmental buildings, Mohammed said, as he slept in rooms that resembled old offices rather than prison cells. Twice a day, guards gave him water and sober meals with boiled potatoes and bread, but he had to sleep on the floor with no carpet or blankets.

In the second prison, he shared a room with a decapitated body for days. The stench was overbearing, and he tried not to look to avoid vomiting. There were no other prisoners in the room, but he was assured of the presence of other detainees in the building because of the regular screams.

Mohammed recalls that one day, ISIS fighters tortured a man for smoking inside the prison.

A few days later, he also saw an old, frail and pale-looking prisoner — guards called him Najim — collapsing outside while he waited for his turn to use the toilet. Whenever an inmate wanted to use the toilet, he had to ask the guards first, as it was located in a wooden shed in the yard. Mohammed doesn’t know why Najim collapsed, as he didn’t know him personally, but he believes he died after being tortured or maybe starved to death.

“He looked weak, sick, and he couldn’t even walk in a straight line anymore," Mohammed continued.

After Najim died, ISIS fighters left him lying on the ground for days, until the body started to rot.

The brutal ISIS rule has been well-documented, most recently by an Amnesty International report released in December 2013, which detailed killings, arbitrary trials and detention and the abuse of children as young as eight. However, according to Mohammed, it is even worse than one could ever imagine.

“There is no law, so everything is allowed," Mohammed said, lighting another cigarette.

Mohammed stared at the lighter for a few seconds while inhaling the cigarette smoke, then continued his story. He hardly showed any emotion during this interview, answering all questions in a calm manner. No screaming or yelling, but the painful look in his eyes was always present. Sometimes, when asked about the dead bodies, he narrowed his eyes and frowned, as if he didn’t want to think about it anymore.

Mohammed tried to escape the ISIS torture prison by climbing over the fence behind the toilet in the yard, but his attempt failed. When guards saw him running in the field behind the fence, they opened fire and caught him after a few minutes.

As a punishment for his attempted escape, guards put him in solitary confinement for more than a week, where he was repeatedly tortured. They hung him from the ceiling by his feet, beating him with sticks while screaming, “We are going to kill you.” Mohammed’s shoulder became dislocated from the beatings, and his entire body was covered in bruises.

"I screamed, of course. It hurt a lot," Mohammed recounted.

Except for a rotting corpse, he didn’t have cellmates during his stay in the second prison, and after a few weeks, guards moved him to another location to interrogate him again. There, he was not allowed to speak or communicate in any way with other detainees.

“When the masked men left to fight, they gave me extra food and said, 'May God protect you if we never come back,'" Mohammed recounted, adding that this kind of treatment was part of the psychological abuse he endured every day.

“The door was locked, so if they had died, I would have died, too."

After spending three months in several prisons, Mohammed was freed by the Islamic Front, after fighters took back certain areas in the neighborhood. The first thing Mohammed did after being released was to visit his parents, even though he knew this could have led to another arrest. He hugged his mother and father, who were surprised to see him alive, and fled to Turkey almost immediately afterward. Mohammed recounts his own surprise at making it out alive, given the horrid conditions of the ISIS prisons.

“But honestly, I think I’m going back to fight the regime and ISIS again. We have to finish what we started. The Syrian people want freedom," he explained, adding that a lot of fighters go to Turkey for a short period before returning to the battlefield.

Mohammed only stayed in Turkey for 23 days. While writing this article, I learned that he had gone back to Syria.