While supporters of former President Hosni Mubarak celebrated his release, others in Egypt lament that many activists still languish behind prison bars. 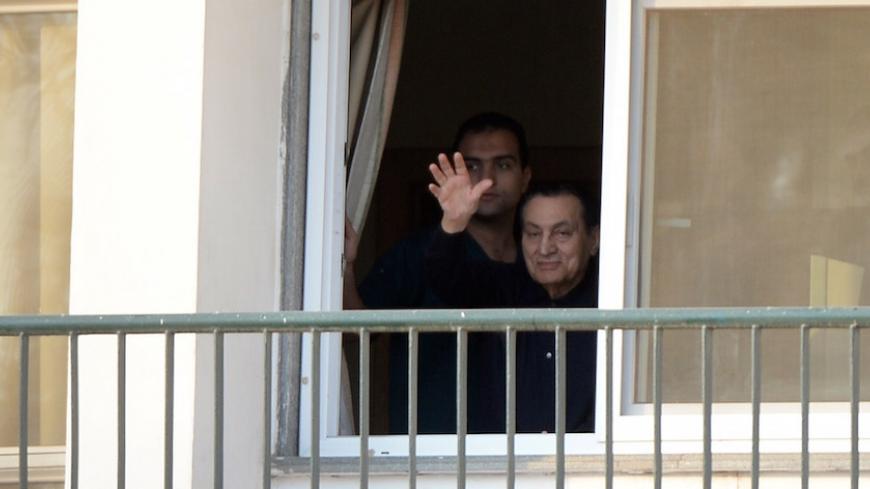 Egypt's former President Hosni Mubarak waves from his room at the Maadi military hospital in Cairo on May 4, 2015, as his supporters gather outside the building for his birthday. - GETTY/Mohamed El-Shahed

On March 24, former Egyptian President Hosni Mubarak was freed from detention after he was cleared earlier this month of the charge of ordering the killing of hundreds of protesters during the 2011 mass uprising that toppled him. He discreetly left the military hospital in southern Cairo where he had been under house arrest for the last six years to return to his home in the upscale Cairo district of Heliopolis.

Egyptians received the news of his release with mixed reactions. Many of his supporters were overcome with joy, saying the revolution was a “foreign conspiracy” and that his acquittal “is long overdue.”

“Mubarak is my president to this day. I am delighted to hear that he has returned home,” Amgad Zekry, a 29-year-old taxi driver, told Al-Monitor. “He is a hero of the October 1973 war and should never have been subjected to such humiliation. Egypt was stable and secure under his rule,” he added.

But for the pro-democracy activists who took to the streets six years ago demanding “bread, freedom and social justice,” Mubarak’s release is a “hard blow,” dashing what little hope they had left for positive change. Lawyer Malek Adly, who was released in September after spending four months in jail for challenging President Abdel Fattah al-Sisi’s decision to hand over two Red Sea islands to Saudi Arabia, considers it a telling moment.

“I’m not surprised. The crimes of the current military regime are worse than those committed by Mubarak. If around 900 protesters were killed during the 18 days of the 2011 revolution, an equal number of opposition protesters were massacred in a single day of violence during the forced dispersal by security forces of the pro-Muslim Brotherhood sit-in at Rabia [Square] in August 2013. Tens of thousands of Islamist supporters and liberal activists are behind bars for opposing the regime. Mubarak’s release is a blatant example of the selective prosecution that exists, bearing testament to the increasing politicization of the courts,” Adly told Al-Monitor.

Sisi has repeatedly denied any interference by the executive branch in the affairs of the judiciary. In a televised speech he gave in April 2016 on the occasion of Egyptian Judiciary Day, he told senior judges gathered in the High Judicial Court that he respects judicial rulings and would never interfere in the legal system.

In the course of the last three years, the convictions of tens of thousands of Islamist supporters of ousted President Mohammed Morsi, liberal activists and journalists — many of them in mass trials described by international rights groups as “farcical” and “politically motivated” — have raised questions about the independence of the judiciary under Sisi’s rule. Critics claim that the country’s judiciary, which enjoyed some degree of autonomy from the executive branch under Mubarak despite his attempts to curb its independence, is today being used as “a tool of repression to crush dissent.”

A flagrant example of the increased politicization of the judiciary is the harsh verdict against prominent political activist Ahmed Douma in the case referred to by Egyptian media as the “Cabinet Clashes” (violent confrontations that broke out on Dec. 16, 2011, between security forces and pro-democracy activists staging a sit-in to protest the appointment of Kamal El Ganzoury, a Mubarak-era Cabinet minister, as prime minister). On Feb. 4, 2015, a Giza criminal court found Douma guilty of rioting, inciting violence and attacking security forces and sentenced him and 229 other defendants (who were tried in absentia) to life in prison. Douma was also fined 17 million Egyptian pounds (about $940,000 at the current exchange rate) for damages to the Egyptian Scientific Institute, a historic building located near the Cabinet headquarters that was burned during the protests. On hearing the verdict, Douma laughed and clapped sarcastically from his courtroom cage, saying, “That is enough. I’m happy with the verdict.” The tongue-in-cheek comment was enough to earn him an additional three-year sentence for “contempt of the court.”

The ruling, the harshest against members of the April 6 Movement that mobilized protesters for the revolt that brought down Mubarak, has been denounced by rights advocates as “unreasonably excessive."

“It was clearly meant as a warning message to silence all dissenters,” Adly said. He believes Douma was caught in the middle of a dispute between his defense lawyers and Judge Nagy Shehata. The judge referred defense lawyer Khaled Ali to the prosecution for investigation for “insulting the judiciary” after Ali suggested that Shehata was “biased against the defendants.” The Lawyers’ Syndicate has since called on lawyers to boycott hearings presided over by the judge in protest of his excessive verdicts and his blatant prejudice against liberal activists and opposition figures.

No stranger to controversy, Shehata provoked an international outcry in July 2014 when he sentenced three Al Jazeera journalists to between seven and 10 years in jail on charges of belonging to a terrorist group and spreading misinformation to tarnish Egypt’s image — charges that rights groups said were “utterly baseless.” The judge is also behind death sentences handed out en masse to scores of Muslim Brotherhood members and supporters.

When Douma was convicted in the 2015 Cabinet Clashes trial, he was already serving a three-year sentence with hard labor. He and fellow founders of the April 6 Movement Ahmed Maher and Mohamed Adel were arrested in December 2013 on charges of organizing and taking part in “illegal protests” outside the parliament building in defiance of a controversial law criminalizing protests held without prior authorization from the Interior Ministry. Adel and Maher were released in January after completing their sentences but remain on probation for three years. Authorities are concerned about a possible revival of the pro-democracy movement initiated by the social media-savvy activists that brought down the Mubarak regime six years ago.

Douma has staged intermittent hunger strikes to protest his detention conditions. In a letter smuggled out of his prison cell four months into his incarceration, he wrote, “The abdominal pains you feel are not from what you eat; rather, they are from what is eating away at you.”

Ali, one of three lawyers on Douma’s defense team, told Al-Monitor, "Douma spends 22 hours a day inside a 2 by 3 meter [6½ by 10 foot] cell with little access to sunlight and hardly any communication with the outside world. He sleeps on a bare floor and has been denied medical treatment.”

The lawyer added, "His toilet is a hole in the ground that requires him to squat on bent knees — a challenge for Douma, who is suffering from intense lower back pain. We are currently negotiating with prison administrators to allow us to provide him with a plastic toilet seat for greater comfort."

Ali and Adly have filed a legal complaint with the State Council demanding that Douma be moved out of solitary confinement, an appeal that is to be reviewed by the State Council’s administrative court April 4. “Solitary confinement should be reserved for violent inmates who have violated prison regulations and should be used for as short a time as possible as it can cause lasting mental damage after a few days. Douma, who has not committed any offenses while in prison, has been held incommunicado for more than three years now,” Ali said.

The legal team has filed an appeal against Douma’s life sentence, to be reviewed by an appeals court April 27. Meanwhile, a social media campaign by Egyptian rights activists and celebrities is calling for Douma’s release, using the Arabic hashtag #Douma’sFreedomIsHisRight. Douma's wife, Nourhan Hefzy, who is allowed to visit her husband once every two weeks, vows to continue to press for his release until the “unjust ruling” is overturned.

“Mubarak and his henchmen walk free while Douma and scores of youth revolutionaries who led the protests against him continue to be denied justice,” she told Al-Monitor. “The counter-revolution has triumphed. It won the day a president with a military background was elected, paving the way for the persistent vilification of the icons of the revolution by regime loyalists, their incarceration on trumped-up charges and their humiliation in prisons."