Those who participated in the January 25 Revolution, who experienced great euphoria but then deep despair, now see a sliver of hope thanks to a recent court ruling. 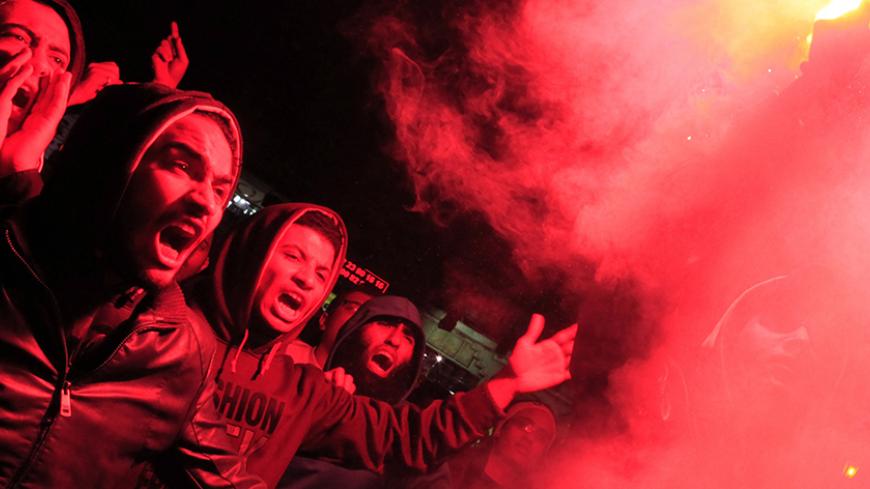 On Jan. 25, 2011, protests demanding “Bread, Freedom and Social Justice” erupted in Cairo and other major Egyptian cities. Inspired by the uprising in Tunisia that 10 days earlier had succeeded in bringing down the autocratic Zine El Abidine Ben Ali regime, the protests in Egypt began as demonstrations but quickly evolved into a full-scale revolt with tens of thousands of anti-government protesters gathering in central Cairo’s Tahrir Square to demand “the downfall of the regime.” When longtime president Hosni Mubarak announced that he was stepping down less than three weeks later, the Tahrir pro-democracy activists erupted into jubilant celebrations that lasted into the early hours.

“We were taken completely by surprise; no one had expected the regime to fall so quickly,” Zeinab Mohamed, a blogger known to her readers as Zeinobia, told Al-Monitor.

Mohamed had fervently tweeted from Tahrir Square about the dramatic events of the popular uprising and has continued to report since on the ensuing turmoil, building up a 226,000-strong following on Twitter.

“I wanted to let the world know what was happening in Egypt at a time when mainstream Egyptian media had failed us by initially ignoring the protests and later by vilifying the Tahrir activists, branding them ‘thugs’ and ‘foreign agents,’” she said.

Describing the political and economic upheavals the country has experienced in the last six years as “a roller coaster ride,” Mohamed recalled there had been moments of hope and others of utter despair. Her most uplifting memories are of the day Mubarak first appeared in court and of seeing the long lines of voters in the first parliamentary elections of 2011-2012. “The apathy had vanished," she said, adding that it was replaced by "enthusiasm and a sense of empowerment.”

For several weeks after Mubarak’s ouster, Egyptians were in a state of euphoria; there was hope and optimism in place of the feelings of frustration and helplessness that had marked Mubarak’s last years of stagnation. On the night he fell, the Tahrir protesters expressed their elation with the spontaneously created slogans “Raise your head high, you are Egyptian” and “Everyone who loves Egypt, come and build Egypt.”

In the immediate aftermath of the uprising, scores of young people had painted curbs and removed garbage from streets in their neighborhoods. After decades of marginalization and oppression, they finally felt they had a stake in their country. Eager to participate in the political process, the young activists joined the new political parties that mushroomed during the early period of transition. The main activists who had mobilized for the January 25 protests joined the Coalition of Revolutionary Youth, a watchdog group comprised of a range of movements from diverse orientations. They piled pressure on the Supreme Council of the Armed Forces (which oversaw the transition) to ensure that the revolutionary demands were met. One of their primary demands was that Ahmed Shafiq, the last prime minister appointed by Mubarak, resign. In a leaked phone conversation aired earlier this month on the privately owned Sada El Balad satellite channel, former reform leader Mohamed ElBaradei was heard telling then-Chief of Staff Sami Anan that the young leaders were unwavering in their position: “Shafiq is the face of the old regime and must go,” the young people had told him. A few days later, Shafiq stepped down after facing off with novelist Alaa Al Aswany in a TV debate.

That was then, but this is now: Six years on, the space for civic engagement that was created in Tahrir Square has been all but completely shut down. Hundreds of young activists are behind bars for violating a controversial anti-protest law passed in November 2013. Their incarceration is part of a wider crackdown on dissent that has seen thousands of opposition figures imprisoned on what rights groups say are “trumped-up charges.” The draconian anti-protest law, which was recently amended, initially required that groups who were planning demonstrations seek prior approval from the Interior Ministry. On Dec. 3, however, the Supreme Constitutional Court ruled the protest ban unconstitutional, giving the judiciary (instead of the Interior Ministry) the upper hand in deciding whether a planned protest should or should not take place. Skeptics dismiss the amendment as “cosmetic,” arguing that violators would still face jail terms of up to five years and that security forces would continue to use excessive force against peaceful protesters.

Prominent activist Ahmed Maher, one of the founders of the April 6 Youth Movement — which played a key role in organizing the 2011 mass protests against Mubarak — was released from prison earlier this month after completing a three-year jail term for reportedly taking part in an unauthorized protest. He remains, however, under judicial supervision. Fellow activists Mohamed Adel, Alaa Abdel Fattah and Ahmed Douma (considered by many to be symbols of the revolution) languish behind bars on similar charges of violating the anti-protest law. Adel is expected to be released in the coming days as he, too, has served his three-year sentence. There is little hope for Douma’s release, however, as he has been convicted of “inciting violence,” attacking security forces” and “taking part in an unauthorized protest” and has been handed down a life sentence, part of a wider security crackdown on political opponents — liberal and Islamist — since the overthrow of President Mohammed Morsi in July 2013.

Four months after the Muslim Brotherhood was outlawed and designated a “terrorist group” in Egypt in December 2013, a Cairo court banned the April 6 Youth Movement on the grounds that the group ”had engaged in espionage” and had “sought to tarnish Egypt’s image abroad.” Members of the group have been persistently persecuted, and several of them have been found dead in mysterious circumstances. The body of cartoonist Hisham Rizk was found in a Cairo morgue in early 2015 and forensics determined that he had died of asphyxiation as a result of drowning in the Nile River. Two other members of the group were shot and killed on separate occasions by unidentified gunmen.

It is not surprising, then, that Esraa Abdel Fattah, an information technology specialist and member of the April 6 group, has kept a low profile the last two years. She decided to quit her activism and steer away from politics, lamenting that she had been labeled a traitor by the very people who had supported her in the early days of the revolution. Furthermore, she had discovered that her name was on a travel ban list — a sign that perhaps she, too, may be prosecuted.

“I have not been investigated or formally charged to date,” she told Al-Monitor, adding that she suspected the decision was related to Egypt’s nongovernmental organizations' "foreign funding case.”

Dozens of civil society members are being prosecuted under the foreign funding case, which dates to 2011. The case was reopened late last year in a move that rights groups say would effectively wipe out civil society activities in the country. A number of those under investigation in the case have been banned from travel and a few, such as rights lawyer Gamal Eid and women’s rights activist Azza Soleiman, have also had their assets, and those of their organizations, frozen.

Until last week, Abdel Fattah had resigned herself to the fact that the revolution had been in vain. “It’s a depressing thought, but I felt I had to move on with my life after all the time that has been wasted,” she said.

But then something happened that gave her a change of heart: Egypt’s Supreme Court ruled against Egypt’s handover of two Red Sea Islands to Saudi Arabia. The court’s decision is final and cannot be appealed. Nevertheless, the matter has now been referred to parliament for “a final decision.”

Abdel Fattah said the ruling has renewed her faith in the revolution. “Our revolution is not dead. As long as there is a new generation of young people refusing to give up and willing to fight the good fight, the revolution shall prevail,” she said.

Mohamed agrees fully: “It may take several years for the revolution dust to settle. Besides, the country is facing serious economic and security challenges and the entire region is in tumult. Last week’s unexpected ruling on the islands is the glimmer of hope we needed to revive our dream of a better future."