The broader Egyptian population is wary of more protests. 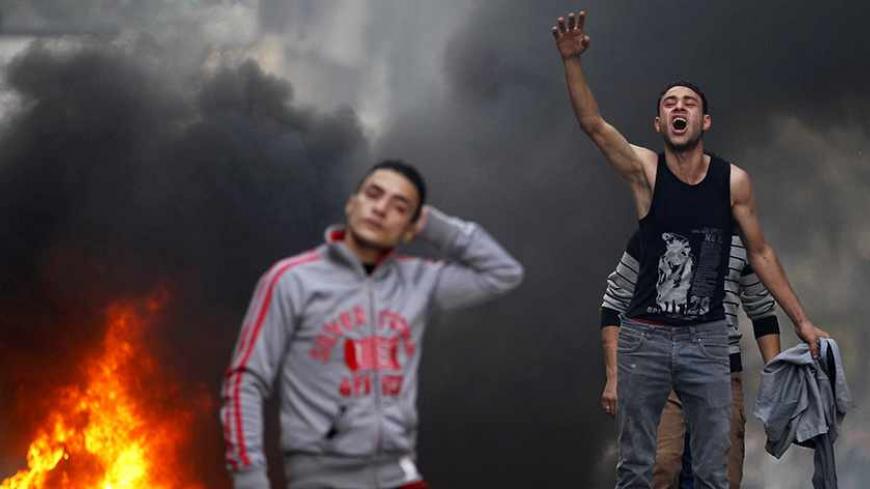 A supporter of the Muslim Brotherhood and ousted Egyptian President Mohammed Morsi shouts slogans in front of tear gas fired by riot police and army, while another looks despondent, south of Cairo, Nov. 29, 2013. - REUTERS/Amr Abdallah Dalsh

“[We] reject the lying SCAF / They speak nothing but lies / And our protest gets us killed or thrown in prison / Nothing has changed … Rise up, Egyptians!”

“[Oh SCAF], what can you to do to people who are used to suffering? / [You can] keep lying from now until tomorrow / Turn the revolution into a memory / Kill us one by one, but I dare you to kill the idea!”

After a tumultuous five months since the military coup in Egypt removed democratically elected President Mohammed Morsi from power, the revolutionaries are slowly returning to the streets. They are few in number. Under the guise of the April 6 Youth Movement, “The Way of the Revolution Front” and “No to Military Trials,” most are young activists who have protested against the oppression of every government that has graced the halls of power since 2011: President Hosni Mubarak in his last days; Gen. Mohamed Hussein Tantawi’s military government; Morsi’s Islamist government; and now, Gen. Abdel Fattah al-Sisi’s appointed transitional government.

Most Egyptians view the activists with suspicion. With the country so vengefully polarized between the supporters of the military and the Islamists and the onset of revolution fatigue, most just long for stability.

At the commemoration of the 2011 Mohamed Mahmoud clashes on Nov. 19, banners around Tahrir Square read, “The Brothers, the army and the old regime not wanted.” In its attempt to claim the symbolic space around the square, the government painted over the memorial of graffiti to the revolution’s martyrs on Mohamed Mahmoud Street in a grotesque pink and red military camouflage pattern and erected a monument to the martyrs in the middle of Tahrir Square. The monument was destroyed and covered in graffiti within hours. The wall running along Mohamed Mahmoud has been covered again with images depicting the military’s brutality — notably, a soldier in full gear with a bloodied mouth surrounded by skulls oozing blood. A sign lies at the base of the pile with the slogan of the revolution, “Bread, freedom and social justice.”

The song “Liars,” released at the end of 2011 during the rule of the Supreme Council of Armed Forces (SCAF) in 2011, could have been released today. After the dethroning of Mubarak in 2011, Mubarak Minister of Defense Tantawi was calling the shots. Now, “First Deputy Prime Minister” and Minister of Defense Sisi, who ran military intelligence for Tantawi, is the kingmaker. Under him, the laws and ways of Mubarak are being resurrected.

For a country that has become infamous for its street politics, the new law on public assembly passed on Nov. 24 is the latest source of contention. Egyptian rights groups, Human Rights Watch, Amnesty International and UN Secretary-General Ban Ki-moon have all condemned the law. Under the new framework, organizers of public gatherers of more than 10 people must notify the Interior Ministry three days in advance of the event. The Ministry of Interior can ban protests or public meetings on the vague basis of “serious information or evidence that there will be a threat to peace and security.”

Of even more concern is the margin of violence with which security forces are allowed to respond: Water cannons, batons, tear gas, rubber bullets and metal pellets are all acceptable. As "Sisi fever" still runs high, the message to activists across the spectrum is clear: The government will not tolerate dissent against its rule.

Already in a frantic rush to close the public space, the government has started arresting prominent activists for violating the anti-protest law. Ahmed Maher, one of the co-founders of the April 6 Youth Movement which was pivotal in the January 25 Revolution, and prominent blogger and activist Alaa Abd El Fattah were arrested in the last week of November while demonstrating against the detention of 24 other activists. Maher and Fattah, along with Mohamed Adel — also a co-founder of the April 6 Youth Movement who has not yet been arrested but faces charges — are all expected to go on trial on Dec. 22, after the initial trial set for Dec. 7 was delayed.

Unpopular among the unchecked outpouring of support for the military since the July 3 coup, these activists have been a voice of conscience, crying out against the military’s massacre of pro-Muslim Brotherhood demonstrators at Rabia and Nahda squares in August. Even though the Brotherhood regime targeted the April 6 Youth Movement during its rule as well, these pro-democracy activists have pleaded with the country: Egyptian blood is Egyptian blood, Brotherhood or not.

Moreover, as one of the groups who organized discreetly under the last years of the Mubarak regime, they know the playbook of repression well: Silence in the face of arrests of others is acquiescence to the inevitability of their own arrest.

In the April 6 Youth Movement’s latest statement on Nov. 30, they make a plea to those who still have a conscience to remember the struggle for a country based on democracy, civilian rule and equality. While much of Egypt may be willing to look the other way this time — exhausted from revolution and appeased by the thought, if not reality, of a military committed to Egypt — it has always been the young who have shed their blood for the rights of the silent majority and the antics of old men — military men, religious men and political men alike.

As they begin their gradual descent into the streets again and the hackles of the government are raised, the youth, the revolutionaries, need a strategy to organize for their vision of the future. Their battle will be difficult with the government co-opting the language of revolution and democracy and deepening the insidious stranglehold of the security state. This time, they need a plan, not the least of which convinces the public of this regime’s brutal nature. Their aspirations for a better future have been foiled too often, and yet, they may be the only voice with any integrity left in Egypt’s political landscape. While protest is absolutely necessary, especially as Egypt is back to the beginning in many ways, it is also not enough.