Young Egyptian revolutionaries express their frustration with Egypt’s past and present rulers. 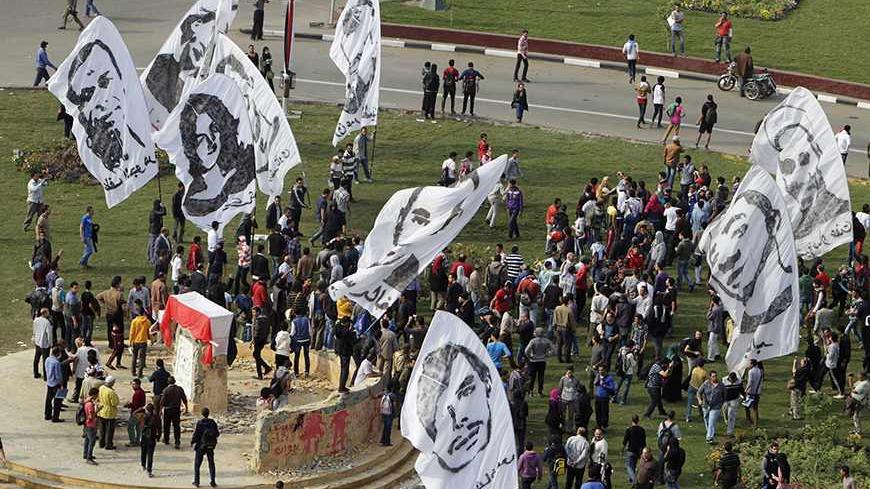 Protesters in Tahrir Square in downtown Cairo wave banners depicting people who died in previous Egyptian revolutions, Nov. 19, 2013. The protesters are gathered around a monument, draped with an Egyptian flag that had been erected in honor of the victims. Earlier, security forces had fired tear gas into the area. - REUTERS/Mohamed Abd El Ghany

CAIRO — In Mohamed Mahmoud Street near Tahrir Square on Tuesday, Nov. 19, hundreds of young Egyptians shouted, "Down with those who betrayed us — the military, Mubarak and the Muslim Brotherhood!" Portraits of Gen. Abdel Fattah al-Sisi and former leaders with ropes around their necks were displayed on the streets and people walked around with posters in honor of their deceased loved ones.

"People may think we left the square, but we never did. We will never forget the people who were killed in our fight for freedom," Sami, an Egyptian revolutionary, told Al-Monitor.

He was proud of the all people who showed up. According to him, the revolution is back on the right track. "We just kept quiet until the time was right again, and now it is. Lord Sisi and his mates have to go."

Thousands of supporters of revolutionary groups such as the April 6 Youth Movement and the Revolutionary Front — groups that oppose the armed forces and the Muslim Brotherhood — gathered in Tahrir Square and Mohamed Mahmoud Street to commemorate the deaths of protesters killed in 2011. The five days of Mohamed Mahmoud clashes between protesters and security forces were named after the street where they took place.

Sami marched in one of the student protests to Mohamed Mahmoud. Some of his friends wore eye patches, commemorating protesters who were shot in the eyes and blinded during the Mohamed Mahmoud clashes, and others wore T-shirts with a three-fingered symbol, symbolizing their being a third force, one that doesn’t support the military or the Muslim Brotherhood.

Like many other protesters, Sami doesn’t trust the military rulers or the police forces.

He said, "Gen. al-Sisi cannot be trusted. All he thinks about is power, not human rights. None of our demands like freedom, social justice and a better economic situation have been realized. Not under Morsi and definitely not under military rulers."

After President Mohammed Morsi was ousted in July, Sisi became the most powerful man in Egypt. Lots of Egyptians think he "saved them from the Brotherhood," but young revolutionaries often have had bad experiences with the military or police forces in Egypt under and after President Hosni Mubarak’s rule.

Although supporters of Sisi showed up and clashes between the two groups erupted on Tuesday, the streets were mainly owned by young revolutionaries who participated in the protests in the January 2011 Egyptian revolution which toppled Mubarak.

Sami added, "We lost a lot of young family members and friends. We are here because we want to make their and our voices heard. Soldiers do not belong in politics."

The day before, on Monday night, a few hundred protesters gathered to remember those who were killed. Family members and friends of young revolutionaries gave speeches and destroyed the newly erected monument on Tahrir Square, which had been put up two days before the commemoration and stirred controversy among revolutionaries. It only took them a few hours to vandalize the memorial with posters and slogans such as "Down with the military."

"It is offensive that the rulers built a monument for the ones they killed," a protester named Mustapha said angrily, referring to the then-ruling Supreme Council of the Armed Forces, or SCAF.

"At first they all said that they would listen to our demands, but when they got the power they wanted, they betrayed us. Everybody: Mubarak, SCAF and Morsi."

The vandalizing of the memorial reflected the young activists’ anger against what they saw as an attempt by the current military-backed rulers to cover up past bloodshed and destroy the revolutionary spirit. However, officials said the monument honored martyrs of the two "revolutions" — the anti-Mubarak uprising and the anti-Morsi protests.

Tamarod, the group that spearheaded the June 30 protests against Morsi and supports the new government, condemned the vandalism and decided to cancel rallies. For the young revolutionaries who have stood up against the ruling powers since January 2011, this proved that the June 30 protests were "guided by military forces to get back in power."

"Why else wouldn’t you come to honor those who stood up for justice and got killed by doing so?" a female protester asked Al-Monitor.

On Tuesday night, the iconic graffiti on the so called "walls of freedom" was replaced by a pink camouflage pattern. The pink stands for blood and the camouflage refers to the army. Around 15 Egyptian revolutionary street artists worked all night to get it done before protests started.

"Like the military trying to hide the truth, all the graffiti is now hidden under pink camouflage," Amr, a graffiti artist and activist, told Al-Monitor.

The Egyptian revolution in 2011 opened the gates for a wave of street art, which had been impossible under Mubarak’s regime, where the Ministry of Culture controlled all public expression. Since then, it has been often used by revolutionaries to express their feelings about the current situation. After the crackdown by the army, Amr made posters of Sisi’s face with the word "joke" on it.

Like many others, he lost friends during the 2011 clashes and right after Morsi’s ouster, when the army shot hundreds of Muslim Brotherhood supporters in a widespread campaign against terrorism. Amr got really frustrated, thinking that history repeats itself with the military in power again. But today, he got back his faith in the future.

"We, the young revolutionaries, are happy that we got Mohamed Mahmoud and Tahrir Square back. The people were great. This proves that the revolution is still alive," he concluded.