Sara Khorshid reports from Cairo on how Morsi's decree has forged a new alignment — among democrats of the 2011 revolutionaries who overthrew President Hosni Mubarak in 2011 and former Mubarak supporters. 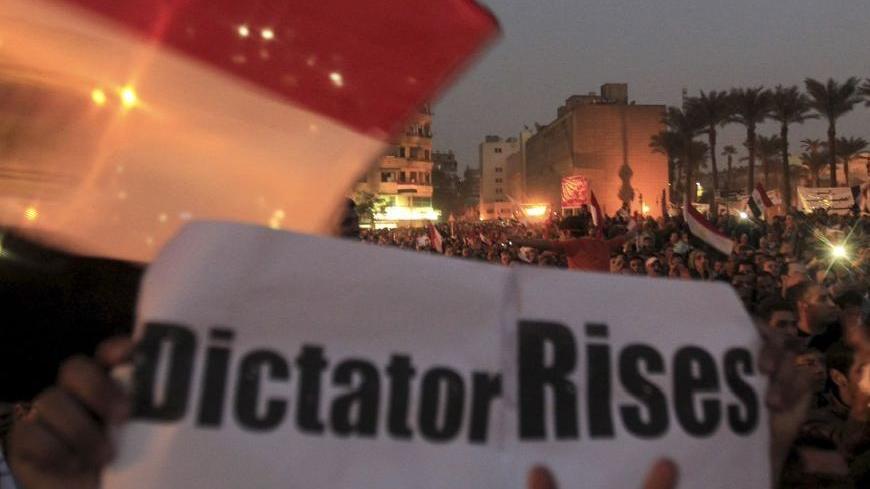 CAIRO — After President Mohammed Morsi issued a constitutional declaration granting himself sweeping powers, including immunity for his decisions against appeal, the country has risen up in turbulence.The scene has the air of confusion. In Tahrir Square and the streets stemming from it, there have been demonstrations, intermittent clashes and a sit-in that lasted for several days till Tuesday's larger number of demonstrators made Tahrir glow while marches roamed Cairo and other governorates.

Earlier Tuesday, not only Tahrir was busy in protest against Morsi's decree, but also the area outside the presidential palace, where other demonstrators gathered around the president as he made the case for his decisions.

When the revolution started in 2011, the division was simply between anti-Mubarak and pro-Mubarak forces. All revolutionaries with various affiliations and orientations gathered in Tahrir; and Mubarak's supporters, who were clearly lesser in number, protested elsewhere.

But this time, Morsi's decree has polarized the country along new lines.

The decree's supporters come from the Muslim Brotherhood movement, from where the president hails. But also some non-Brotherhood Egyptians support it on the grounds that this is the only way for Morsi to "cleanse" the country's institutions and bureaucratic bodies from remnants of Mubarak's regime without facing opposition from courts controlled by Mubarak-appointed judges. They defend the president's new dictatorial powers as "temporary," meant to bolster  Egypt's transition to democracy until the new constitution is enforced.

The decree's opponents include many of the revolutionary forces who took part in toppling Mubarak in 2011 and, interestingly, supporters of Mubarak's regime. The typical adversaries  of the revolution now happen to share a stance with the significant segment of revolutionaries who oppose Morsi's move, even if each camp has a different motive.

While Mubarak's followers would have opposed any president coming from outside the old regime anyway — and they often defend the authoritarian measures and violations adopted in Mubarak's reign — revolutionary forces protesting against the constitutional declaration see it as an infringement on the struggle for democracy and the rule of law. To them nothing justifies the dictatorial powers Morsi gave himself, and there is no guarantee that he won't abuse those powers — after all, history's famous dictators spoke of threats that allegedly forced them to adopt exceptional measures.

And they don't see why they are supposed to trust Morsi or believe claims that his only objective is to protect the revolution rather than safeguard the Brotherhood's control over the parliament's Shura Council and influence in the Constituent Assembly tasked with drafting the constitution — the two entities were granted immunity under Morsi's declaration.

Besides, Morsi's claim of protecting the revolution contradicts what many Brotherhood leaders repeatedly said about "stability" and "gradual reform" as preferred to revolutionary steps.  This was the case when revolutionary forces were protesting against the Supreme Council of the Armed Forces while the Brothers still supported SCAF's decisions, before the two entities eventually clashed.

And while both Mubarak's followers and various — but not all — revolutionary forces reject the decree, many among revolutionaries particularly reject the articles that give immunity to the president, the Brotherhood-dominated Shura Council, and the Constituent Assembly  whose work has received much criticism from across the political spectrum.  Otherwise they agree to the articles on toppling the Mubarak-appointed Prosecutor General and reopening "the investigations and prosecutions in the cases of the murder … of protesters."

There are concerns on the definition of "revolution" and its "goals" in the decree, as in "The president may take the necessary actions and measures to protect the … goals of the revolution." There are disagreements between the Brotherhood and other revolutionaries over whether several decisive protests are considered part of the revolution: Christians' Maspero and the 2011 Mohamed Mahmoud and Cabinet Council protests, for example, were rejected by the Brotherhood." And there are questions on how Morsi defines "social justice," one of the revolution's most famous goals, given his vigorous attempts to receive a loan from the IMF, which could imply the cancellation of subsidies and other welfare measures. Moreover, he lately ratified a law that allows his government to appoints its loyalists to the "Egyptian Trade Union Federation," as reported by Egypt Independent on Monday [Nov. 26].

Both sides exchange accusations. Morsi's supporters accuse revolutionaries of hypocrisy for rejecting a decree arguably issued in response to calls for cleansing off the old regime's remnants. Revolutionaries respond saying they had demanded that Morsi cleanse the judiciary, not subdue it to the president.

The proponents are mostly organized — at least the bulk belonging to the Brotherhood, the most organized movement that survived Mubarak's crackdowns. The opponents aren't. They come from many political parties and adopt different orientations — besides those with no specific affiliation. Which complicates the finger pointing exchange. In each camp there are those who pick on the other's mistakes and generalize, when generalizations are usually inaccurate.

Some voices are calling for a compromise lest darkness looms closer. But the question remains as to whether calm can be reached while Morsi holds on to his decision and many leading figures refrain from condemning violence.  (Several Brotherhood headquarters have been subjected to vandalization attempts, reportedly by angry youth and possibly by infiltrated crowds. There are conflicting accounts of how Brotherhood youth cordoning their movement's property reacts.)

There are revolutionaries who are angry that the revolution's goals have not been achieved and the Mubarak era violations continue unabated under the rule of a Brotherhood president. They are also angry with the Brotherhood's siding with SCAF at times; and their opposition to anti-SCAF protests, pro-social justice strikes, and revolutionary dynamics at times. They feel betrayed.

And Muslim Brotherhood youth are angry.  They are being attacked from different directions, criticized by anti-Mubarak and pro-Mubarak forces, and constantly grilled in the media, often with no sufficient source attribution or thorough fact checking. The movement to which they have felt attached and had a strong sense of belonging since before the revolution suddenly seems like everyone else's enemy. And they think this is not fair.

Meanwhile, Tahrir Square is packed with protesters and there are reports of other protests and violent clashes across the country. Some are even chanting "The people want to topple the regime."

Large numbers have surpassed expectations, because usually neither anti-Muslim Brotherhood protests nor pro-Mubarak/SCAF protests managed to rally significant numbers. The Muslim Brotherhood's response, indicates denial. The movement's official website Ikhwanweb spoke on Twitter of "low turnout" and "lack of support among Egyptians". They insist that the spirit of Tahrir is all about "political aspirations" and "ideological differences". But their statements are "incorrect" and "irresponsible," as described by journalist Rahma Bavelaar, as they refuse to even acknowledge "at least for the sake of diplomacy — that a large and varied section of the population is unhappy.

Sara Khorshid is an internationally published Egyptian columnist and journalist who has written about Egypt and on relations between the Muslim and Western worlds for the past 10 years. Follow her on Twitter: @SaraKhorsid