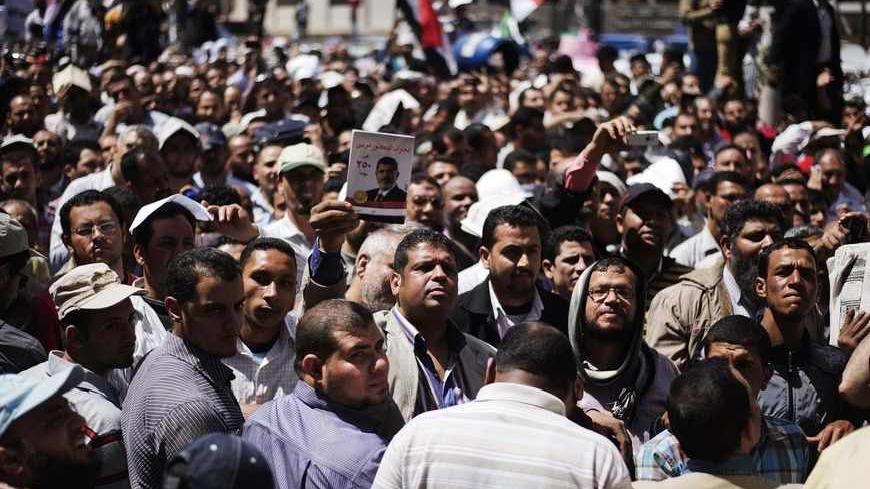 Thousands of Muslim Brotherhood supporters protest in front of the High Court in Cairo demanding a purge in the Egyptian judicial system on April 19, 2013. - AFP/GETTY IMAGES/Gianluigi Guercia

Hundreds of Muslim Brotherhood supporters gathered outside of the High Court in Cairo on Friday to protest against the judiciary. They chanted, “the people want the purging of the judiciary,” and held signs asking for the “retribution of the martyrs.”

On a wall outside the High Court hung a banner outlining protesters’ demands: immediate change of the current judicial law, removal of the justice minister, prosecution of both the head of the Judge’s Club and the former chief prosecutor, and the holding of revolutionary tribunals.

The protest comes in light of South Cairo Criminal Court’s ruling earlier in the week acquitting deposed president Hosni Mubarak of charges of killing protesters during the revolution, although a retrial is scheduled for May 11. He remains in jail on corruption charges. The decision, as well as Mubarak’s visibly improved health and cheerful spirits on Monday, frustrated many Egyptians with the continued delay of justice against the previous regime.

In a jibe at the legal system, one protester Friday held a sign portraying a man symbolizing the judiciary holding a gun to the back of an angel-winged martyr that sarcastically read: “Urgent: martyrs now being arrested on false proclamations and without reason.”

For many of the Muslim Brotherhood supporters, the Mubarak decision is further evidence of a judiciary tainted by “felool,” or remnants of the Mubarak regime. As flyers bearing the faces of the revolution’s martyrs were passed out, protester Youssef Ahmed said, “We are angry because justice has not been done for the martyrs. The current system is just like before, nothing has changed.”

However, Jason Brownlee, associate professor of government and Middle Eastern studies at the University of Texas in Austin, viewed the timing of the anti-judiciary protests as a move to “piggyback the strategic move of Ikhwanizing the judiciary on the popular cause of anti-Mubarakism.” He considered the protests a cover for the Brotherhood’s attempt to push their judicial authority law through the Shura Council. The proposed law would remove many senior-level judges and allow the Brotherhood greater power over the judiciary.

“The judiciary is now effectively the only non-Islamized institution except for the military, but they’re basically supporting the Brotherhood and [President Mohammed] Morsi at this point. In terms of institutions, it’s only the judiciary who provides a counterweight to Morsi’s presidency.”

The proposed judicial authority law comes after ongoing disputes between the ruling Muslim Brotherhood and the judiciary since the Supreme Constitutional Court’s (SCC) decision to dissolve the Islamist-dominated People’s Assembly in June 2012. Both sides, perceived to be at odds over their Islamist and liberal agendas, view each other as seeking to undermine the other’s authority and vision for the country.

Divisions between Morsi and the judiciary peaked in November 2012 after Morsi issued a constitutional declaration immunizing the Constituent Assembly (responsible for drafting the new constitution) and the Shura Council (currently functioning as the country’s only legislative body) from constitutional review. Many viewed this as a pre-emptive move by Morsi against an anticipated SCC decision ruling both bodies unconstitutional and halting work on the new draft constitution. The opposition condemned this as blatant power grab by Morsi and an attack on the judiciary’s autonomy that resulted in days of protests and bloody clashes between opposition and Brotherhood supporters.

The struggle for authority between the judiciary and government continues to lead the country down a tumultuous path. In April, an administrative court declared the election law unconstitutional and voided Morsi’s call for parliamentary elections in April. An appeals court also ordered the reinstatement of the prosecutor general removed by Morsi in November, ruling that the appointment of the current prosecutor general, who has so far toed the Brotherhood’s line, was illegal.

In the eyes of Suhair Abdel Hafez, who attended the protest with her daughter, these moves by the judiciary are proof of its bias. “The judges are supposed to be independent, but they are not. Their decisions are political. We want transparency in the justice system.”

Brownlee questioned this accusation against the judiciary’s independence. Acknowledging that there is need for reform, he pointed out that the judiciary was one of the few institutions that exposed electoral fraud against the Brotherhood under the Mubarak era.

“There’s this great irony in the way that the Brotherhood are turning on people who have been trying to stand up for more pluralism, more transparency, and just general accountability of whoever is in power.”

The proposed judicial authority law would change the retirement age of judges from 70 to 60, which would result in the removal of almost 3,500 judges, or one-third of the judiciary. Brownlee described the law as taking a “hatchet” instead of a “scalpel” to judicial reform.

Brownlee, however, said, “If there was a genuine interest in reforming the judiciary instead of a political monopoly, why not wait until after elections when there is a People’s Assembly with a fresh democratic mandate and then do the judicial reforms.”

On the fringes of the protest, Fawad Mohamed spoke to pedestrians about the need for a complete change of the judiciary. Reflecting the pessimism of many Egyptians with the current political situation, he told Al-Monitor, “A country without a judiciary is not a country at all.”

Anti-judiciary protesters also used the gathering to show their support for Morsi with chants of the president’s name. According to Saeed, “Morsi is a just and fair ruler. God willing, we will make him succeed in the next election also.”

The protest, which was peaceful throughout the day, ended in clashes when Brotherhood opponents descended on the High Court.  Egyptian state-owned news agency Ahram Online confirmed 87 injured from stone throwing and occasional gunfire. Central security forces fired tear gas canisters and birdshot into the crowd in hopes of ending clashes, but fighting continued late into Friday night. On Saturday, Ahram Online reported that police arrested 39 people in connection with the High Court violence.

Citing pressure on him to step down from both the opposition and Brotherhood supporters, Justice Minister Ahmed Mekki submitted his official resignation letter today. He disagreed with the President's decision to change the prosecutor general in November, and most recently denounced the Brotherhood's proposed judicial authority law.

Zenobia Azeem is a Cairo-based freelance writer. She has worked in the field of international election observation for the past five years, primarily in the Middle East. Follow her on twitter @elbowsymmetry.