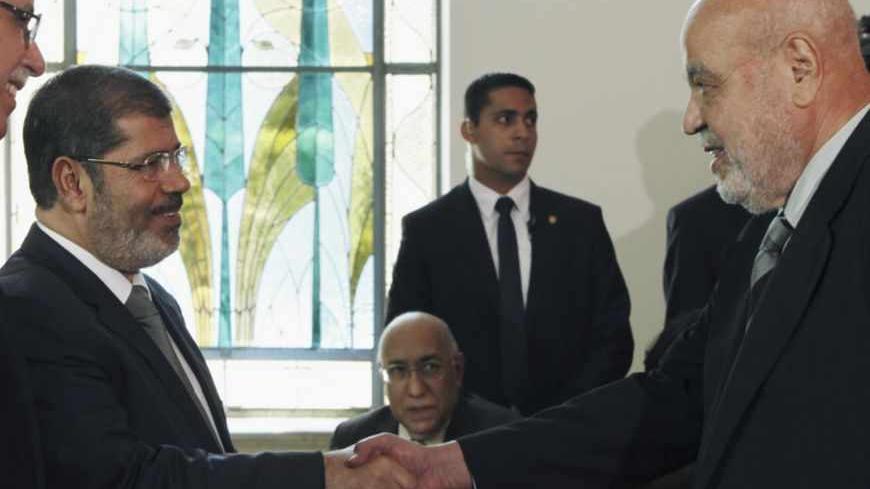 A popular narrative asserts that in 1969, still feeling the sting of the 1967 defeat, Gamal Abdel Nasser sought to impose tighter control over the state, including the ushering in of a more politically aligned and allied judiciary. Much of the judiciary defied his wish, preferring instead that judges stay out of politics and out of the Socialist Arab Union, the one and only political party at the time. Nasser, under the influence of his security apparatus and loyalists in the judiciary, allegedly would not have it.

Reports by Nasser's infamous "vanguard organization," a secret association of regime-sympathizing cadres belonging to the Socialist Arab Union, is said to have suggested to the president that a significant portion of the judicial leadership hailed from the days of the monarchy and held values different from the ideology of the “revolution.” The reports further suggested that there were alternatively many in the judiciary who supported Nasser's vision of it. Those who opposed that vision, on the other hand, were instruments of the “counter-revolution.”

Nasser eventually issued decrees reshuffling the judicial branch and laws, leading to the dismissal of 189 specific judges from their positions. These events later became known as the “massacre of the judiciary.” Nasser’s supporters, however, called it the “purging of the judiciary" and often have a more sympathetic reading of the events.

Fast forward to 2013. Two weeks ago, the Kuwaiti newspaper al-Jarida reported a statement by former Muslim Brotherhood guide Mehdi Akef claiming that 3,500 judges would soon be dismissed by parliament. The story created a firestorm, prompting Akef to deny making the statement and the paper to release an audio recording of it that sounded very much like Akef.

Akef’s rather dubious denial was not aided when the Brotherhood decided to take to the streets on Friday, April 19, to “purge the judiciary” in a protest boycotted by of other leading Islamist groups and emphatically denounced by the opposition. The protesters claimed the judiciary was infested with judges who had risen to power under the former regime and remained sympathetic to it. These judges were allegedly aiding the so-called counter-revolution, determined to fight against revolutionary gains.

Among the protesters’ demands was a new law on judicial authority law that has become the centerpiece of national controversy. Drafts presented by the Brotherhood’s Freedom and Justice Party and the allied al-Wasat parties included cutting the retirement age for judges from 70 to 60. According to several credible sources, it would force the retirement of more than 3,000 judges, adding credence to Akef’s original statement. In a dramatic response, Justice Minister Ahmad Makki —once a hero of judicial independence for Islamists and secularists alike (now fallen from grace among both) and an opponent of the retirement age reduction — officially submitted his short and poignant letter of resignation to President Mohammed Morsi on April 21. Makki, who was widely expected to be sacked in the upcoming cabinet reshuffle anyway, later added he could remain in office if guarantees for judicial independence were put in place.

The judiciary has been in a difficult position since the revolution. There have been long-standing widespread demands by the country’s political forces for a “purge” or “reforms” of the judicial system. The volume of such demands became louder after the majority of cases involving the killing of protesters resulted in acquittals of the police and after the trials of many former regime figures ended in full or partial acquittals or relatively weak sentences.

The judiciary has become increasingly mired in controversy with each step in Egypt’s transition, fueled by its contested supervision of the electoral process and inadequate punishment for alleged violations, the landmark decisions to disqualify high-profile presidential candidates, the restoration of Ahmed Shafiq’s candidacy after his earlier disqualification, the controversial verdicts on the Port Said soccer rioting deaths and former president Hosni Mubarak’s trial and other prominent cases.

At the same time, personal animosities developed between the Brotherhood and judiciary members following the Supreme Court’s dissolution of the 2012 Islamist-majority parliament. Exacerbating such sentiments were the delay in the results of the 2012 presidential elections, the ruling to suspend Morsi’s decree calling for parliamentary elections in 2013, the decision (under appeal) calling for the one-year imprisonment of Prime Minister Hisham Kandil for not implementing a court decree returning a privatized company to the state, the verdict annulling the instatement of the president’s controversial, handpicked prosecutor general (thus opening the way for the return of his even more controversial predecessor), and the Judges’ Association’s strong stance against Morsi and the Brotherhood.

Hostility toward the judiciary was particularly obvious in Morsi’s controversial declaration in November 2012 shielding him and the Islamist-dominated Constituent Assembly from judicial oversight. Furthermore, the new Islamist-drafted constitution downsized the Supreme Constitutional Court by eight judges, leading to the dismissal of those viewed as hostile to the Islamists’ agenda. It also curtailed the courts’ powers to only exercising constitutional oversight of laws before their official enactment.

When tasked with ruling on the dissolution of the Constituent Assembly and the Shura Council, the Constitutional Court was famously surrounded in an intimidating Islamist sit-in. The court has found itself regularly delaying its verdicts, which is seen by many as an attempt to avoid plunging itself further into the current political conflict and the result of successful intimidation against it; it is alternatively seen by others as an attempt to retain some measure of political pressure on the brotherhood and the presidency. Another notable confrontation was the Brotherhood-dominated Shura Council’s adventure over the past several weeks involving the electoral law. The council had attempted to take advantage of the crude wording of the new constitution to circumvent resending the draft electoral law to the Constitutional Court after amending it; the court had struck down the first draft over districting and other concerns. The council’s attempted maneuvering was then blocked by the Administrative Court.

Judicial reform, or even judicial purging, in a post-dictatorship environment is nothing new and is sometimes a necessity. Regardless, there are several questions and critiques concerning the Brotherhood’s sudden call for judicial reform in Egypt.

First: If reform is a matter of principle, why the long wait before demanding it, and why the previous conciliatory and accommodating rhetoric about the judiciary, including judicial figures now deemed controversial?

Second: If there is a genuine desire for purging and reform, where are similar plans and calls for the even more problematic Interior Ministry?

Third: With the country at its most polarized, with political-based violence on the rise, and the struggling economy gasping for air, is it really the best time to single-handedly attempt to take on such a controversial issue, with its deep and lasting reverberations, giving credibility to accusations of trying to dominate the state by forcing the judiciary into submission? Would it not be better to first try to build a strong national consensus on reform?

Fourth: Should the Shura Council be the institution responsible for judicial reform? Should such an effort be the responsibility of the forthcoming House of Representatives given that the Shura Council is an advisory body, was elected by around 7% of the electorate, has a “temporary” legislative role only in the current absence of the lower house of parliament, and is supposed to focus on urgently needed consensus legislation?

Sixth: The reasons for the more benign verdicts in a plethora of revolution-related cases were said to be the result of flawed and insufficient investigation, evidence collection and prosecution (whether intentional or otherwise) with blame from the judicial performance side often countered with fears of the consequences of politicized verdicts. With the president having installed his preferred prosecutor general, in office for months, why does little seem to have changed in this regard?

Seventh: A little more than two years after the revolution, amid deep national distrust and polarization, is it wise for the Brotherhood to float the idea of transitional justice and so-called revolutionary trials in some cases outside the traditional court system? With the Morsi administration growing increasingly unpopular, would such a move be widely viewed as an attempt to bring the state further under its control and remove any political threats?

Eighth: Egypt’s judicial system is already incredibly slow, inefficient, and understaffed. Cases can take months or years to adjudicate. The Brotherhood’s recent moves raise the question of how the system could manage to function after the dismissal of hundreds or thousands of judges. In addition, they raise the question of how these judges are to be replaced and by whom, with some accusing the Brotherhood of orchestrating these judicial cuts to bring more of its supporters and sympathizers into the system instead.

The increasing politicization of Egypt’s judiciary — whether through continued political involvement of the Judges’ Association or the growing number of high-profile political cases being sent its way (e.g., parliamentary dissolution) — does not help Egypt or the cause of justice. The Brotherhood will only further polarize the country, and turn everyone (including former allies) against if, it attempts to unilaterally reform the judiciary, even if, theoretically, well intentioned.

Any controversial moves by the judiciary will further erode confidence in the legal system and the economy at an inopportune time. Reforming Egypt’s judiciary should only take place after true national reconciliation and a proper national dialogue on the subject and consensus on the way forward. It is unlikely the country’s political leadership does not know this.