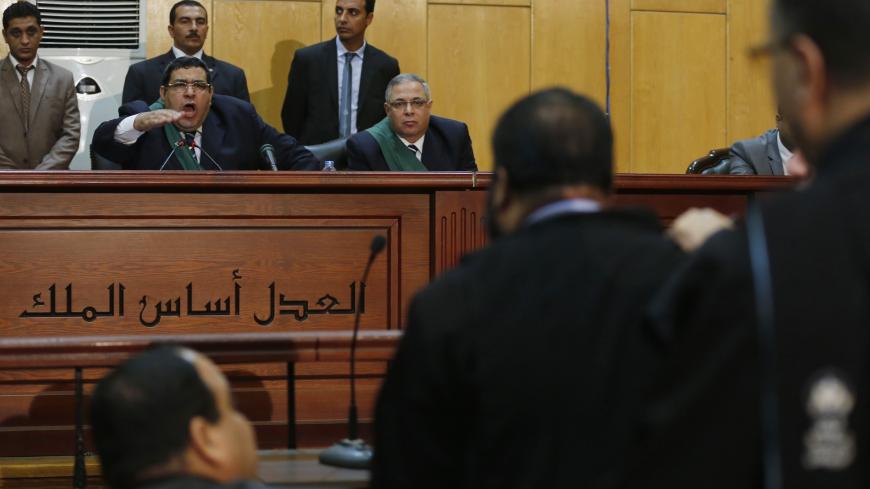 On Dec. 4, three presidential decisions were issued, requiring judges known for supporting the Muslim Brotherhood to retire. It was also decided to carry on with the investigations of the Judges for Egypt movement, accused of unlawfully interfering in political affairs, mainly in the results of the 2012 presidential elections, where candidate Mohammed Morsi won by 13,238,000 votes to 12,351,000 votes for his opponent Mohammed Shafiq.

This is not to mention accusations of supporting the Muslim Brotherhood by signing the Rabia al-Adawiya declaration, on July 24, 2013, whereby they declared the constitutional legitimacy of former President Morsi and demanded that the constitution be implemented, calling for dialogue and the respect and protection of the right to peaceful demonstration as per the law, rejecting violence and preventing the bloodshed of all Egyptians.

Despite all this, the controversy shrouding the future of the judges, the sympathizers of the Muslim Brotherhood and those who were involved with the organization during its rule is still continuing.

Egyptian President Abdel Fattah al-Sisi issued three presidential orders, requiring nine judges to retire based on the final court rulings that were issued on Sept. 22, 2014, by the Supreme Judicial Council’s disciplinary board, dismissing the judges from their duties. Among the judges are former public prosecutor Talaat Abdullah and former President of the Cairo Court of Appeal Ahmed Yehya, in addition to seven judges from the Judges for Egypt movement. At the same time, the Competence and Disciplinary Council of the Cairo Court of Appeal decided to postpone the prosecution of 15 judges from the Judges for Egypt movement, until the session of Jan. 19 as part of the lawsuit filed against 56 judges to call on their dismissal. Therefore, the legal status of the judges is in question, while some of them consider these procedures to be illegal.

The first procedure taken against the Muslim Brotherhood-supporting judges, which came before the issuance of the recent presidential orders, was when the Supreme Judicial Council refused to allow Ahmed Suleiman, appointed minister of justice during the Morsi presidency, to return to the judiciary. Suleiman was also banned from traveling, and his plea to return to his judicial work has been postponed until March 16.

Suleiman told Al-Monitor he was surprised that rules had been applied retroactively. He added, "I was also banned from traveling without being informed about the reason. In Egypt, no constitution or law is respected.”

He described the decision requiring judges to retire as a “massacre,” explaining that “it is not possible to refer these judges for retirement without the consent of higher authorities. These issues, in my opinion, affect Egypt’s reputation at the domestic and international levels.”

The right of judges to express a political opinion raises controversy among judges themselves, as some advocate for this right, including Suleiman himself. “Some judges were accused of supporting the constitutional declaration, issued by ousted President Morsi, although it was just an opinion that could be right or wrong,” he said.

Rifaat Said, former president of Cairo’s Criminal Court, told Al-Monitor, “According to the judiciary law, it is illegal for judges to be involved in any kind of political work, including supporting or sympathizing with political parties or religious groups.”

He explained that “a judge should be neutral and transparent, and in case he fell short of these two, he should leave his work or he will be legally dismissed.”

He strongly rejected describing these orders as a “massacre,” saying, “Those using the term ‘massacre’ are accused of not applying the law that prohibits involvement in politics.”

For his part, Suleiman said that the procedures against the Judges for Egypt were illegal, adding, “The assigned investigating judge, Mohammad Shireen, has a close relation with the head of the Egyptian Judges’ Club, Ahmad al-Zend. The latter asked Shireen to step down from this assignment, but he refused. The investigations resulted in referring 56 judges to the Competence and Disciplinary Council based on the false and fabricated investigations of the national security. This is why I filed a request to the general prosecutor on Dec. 15, 2014, to investigate the forgery committed by the national security officer against the Judges for Egypt.”

Regarding political work, Suleiman mentioned that the Judges’ Club opened its doors for the Tamarod movement to fill out the forms to oust Morsi, saying that these judges were not put under investigation.

Said responded to the claims that the investigations with the Judges for Egypt movement were illegal by saying that “such claims are considered as interference in the work of the judicial system and the investigation of the judge.”

Nisrine Badawi, a political science professor at the American University of Cairo, shed light on the correlation between the judicial system and politics. She told Al-Monitor, “Dismissing those opposing the ruling system is old news to the judicial institution. There is an agreement between the executive and judicial powers, to the extent that there is no need to pressure judges to work in line with the policies of the executive power.”

Badawi said that using the judicial system for the political settlement of accounts was an entrenched practice in the Egyptian political life. She believes that requiring Abdullah to retire is a decision with political motives, as was his assignment. In both cases, the Abdullah issue reflects how the ruling authorities deal with the judicial body, with no intention to restructure it, but rather eliminate the opposition present within this body.

When it comes to the judicial system, it is useless to talk about political considerations. The judges who announced the elections’ results under Morsi’s rule have without a doubt violated the judiciary law, as their step had nothing to do with the expression of political opinion. The controversy over signing the Rabia al-Adawiya declaration is, however, understandable. As the two revolutions of January 25, 2011, and June 30, 2013, called for a state of law, the judges themselves should be the first to abide by the law, or else the whole legal system would collapse. This does not only apply to the Muslim Brotherhood judges, but also to the current judges who have known political stances. These issues will remain controversial as they are related to problems plaguing the judicial system, such as the calls made to purge the judges and the role played by the Judges’ Club, which is stuck between the political and the professional sides.