Are Egypt’s courts carrying out their own revolution?

Some recent rulings could indicate Egyptian courts are trying to reclaim — or expand, some would say — the judiciary's influence. 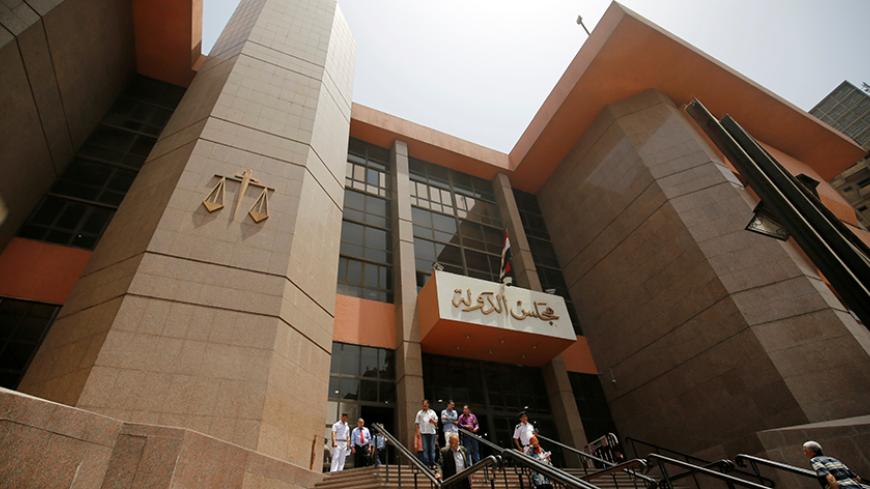 People walk by the entrance of the State Council's building, Egypt's highest administrative court in Cairo, May 17, 2016. - REUTERS/Amr Abdallah Dalsh

CAIRO — On June 21, an Egyptian administrative court issued several unexpected rulings that mostly oppose the general trend that has prevailed in the political administration of Abdel Fattah al-Sisi’s presidency. Chief among these was the quashing of the controversial maritime border demarcation agreement under which Egypt ceded the Red Sea islands of Tiran and Sanafir to Saudi Arabia.

The court also annulled the decision to freeze the funds of retired soccer star Mohamed Aboutrika — on charges of funding the Muslim Brotherhood — as well as those of Pakinam al-Sharqawi, who was the assistant to ousted former President Mohammed Morsi.

Observers of Egypt’s judicial affairs said the court's ruling on the maritime border agreement is tantamount to a revolution. International agreements concluded by the government or the president are considered outside the judiciary’s domain; the ruling sparked broad controversy related to the court’s competence in such matters.

Mohamed Basal, a researcher and head of the judicial section at Al-Shorouk newspaper, told Al-Monitor the court's recent rulings aim to expand "the powers and prerogatives of the State Council toward monitoring the work of the state.”

“I do not see that the ruling has any political dimensions,” he added.

The administrative court had issued rulings related to sovereign acts under previous administrations. Most notable was the decision to quash Morsi’s call for parliamentary elections in March 2013 and the November 2013 decision to give itself control over declaring and extending states of emergency during Adly Mansour's interim presidency.

“Expanding the prerogatives of the judiciary is a double-edged sword. It ensures a higher level of participation in and surveillance of political decisions and stimulates the ruling authority to exercise caution in its decisions, especially when it comes to raising the level of constitutional responsibility. However, it can prompt judges to practice a political power that goes beyond the constitutional jurisdiction as they examine issues that judges cannot fully address," Basal said.

He added, “The parliament is the only body that can politically and constitutionally control sovereign acts, but the parliament’s weak position and helplessness when it comes to implementing what the state or the political situation dictate are two factors that reinforced the trend of resorting to the judiciary rather than discussing such issues in political circles.”

The maritime ruling caused an ongoing state of legal and political controversy, although the government is challenging the ruling through the State Litigation Authority — the government lawyer. While many political activists and social networking website users deemed it a triumph for the judiciary’s independence, others were critical of the ruling because it is not within the court’s prerogative to examine acts related to sovereignty or to issue rulings regarding such acts.

Mohammad Hamid Gamal, former head of the State Council, told Al-Monitor, “The State Council courts shall refrain from deciding on issues related to sovereignty in accordance with the provisions of the constitution and the State Council law as these should only examine administrative disputes.”

Gamal said, “The court has mistaken a sovereign issue for an administrative one,” adding that the ruling quashing the agreement was wrong from the beginning. “The judiciary must be independent and away from the politicization of the courts.”

However, Gamal told Al-Monitor by phone, “The court relied on lawsuits and correct grounds while examining the case, and the judiciary did well by issuing its ruling independently from the state’s control.”

The set of rulings issued by the administrative court, which seemed to be confronting the political regime, was completely contrary to another set of rulings issued by criminal courts in apparent retaliation against political regime opponents. These rulings included collective death penalty sentences against 528 detainees in the Minya/Upper Egypt governorate, the prosecution of civil society organizations and expanding circles of suspicion so as to include whoever proves to be a member of the Muslim Brotherhood.

Politicized rulings were not the only dominant feature in some criminal cases, as other measures seemed like direct presidential interference in the work of the judiciary, including the dismissal of 48 judges from the Independence Party in March, the dismissal of Zakaria Abdul Aziz, former head of the Judges Club, and the dismissal of counselor Hisham Geneina, head of the Central Auditing Authority, even though the constitution stipulates that judges are independent and cannot be dismissed.

“There are independent judges in Egypt, but there is no independent judiciary,” former Minister of Justice Ahmed Suleiman told Al-Monitor. “The judiciary in Egypt revealed its bad side and disrespected the values ​​of justice in the criminal rulings. Some judges rely in their rulings on police records alone, while some of them confiscate the defendants’ right to stand before the court.”

Suleiman, who was forced to retire in May by the Court of Judicial Discipline, stressed that “judges are being intimidated so that no ruling is issued against the current regime’s whims.”

Amid the ongoing interference in the judiciary’s work, the continuing controversy and the lengthy litigation proceedings in Egypt’s criminal courts in pursuit of justice, the administrative court’s recent rulings (especially the maritime ruling) are restoring the confidence of many Egyptian movements in the judiciary.