Egypt’s parliament elected Hanafy Ali el-Gebaly as its new speaker, raising controversy as Gebaly chaired the Supreme Constitutional Court that validated an agreement under which Egypt agreed to transfer the strategic Tiran and Sanafir islands to Saudi Arabia. 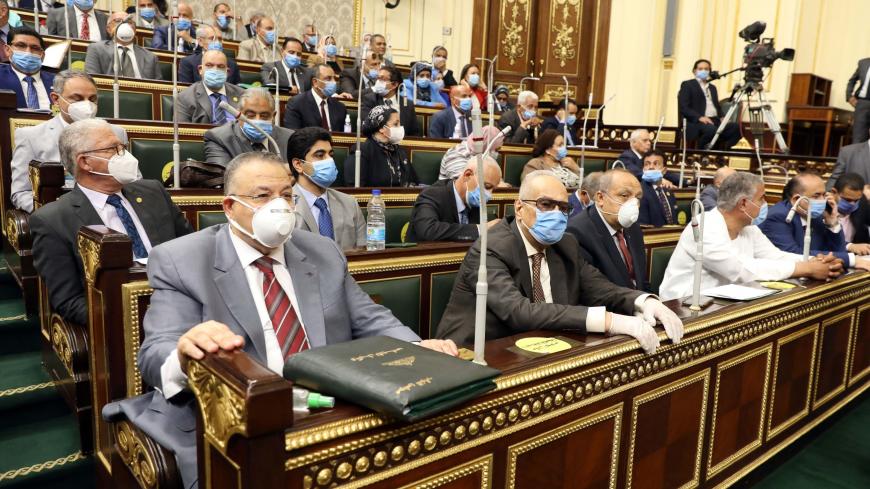 CAIRO — Judge Hanafy Ali el-Gebaly, who validated a controversial 2016 agreement handing two islands to Saudi Arabia, was elected speaker of the House of Representatives of the new Egyptian parliament Jan. 12.

Gebaly, the former head of the Supreme Constitutional Court, had won an independent seat in October's parliamentary elections. The Nation's Future Party, known for its support of President Abdel Fattah al-Sisi and which holds holds 55% of the seats in the parliament, provided Gebaly the backing he needed to assume the post.

This raised the ire of opposition politicians inside and outside Egypt because Gebaly was one of the judges who had approved a maritime border agreement between Egypt and Saudi Arabia under which Cairo agreed to cede the islands of Tiran and Sanafir to the kingdom.

In April 2016, Sisi signed an agreement to transfer ownership of Tiran and Sanafir. Despite a wave of objections and protests against the decision, the Egyptian government went ahead with it.

In January 2017, after months of court hearings, the High Administrative Court, the highest administrative authority in Egypt, ruled to nullify the agreement. The decision said the two islands were Egyptian.

But the government appealed the ruling to the Supreme Constitutional Court.

The Supreme Constitutional Court, headed by Gebaly, decided in March 2018 to void the High Administrative Court's ruling and to proceed with the Saudi-Egyptian maritime border agreement, ceding the two islands to Saudi Arabia. Gebaly said at the time that signing the agreement and ceding the two islands “was part of the state’s sovereign decisions. The judiciary does not have the authority to endorse or nullify the decision.” He said the High Administrative Court’s ruling undermined the executive authority represented by the president.

Adel Rashed, a member of the Muslim Brotherhood’s executive office who has been in self-exile in Turkey for more than six years, said Gebaly was elected speaker “to honor him for closing the judicial file regarding the Tiran and Sanafir islands, and to praise his shameful ruling of canceling any provisions related to the Egyptian ownership of the two islands and participating in ceding them to the kingdom.”

He told Al-Monitor through an online video communication service, “Sisi’s regime is sending a message to everyone that whoever is on his side and rules in his favor will be rewarded and put in the highest positions.”

Issam Hilal, secretary-general of the Nation’s Future Party and a member of the Senate, told Al-Monitor, “We decided to endorse Gebaly [for speaker] because of his rich judicial history.”

Hilal refused to answer the question about any link between supporting Gebaly and his ruling in favor of the agreement to cede control of Tiran and Sanafir. He said, “I don’t have an answer to allegations that endorsing him to be speaker of parliament was a reward for his ruling. The judiciary in Egypt is decent and independent and does not need rewards to do the right thing. Nobody can doubt the transparency of an Egyptian judge or court.”