Nadia Henry, a member of Egypt’s opposition 25-30 bloc in parliament, tells Al-Monitor that the opposition will continue to fight the transfer of Tiran and Sanafir islands to Saudi Arabia, and that a larger opposition coalition could be created. 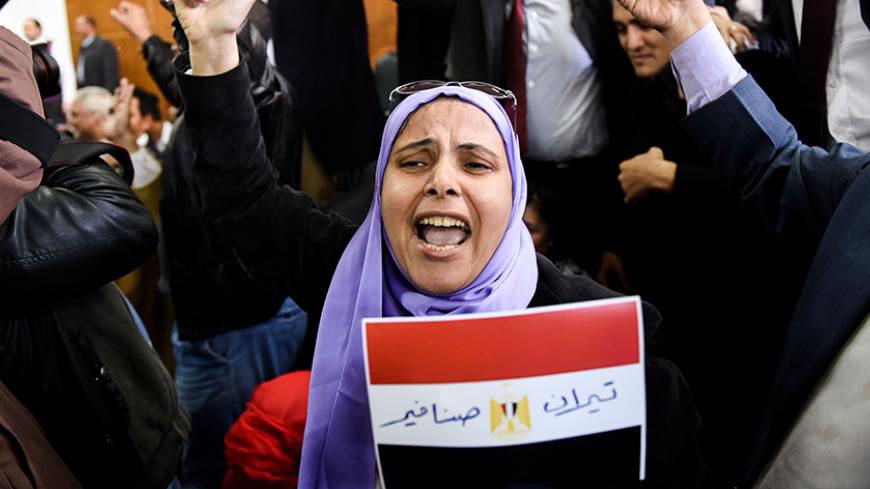 An Egyptian woman celebrates with a national flag defaced with the words "Tiran" and "Sanafir" after the High Administrative Court upheld a ruling voiding a government agreement to hand over the two Red Sea islands to Saudi Arabia, Cairo, Egypt, Jan. 16, 2017. - MOHAMED EL-SHAHED/AFP/Getty Images

Henry, who joined the leftist 25-30 bloc after resigning from the Free Egyptians Party in August 2016 over infighting within the party, says that instead of resigning, a larger opposition coalition will be formed and will include more than a hundred members of parliament.

The Coptic parliamentarian was among those Egyptians displaced from Ismailia to Cairo in the wake of the attrition war in 1969-70, during which Egypt defended its ownership of the Tiran and Sanafir islands. She says that Egyptian martyrs watered the soil of the islands with their blood.

Al-Monitor:  What’s next, after parliament approved the agreement to transfer ownership of Tiran and Sanafir islands to Saudi Arabia, despite the 25-30 bloc’s opposition? Your bloc demanded a roll call vote, whereby the speaker of parliament calls out the names of each parliamentarian to vote. Why was this request refused?

Henry:  We are waiting for the ruling of the Supreme Constitutional Court on July 30. The Court of Urgent Matters decided to hold the objection presented by several lawyers to the verdict of the Court of First Instance. The verdict does not take into account the nullification provisions of the Tiran and Sanafir agreement issued by the administrative judiciary and the Higher Administrative Court to rule in the July 30 session. I repeat that I am convinced that the islands belong to Egypt.

Al-Monitor:  You threatened to resign from parliament along with the 25-30 bloc to object to passing the agreement amid a lack of transparency. You also announced your decision to resign during the discussion session of the agreement. Although Al-Wafd Party member of parliament Mohamed Fouad already resigned June 15, you have not gone through with the resignation.

Henry:  Our bloc has a unified opinion and we decided to postpone the resignation and to wait and see the number of parliamentarians refusing the resignation and the possibility of forming a larger opposition bloc. This might happen soon. Everything is possible, but we are still pondering the matter. After discussions among us, we realized our resignation will no longer be useful.

To confirm our stance — which was not a mere media show — we [as the 25-30 bloc] sent President Abdel Fattah al-Sisi an official letter with the names of 120 members of parliament [out of about 400] refusing the agreement.

If the public believes the resignation will not lead to a revote on the agreement, then it is useless to go through with this step. We are not trying to evade our decision.

After the approval of the agreement, we had to abide by the majority’s stance resulting from a democratic process. But we will continue defending the islands belonging to Egypt.

Al-Monitor:  You were among the displaced from the Sinai Peninsula following the 1967 war. You have already mentioned this during the hearing and you cried during the agreement approval sessions. You wore black, especially as members of your family died defending the islands. Do you have special memories relating to these islands?

Henry:  Yes, I have special memories there. My family and I were displaced to Cairo after men from my family died defending the Egyptian ownership of Tiran and Sanafir. I heard stories in my entourage about Tiran and Sanafir and how Egyptians fought for them during the Tripartite Aggression on Egypt [in 1956 when Egypt fought against Britain, France and Israel over the Suez Canal] and during the war of attrition, which killed several of my family members.

I believe in the Egyptian character of the islands. The land has a strategic location on the Egyptian borders and before passing the agreement, we should have noted this strategic importance. Is this the right time to transfer the ownership of the islands to Saudi Arabia, given the regional conflicts? I know from my family about the wars and the Egyptian bloodshed, and I remember that Israel detained Egyptians on these islands. Egypt demanded Saudi Arabia save those detainees, but the kingdom did not lift a finger, according to a family member who was an eyewitness.

Al-Monitor:  Why do you think many parties in parliament approve of the agreement?

Henry:  Those who think the islands belong to Saudi Arabia did not offer enough evidence. We, on the other hand, gave enough proof of their Egyptian ownership. Nothing proves they are Saudi.

Al-Monitor:  Parliamentarian Ghada Ajami from the Support Egypt bloc has already accused you of receiving US funding to cause a buzz during the agreement discussion and your defending the Egyptian ownership of the islands. Will you take any legal measures against her?

Henry:  I took an immediate measure and lodged a complaint to parliamentary speaker Ali Abdel Aal including her offensive language about me. Ajami does not know who my family is and she should not make such accusations. She knows nothing about my patriotism. If she has any proof, she can be my guest. The parliament did not investigate the incident. I will have a legal stance outside parliament. Slander against the opposition is not acceptable.

She accused me of collaboration, but she does not know what I have done since Jan. 28, 2011. When I was in the Muslim Brotherhood’s parliament, I wore a scarf on which was written “Wanted: Mohammed Morsi.” I donated my full salary to the Tamarod movement to have flyers printed against the Brotherhood regime.

On June 26, 2013, I submitted my resignation from the Muslim Brotherhood's parliament openly during Tamarod’s conference, although my neck was on the line. That resignation — unlike this one — was timely.

Al-Monitor:  Do the members of your constituencies appreciate your stance, or do they want more?

Henry:  Our constituency members have different questions and we are answering all voters. I would like to ask about my performance in parliament rather than the result.

Some people in our constituencies refuse the agreement and were disappointed in us. They think we squandered their money and honor in preserving the Egyptian lands. We understand their feelings and we are always in touch to improve the situation.

Many members of my constituency want me to stay in my position and to keep trying to get my voice through in parliament. They believe the agreement tightened the bond between more than a hundred members of parliament, which is a positive thing that might lead to a larger opposition bloc.