Cairo erupts in protests over the proposed handover of two Egyptian Red Sea islands to Saudi Arabia as protesters question the Egyptian government's intentions behind the deal. 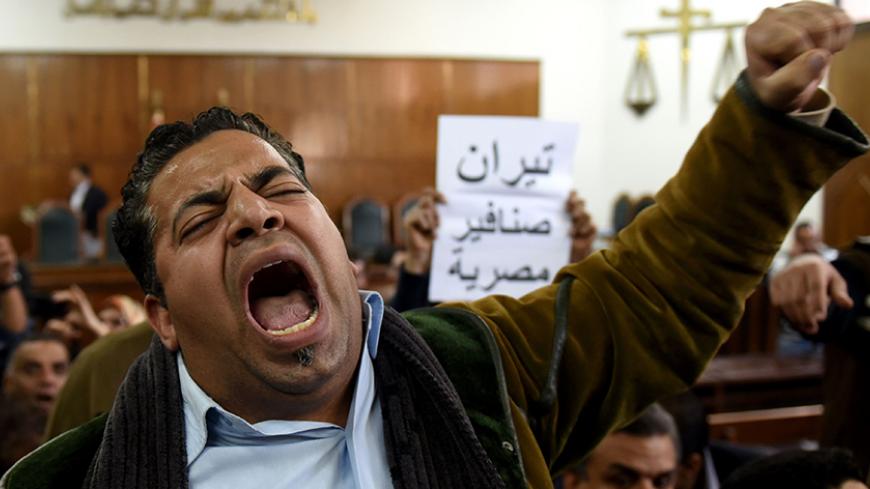 Egyptians react on Dec. 19, 2016, at the High Administrative Court as a judge announces the postponing of a court ruling in the case of two Red Sea islands, Cairo, Egypt, Dec. 19, 2016. - MOHAMED EL-SHAHED/AFP/Getty Images

A legal battle over a controversial Egyptian-Saudi maritime border demarcation agreement on two Red Sea islands threatens to spill over onto the streets, as protests condemning the deal erupt in Cairo and other major Egyptian cities.

Under the agreement signed on April 8, 2016, Egypt is to cede control of the two islands, Tiran and Sanafir, to Saudi Arabia. The government says the islands are in fact Saudi Arabian but have been in Egyptian custody since 1950. Many Egyptians are skeptical and believe the government is giving the islands to Saudi Arabia as gifts in gratitude for the generous aid the kingdom has pumped into Egypt since the 2013 ouster of Islamist President Mohammed Morsi.

On June 16, dozens of demonstrators marched through the streets of downtown Cairo in defiance of an anti-protest law in place since November 2013 to protest parliament’s approval of the transfer of sovereignty of the two islands.

“Bread, freedom, the islands are Egyptian!” chanted the protesters, in a modification of the iconic “bread, freedom and social justice” chant that was widespread during the 2011 revolution.

“Egypt is not for sale!” they shouted, beckoning residents watching from balconies to come down and join them.

What started as a small rally of around 20 marchers denouncing the deal quickly gained momentum, and within minutes, dozens more had joined the demonstration. Some scuffles broke out between the protesters and self-deemed “patriotic citizens" (regime loyalists) before security forces appeared at the scene. They quickly dispersed the protesters by firing shots in the air.

Meanwhile, there was a heavy police presence outside the Journalists Syndicate building, the scene of an angry protest by dozens of journalists three days earlier that ended with security forces arresting eight activists.

In Alexandria, police beefed up security at mosques in anticipation of a possible outbreak of violence after Friday noon prayers in the wake of calls for protests by activists who were outraged by parliament’s backing of the agreement. Eight activists were arrested after attempting to protest outside the Qaed Ibrahim Mosque, a gathering point for protesters during the 2011 uprising. More than 120 others were arrested across the country — 39 of them in Cairo — on the charge of “inciting protests,” according to lawyer and former presidential candidate Khaled Ali, who is leading the legal battle against the handover of the islands.

“Most of those taken into custody are activists and members of political parties who oppose the agreement,” he told Al-Monitor, adding that many of them were arrested outside their party offices or in police raids on their homes. He described the latest wave of arrests that has also targeted members of his own Bread and Freedom Party as “a vicious security campaign reminiscent of Nasser’s dawn raids” — in reference to the rounding up of dissenters in late night raids by former military ruler Gamal Abdel Nasser’s secret police, often without arrest warrants.

“All those arrested in Cairo for opposing the islands deal have been released on bail save for two who remain in police custody,” he said, adding that the activists arrested in provinces outside the capital are still detained.

Human rights lawyer Tarek Hussein — a member of both the liberal Al Dostour Party and the Freedom for the Brave campaign (a civil society organization working to advance the rights of detainees) who was arrested at his home in a dawn raid on June 17 — is among those still in police custody despite prosecutors at El Khanka police station ordering his release on bail for 2,000 Egyptian pounds (around $110) the day after his arrest. He has been charged with “inciting protests” and “having ties to a terrorist group.” Police told his defense lawyers that they had to make sure there are no other charges against Hussein before releasing him. Hussein had twice before been convicted — and later acquitted — in separate cases and, ironically, on widely conflicting charges of “belonging to a terrorist organization” (in reference to the outlawed Muslim Brotherhood) and attempting to overthrow Morsi, who hails from the Islamist group.

The latest controversy over the proposed handover of the islands was sparked by the majority pro-regime parliament’s overwhelming approval of the islands deal on June 14 despite a landmark ruling by Egypt’s High Administrative Court six months earlier rejecting the plan. In April, however, a Cairo Court for Urgent Matters reversed the January decision by Egypt’s top court to block the transfer of the islands, paving the way for parliamentary debate on the issue. Ali — who was infuriated by the April verdict, which he slammed as “illegitimate” and a "judicial cover" to allow the authorities to hastily give away the territory — has since appealed the ruling. On July 3, the Constitutional Court is expected to make a final decision on the motion he tabled. Ali, who had also filed and won a previous lawsuit against the government over the islands deal, is paying a heavy price for challenging the regime. He currently faces prosecution for “violating public morals” because of an obscene hand gesture he allegedly made while celebrating January’s High Administrative Court ruling blocking the islands deal. If convicted, he faces a one-year sentence or a fine and he would also be barred from running in the presidential race.

The contentious deal has meanwhile caused a rare split in parliament, with leftist lawmakers voicing their objections to it and one parliament member — Mohamed Fouad, representing the opposition Wafd Party — resigning in protest at “parliament’s unfair voting process on the agreement.” A picture of a female parliamentarian breaking up in tears after the parliamentary vote and a video of opposition parliamentarians chanting “Egyptian! Egyptian!” (in reference to the islands) were widely shared by activists on social media this past week. Parliament member Haitham Al-Hariri, a member of the 25-30 bloc (a leftist coalition), has threatened to resign if President Abdel Fattah al-Sisi ratifies the deal. “Our last hope for the deal to be scrapped is for the president to renege on his decision,” he told Al-Monitor, adding that “governments are replaceable, but sovereign territory is not.”

Hariri also criticized parliament Speaker Ali Abdel Aal for what he called the latter’s “pro-Saudi stance” and for “hurling baseless accusations at those opposing the deal.”

During parliament’s session on the islands deal, Abdel Aal had accused opposition figures of sowing dissent and trying to mislead the public by sharing fake maps on social media that show the two islands within Egypt’s borders. “The only maps that are valid are those from the armed forces,” he insisted. In comments in his column published on the pro-government Bawaba News website, Abdel Rahim Ali — a journalist and pro-government parliament member — meanwhile exhorted the public not to heed activists’ calls for protests, warning that protests would destabilize the country and that the anti-regime activists were carrying out “foreign agendas.”

Public opinion is split over the islands deal. A recent poll by the Egyptian Center for Public Opinion Research (Baseera) has revealed that nearly half of the population believes the islands belong to Egypt (a 17% increase over the number from an earlier poll conducted when the agreement was signed in April 2016). Meanwhile, only 11% believe the islands belong to Saudi Arabia, and the rest are unsure. The survey was conducted over the phone on a sample of more than 1,000 citizens aged 18 and above from the different governorates, according to Baseera.

While the deal is likely to go through despite the rare show of defiance and fierce opposition to it by some Egyptians, one thing is certain: It has further polarized Egyptian society and has shown that popular unrest has not been completely wiped out despite the ongoing harsh security crackdown on dissent. The agreement has also resulted in a further dip in Sisi’s popularity, already declining due to recently introduced harsh austerity measures and high inflation.