Online calls for anti-Sisi protests in Egypt may fall flat 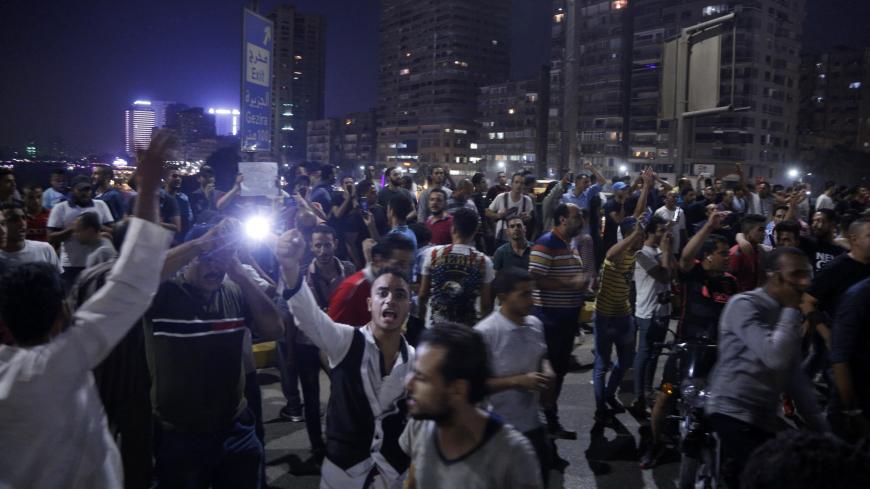 Egyptian protesters shout slogans as they take part in a protest calling for the removal of President Abdel Fattah al-Sisi in Cairo's downtown on Sept. 20, 2019. Protesters also gathered in other Egyptian cities but police quickly dispersed them. In Cairo dozens of people joined night-time demonstrations around Tahrir Square — the epicenter of the 2011 revolution that toppled the country's longtime autocratic leader. - AFP via Getty Images

A correspondent in Egypt
September 7, 2020

The Arabic hashtag #We Don't Want You has topped Egyptian Twitter's trending list in recent days. Launched by opposition activists Aug. 29 in response to President Abdel Fattah al-Sisi's call for a referendum on whether he should remain in power or step down, the online anti-Sisi campaign reflects rumblings of discontent that, if left unaddressed, could evolve into an uprising against the Egyptian leader.

The military strongman, who has twice won presidential elections (in 2014 and 2018) with no real opposition, has seen his popularity decline due to repressive tactics, harsh austerity measures and a prolonged anti-terror campaign in the Sinai that has yet to bear fruit. This is a far cry from the early days of his rule when Sisi was seen by his supporters as the country's savior from Muslim Brotherhood rule and the country was swept by Sisi-mania, with his image seemingly everywhere: on posters, T-shirts, cologne, chocolates and even underwear.

That changed in April 2016 when Sisi signed a controversial maritime agreement ceding sovereignty over two strategically located Red Sea islands, Tiran and Sanafir, to Saudi Arabia, a move that sparked rare protests in Egypt (despite mass public gatherings being outlawed under a November 2013 anti-protest law).

While the government claims the islands belong to Saudi Arabia, opposition activists accuse Sisi of giving away Egyptian land to please Saudi Arabia, which backed Egypt financially after the 2013 overthrow of President Mohammed Morsi.

Anti-government protests erupted again on Sept. 20, 2019, after Egyptian businessman and actor Mohamed Ali (who lives in exile in Spain) published a series of videos online, accusing Sisi of wasting millions of dollars on presidential palaces while millions of Egyptians live in poverty.  Last year's protests, which were quickly dispersed by riot police using tear gas,  marked the first time that demonstrators had called on Sisi to resign. The arrests of hundreds of opposition activists in the wake of the unrest further fueled the anger, prompting even wider discontent.

In fiery statements broadcast live from Alexandria during the inauguration of a motorway Aug. 29, a visibly angry Sisi threatened to deploy the army "in every village" to stop the illegal construction of residential buildings on agricultural land, which he equated with terrorism. He also described the "destructive" and "rapid" urban encroachment on farmland as a threat which he said it "is no less dangerous than Ethiopia's [Grand Renaissance] Dam."  Cairo fears that the completion and filling of the dam will cut into Egypt's water supply.

"I have enough engineering machinery to obliterate and remove (illegal buildings) and if people don't like that, then they can have a referendum (on my leadership) and I just leave," Sisi said.

He added, "I am tortured and pained every day when I see my country being decimated and its own people are destroying it. We are this country's worst enemies."

Sisi's lamentations sparked an angry outburst on social media, with thousands of activists calling on him to leave and citing a range of reasons for wanting him to step down. Some called for "freedom" for Egypt and for a revolution on Sept. 20 (the date marking the anti-Sisi protests that erupted last year) "to salvage Egypt from destruction."

The space for freedom of expression has considerably shrunk under Sisi's rule with the government blocking hundreds of news sites and state entities consolidating their control over media outlets. Journalists also face a variety of threats, including arrests, intimidation and harassment. The government has also launched an unprecedented crackdown on civil society with systematic targeting of rights defenders, lawyers, artists and members of the LGBT community.

Bahey El Din Hassan, an exiled rights defender and director of the Cairo Institute for Human Rights Studies, is the latest to pay a price for his activism. On Aug. 25, he was sentenced in absentia by the Fifth Terrorism Circuit Court in Cairo to 15 years in prison over a tweet critical of Sisi in what Amnesty International described as an "'outrageous verdict" based on "fabricated" charges of insulting the judiciary and disseminating false news.

Many activists also shared images of homeless citizens sitting amid the rubble after their houses had been demolished under orders from the military prosecution. The demolitions are part of an ongoing government crackdown on illegal construction across the country that between late March and early July saw more than 36,000 unlicensed or illegal structures razed.

Many more such buildings are expected to be bulldozed in the coming months as the government continues its zero-tolerance policy vis a vis building violations. Illegal buildings mushroomed during the period of political turmoil that followed the 2011 uprising, with citizens taking advantage of the lax security to build housing units without seeking permits. The government has given violators until the end of September to seek reconciliation with the state and legalize the status of their property or risk being subject to prosecution and having their unauthorized buildings pulled down.

The calls for protests have grown louder in recent days with the hashtag "Go down Sept. 20" replacing "We Don’t Want You" as among the top trending on Egyptian Twitter.

Activists urged Egyptians to break their fear and take to the streets to call on Sisi to step down, insisting, "We can do it."

Hassan Nafaa, a professor of political science at Cairo University, dismissed the calls as "not serious." Nafaa was among hundreds arrested in the sweeping campaign of arrests that followed the Sept. 20, 2019, protests; he was charged with "spreading false news" and "joining a banned group," in reference to the outlawed Muslim Brotherhood; these accusations were reported to have been related to a September 2019 tweet criticizing Sisi.

Nafaa was released in March 2020 along with several other politicians detained on similar charges.  He told Al-Monitor, "Such calls are hollow and will not gain momentum as there are no political forces backing them. There is apathy on the streets, political parties have been weakened and rendered ineffective and political life is all but dead in Egypt. The current anti-Sisi campaign is toothless and leaderless. Most of those calling for regime change reside outside the country as activists living in Egypt dare not make such calls for fear of arrest. "

Drawing a comparison between the current online calls for Sisi to resign and the calls that preceded the Jan. 25, 2011, uprising that forced Mubarak to step down, Nafaa said, "While the Revolution of 2011 was also without leaders, there were several political movements such as Kefaya and We Are All Khaled Said mobilizing the public for the mass anti-government protests."

He continued, "the current calls are associated with exiled businessman Mohamed Ali (an insider who has worked closely with the current regime) but he only served to expose corruption within the regime; it was a mistake for him to call on Egyptians to take to the streets, as many, including myself, were harmed by his irresponsible calls."

Political analyst Hisham Kassem agrees that the calls for protests on social media will not culminate in a mass uprising. "They may grow louder and gain momentum in the coming days and weeks but can only fizzle out in the end. Those calling for protests are unknown to the public and it is highly unlikely that anyone will heed their calls," he told Al-Monitor.

He added, "But that is not to say that people are not disgruntled with Sisi's rule; they are, and the online calls for protests are the only means for them to express and vent their grievances. The situation is volatile and any random incident like a young man committing suicide by throwing himself under the wheels of a train can cause an eruption but the online calls will fail to mobilize the public."

Kamal Amer, head of parliament's Security Committee, meanwhile rebuffed the calls for protests, lashing out at those behind them. "Those so-called 'activists' are full of envy at the great achievements in the country under Sisi and are spreading malicious lies in an attempt to stir chaos and unrest. Their efforts will not succeed as Egyptian patriots wholeheartedly back their leader and are proud of his efforts to build a modern country and safeguard stability," he told Al-Monitor.

The "patriots" (a word generally used to refer to Sisi supporters). meanwhile, responded by launching their own hashtag, "We Won't Take To The Streets Sept. 20" (which has also gone viral) to counter the one calling for protests. Supporters expressed their solidarity and support for Sisi while lambasting the dissenters, painting them as "traitors."

"If you are so enamored with [Qatari emir] Tamim and [Turkish President Recep] Erdogan, then go to Qatar or Turkey. We love Egypt and President Sisi," one supporter tweeted, citing the two countries that are currently at odds with Egypt and which are often accused by the state-loyalist media  of fomenting unrest in the country.

While the trending hashtags are indeed unlikely to lead to a revolt or even small protests, they are a manifestation of the deep grievances harbored by many Egyptians under Sisi's iron-fisted rule. They mirror a sense of hopelessness and deepening polarization in a society where fear and apathy, symptomatic of President Hosni Mubarak's long rule, have returned with a vengeance.