How Egyptian protesters are saying it with music

Songs with catchy rhythms and street language have become the anthems of Egypt's young protesters. 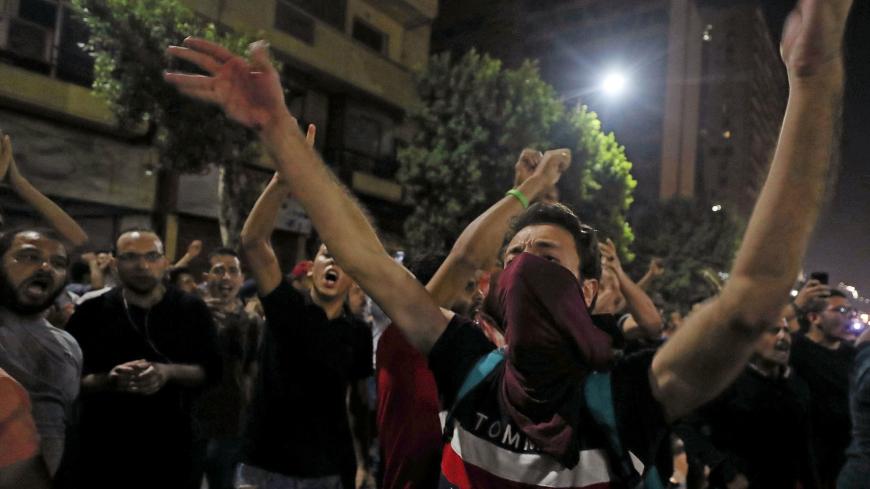 Islam Hassan, a 17-year-old Egyptian student, has had the song “Mesh Benkhaf” (“We Have No Fear”) on repeat ever since Sept. 24, when the track was first posted on "Mohamed Ali Secrets," a popular Facebook page urging Egyptians to rise up against President Abdel Fattah al-Sisi.

“Mesh Benkhaf,” with its catchy rhythm, has become, along with other songs, a battle cry for the protesters who have taken to the streets against Sisi. Hassan, who lives in Minya, had planned to join the protests Sept. 27, but, in the end, he stayed home. In an act of online rebellion, he posts and reposts the song, reciting the lyrics to himself over and over.

Mohamed Ali, an Egyptian businessman based in Spain, started posting anti-Sisi videos on Facebook Sept. 2. His page went viral almost immediately. Today, it has 1.2 million followers. Some of the videos resemble news broadcasts, revealing corruption scandals involving Sisi and military leaders. Other videos are satirical songs that call on Egyptians, particularly those hit hardest by the high cost of living, to take to the streets, first on Sept. 20, then Sept. 27.

Some of the most popular songs on social media are “Stannani, Ya Sisi”(“Wait for me, Sisi”); "Mohamed Ya Ali, Ihna Shaeb Riggala" (“We Are a Strong People”); and "Anadik Bi Eh?" ("What Should I Call You?”). Most of the songs' lyrics are inflammatory, if not downright insulting, toward Sisi and his regime.

Other pages have reposted the videos and used the songs as background music for their own videos. For instance, Wael Ghonim, an activist who became an international figure during the January 25 Revolution, posted a video of himself dancing to these songs on Facebook Sept. 20.

Politically charged songs are not new to Egypt. Before the January 25 Revolution in 2011, a whole repertoire of protests songs had emerged in Cairo's slums before making their way to Alexandria. Most of the songs mixed techno music with a fast-paced rap, attracting millions of views online. Some of these songs outlived the revolution itself, and can still be heard at weddings, parties or at the performances of techno singers such as El Madfaagya.

“Such songs have become popular in Egypt thanks to their simple, street-like language … and their clever use of social media to reach the public,” Fayrouz Karawya, a singer and music researcher, told Al-Monitor.

Karawya said that these songs tackle issues that are important to youths: drugs and peer relationships, quarrels, the use of force and politics. They also use youthful jargon, with slang and swear words thrown in, which is not common in other genres. Given their content and language, the songs are popular at underground festivals and political rallies.

Unsurprisingly, the government has canceled, on several occasions, the concerts of these underground groups and techno singers. A year ago, the Egyptian government passed regulations to tighten government control over festivals. The underground groups, meanwhile, have turned to social media — or their own YouTube channels — to get their voices heard.

Once these groups get on social media, it is difficult for the government to keep track of or control what they produce or distribute, said Karawya. Most of the songs are not recorded in a studio — the clips are simply shot with mobile phones.

The Sisi government is aware that music is an effective way to reach the people, in particular young people. The government produced a song, “Hom Ayzinha Fawda” (“They Want Nothing but Chaos”), performed by actor and singer Mohamed Ramadan. State television and pro-government channels repeatedly broadcast the song during commercial breaks. Ramadan and other performers even performed the song live during a demonstration in support of Sisi at Rabia al-Adawiya Square Sept. 27.

Yet the song has not increased Ramadan's popularity. He closed comments on his YouTube channel after receiving so much criticism.

Hassan described the song as an attempt by the regime to portray Sisi as a hero of the poor, and to claim that chaos would reign if Sisi was ousted.

“The song is disappointing, but that is what you’d expect from an actor and singer who benefits from Sisi remaining in power,” Hassan said, observing that Ramadan has acted in many pro-government television series that aim to improve the image of the police and army, such as “Nesr El Saied” (“Eagle of Upper Egypt”) and the film “Herras El Watan” (“Guardians of the Homeland”).