Is new revolution in the making in Egypt?

Egyptians protested for the second week in a row against President Abdel Fattah al-Sisi and government corruption, as authorities widened their crackdown. 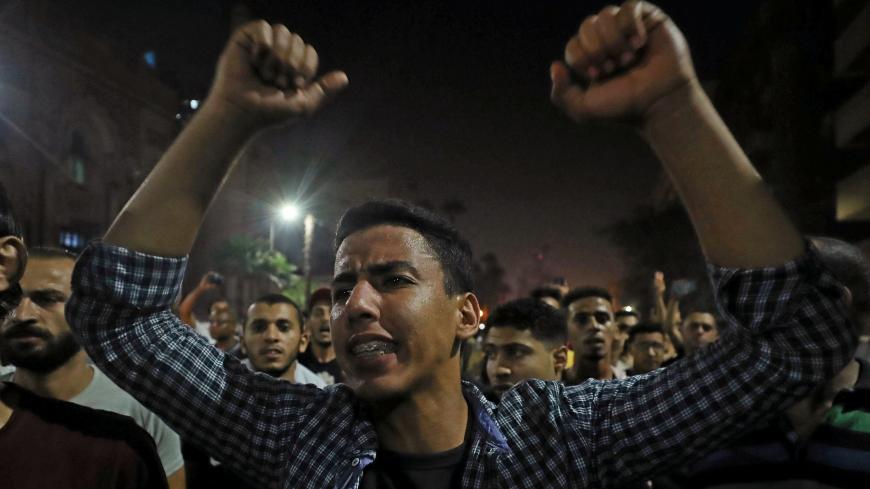 For the second week in a row, demonstrations against Egyptian President Abdel Fattah al-Sisi were held in the cities of Qena, Luxor, Sohag and al-Warkh near Giza governorate.

On Sept. 27, demonstrators defied tight security measures imposed in various provinces and chanted slogans calling for Sisi’s departure. Others protested the deplorable situation in the country, calling for the overthrow of the regime. The police dispersed the demonstrators using tear gas.

Meanwhile, hundreds of Sisi supporters from several governorates rallied the same day in Nasr City near Rabaa al-Adawiya Square, east of Cairo, where a series of performances were given by artists Mohamed Fouad, Mohamed Ramadan and Mahmoud al-Laithi. A number of celebrities, public figures and members of parliament attended the rally, as security forces allowed the limited demonstration to take place immediately after Friday prayers.

Officials in several government agencies said they had been instructed to be at their workplaces Sept. 27 and wait for buses to take them to a pro-Sisi rally. They were also told they would be compensated for a day off, with lunch and drinks provided.

Sisi arrived in Cairo Sept. 27 after a five-day trip to participate in the UN General Assembly meetings in New York. In front of the airport gate for presidential and VIP trips, located in an area normally closed to civilians, hundreds of citizens gathered with banners in support of the Egyptian president.

On Sept. 20, Egyptians took to the streets in response to online calls for demonstrations as Sisi headed to New York.

Mohamed Ali, an Egyptian businessman and former military contractor residing in Spain, published a number of videos calling for Egyptians to overthrow Sisi. Ali accusing Sisi and those close to him in the military establishment of “corruption and waste of public funds.”

Egyptians first gathered Sept. 20 in Tahrir Square and around central Cairo and several other cities, such as Alexandria, Suez, Damietta, and Port Said late Sept. 20. They demanded that Sisi be “excluded” from power and chanted slogans against the Egyptian authority.

Demonstrations in the northeastern province of Suez continued until Sept. 24. Meanwhile, pro-government rallies were also held.

Sisi was elected president in 2014, with 97% of the vote. He was reelected for a second term in 2018. Egyptians also voted in favor of constitutional amendments in April that could allow Sisi to remain in power until 2030.

Protests in Egypt have become rare following a massive crackdown against opposition supporters under Sisi, who took power after former Muslim Brotherhood member President Mohammed Morsi was ousted in 2013.

Demonstrations in Egypt are restricted under Law No. 107 of 2013, while a state of emergency has been in effect since 2017.

The law requires organizers of demonstrations to notify authorities at least three working days ahead of the protest, and the Interior Ministry may forbid the protest if it poses a “security threat.” The law provides for a gradual use of force, including verbal warnings, rubber bullets, water cannons, batons and tear gas.

According to reports received by the Egyptian Center for Economic and Social Rights, a nongovernmental organization, 2,076 people were arrested between Sept. 20 and 27.

In response to the protests, Sisi said that public opinion in Egypt would not accept the rule of “political Islam.” During a meeting with President Donald Trump on the sidelines of the UN General Assembly in New York, Sisi responded to a journalist’s question about the protests by saying, “Numerous efforts have been made over the years to allow political Islam to play a role in the region.”

Sisi added that “instability will remain in the region as long as political Islam seeks to reach power in our country.”

After his return from the United States, Sisi posted on his Facebook page that the battle with terrorism is not over. He called on Egyptians to focus on eliminating terrorism, stressing that the “cancer of terrorism” is still trying to kidnap this country.

“We are fighting it with all our strength and faith and we will be victorious, God willing, thanks to Egypt's strong army, which … continues to thwart off malicious ideologies,” Sisi’s post read.

Nafaa was arrested one day after he tweeted, “I hope you understand my words properly; I have no doubt that if Sisi remains in power, it will definitely lead to disaster. It would be for Egypt’s best interest if he were to step down right this second, but he will not without popular pressure. At the same time, we must choose the least expensive way to ensure that power is transferred to safe hands, and to avoid chaos.”

Michael Page, deputy Middle East and North Africa director at Human Rights Watch, said in a report, “President al-Sisi’s security agencies have time and again used brutal force to crush peaceful protests. The authorities should recognize that the world is watching and take all necessary steps to avoid a repetition of past atrocities.”

Najia Bounaim, Amnesty International's North Africa campaign manager, said in a report on Amnesty’s website, “These protests came as a shock because the authorities thought they had permanently intimidated protesters through the heavy-handed tactics of the past six years including arbitrary arrests and the use of excessive force, including lethal force. … Instead of escalating this repressive backlash, the Egyptian authorities must immediately release all those detained … and allow further protests on Friday [Sept. 27] to go ahead.”

NetBlocks, an organization that monitors cybersecurity and internet shutdowns, said that Egypt's top internet service providers have started to restrict access to Arabic versions of international media, such as the BBC and the US-funded al-Hurra, and to interrupt social media platforms.

Mohammed Abdul Salam, director of the research unit at the Association for Freedom of Thought and Expression, told Al-Monitor, “After videos of the protests went viral and al-Hurra, BBC and Reuters covered them, the government took action. First, the State Information Service issued a statement addressing foreign journalists to intimidate and indirectly threaten them, saying that they should avoid exaggerating the situation and copying information from social media. In addition, the government blocked some sites to prevent access to impartial sources of information.”

Egyptian political analyst and professor of political science at Cairo University, Mustafa al-Sayyed, told Al-Monitor, “What happened on Sept. 20 is a sign, and it must be of concern to the ruling authorities. The protests show that fear and despair are fading away, and the people took to the streets to protest, despite the intense security measures. The first thing demonstrators demanded was for Sisi to leave.”

Sayyed added, “I do not believe such protests would stop there, but it is hard to predict what could come next.”