Cairo clamps down on dissent as Egypt sees rare unrest 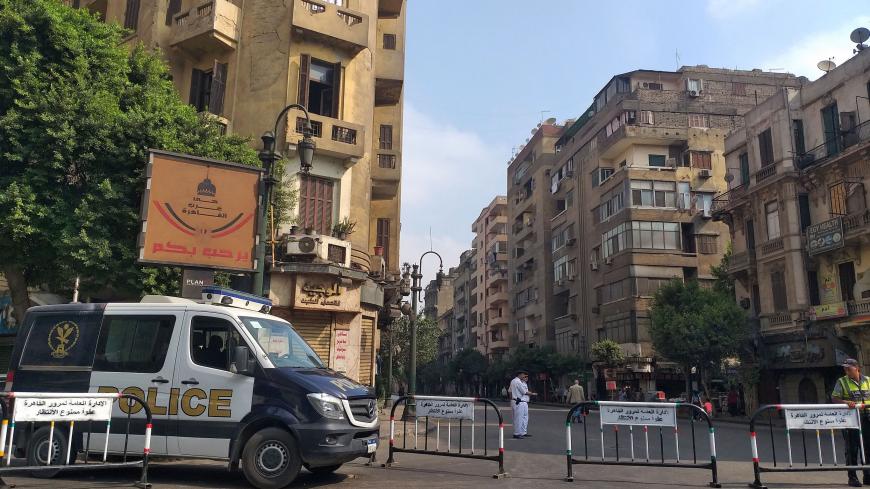 Egyptian security forces block the road leading to Cairo's Tahrir Square on Sept. 27, 2019, as Egypt braced for a second weekend of protests, as anger stemming from economic hardship and alleged top-level corruption threatened to eclipse a longstanding ban on street rallies despite an intensifying crackdown. - KHALED DESOUKI/AFP/Getty Images

The tensions were palpable last week as Cairo braced itself for a new wave of anti-government protests Sept. 27 spurred by online calls by exiled Egyptian construction contractor Mohamed Ali and other opposition activists for a "million man march" reminiscent of the 2011 uprising. But the mass gathering failed to materialize, thanks in part to a harsh security crackdown on dissent that in recent days has included a sweeping campaign of arrests, the biggest in the country since Abdel Fattah al-Sisi formally came to power as president in June 2014.

Instead, thousands of flag-waving Egyptians gathered in Cairo's eastern neighborhood of Nasr City at mid-afternoon on the day of the planned protests for a state-backed rally, expressing support for Sisi. State employees and other "supporters" from various provinces, the majority of them simple farmers and workers, "were pressured into attending and were ferried by buses to the site of the rally," a witness who published her account on Arabic Post said. Members of parliament were among those who mobilized for the large gathering, enticing people to attend with "food packages" and "monetary bribes," she claimed.

While fear of arrest has been a prime factor preventing many from joining the protests, it is by no means the sole reason why many Egyptians have opted to stay away from the demonstrations. The majority of Egyptians are weary after years of political and economic turmoil; many fear that protests could undermine Egypt's stability. Egypt's pro-government media have capitalized on those fears, accusing "foreign entities" and "the terrorist Muslim Brotherhood" of fomenting unrest. The media have also pointed the finger at "foreign agents" and "traitors" inside the country, accusing them of helping the "evil Muslim Brotherhood" carry out its agenda of "destroying Egypt."

Talk show hosts have alleged that fake accounts on social media sites are behind the anti-Sisi hashtags that have trended online in recent days, including #Sisi_Leave and #Enough_Sisi.

The streets in downtown Cairo were deserted Sept. 27, save for a heavy security presence in the vicinity of Tahrir Square, the center of the Jan. 25, 2011, uprising that toppled former dictator Hosni Mubarak. It appears the government is taking no chances after hundreds of anti-government protesters took to the streets in Cairo, Alexandria, Suez and other cities on Sept. 20 and 21 to demand "Sisi's removal." Thousands of police were deployed in Cairo's streets, and security forces blocked access to Tahrir Square with barricades and checkpoints. Pedestrians were randomly stopped and searched by police in the streets; some also had their IDs and cellphones checked, presumably for clues about their political views. Several Central Cairo metro stations were also closed as part of the security clampdown.

On the eve of the anticipated protests, the Interior Ministry released a statement threatening it would use force to quash any further demonstrations. Sisi, meanwhile, downplayed the call for demonstrations. Upon returning to Cairo from New York where he attended UN General Assembly meetings, he sought to reassure a crowd to supporters, gathered to greet him at Cairo Airport.

"Why are you worried?" he asked. "What happened before will not be repeated," he said, in clear reference to the mass protests that unseated Mubarak. "Egyptians have a tendency to distort truths and spread rumors," he added, a hint that some media outlets had exaggerated in their reporting on the recent protests.

The BBC Arabic website and other news sites were temporarily blocked in Egypt after reporting on the latest wave of unrest. Makram Mohamed Ahmed, the head of the Supreme Media Council, the authority responsible for regulating the media, cited "inaccurate coverage" as the reason behind the websites' blockage. The State Information Service, meanwhile, sent a statement to foreign journalists working in the country, warning them against spreading false information

While the tight security measures succeeded in thwarting protests in the heavily fortified downtown area, several demonstrations did take place Sept. 27 in Cairo's working class districts of El Warraq and Helwan, as well as in Qus, a city in the impoverished southern governorate of Qena. Mohamed Lotfy, a human rights defender and the Cairo-based executive director of the Egyptian Commission for Rights and Freedoms, believes that rising poverty and dire economic conditions resulting from the government's recent austerity measures — and the ongoing repression — are the main driving force behind the recent unrest.

"It is noticeable that most of the protesters are not from the political groups that were part of the movements for change on Jan. 25, 2011, or June 30, 2013," Lotfy told Al-Monitor, in reference to the street protests that unseated two presidents in Egypt. "This time, the mobilization for protests is not by political parties or youth groups. The protests express a general anger among average or non-politicized Egyptians. There has been a six-year buildup for this moment. The popularity of the president has been steadily on the decline as a result of the economic austerity measures, combined with the shrinking space for peaceful expression."

The recent protests — a rare show of defiance in light of the Egyptian government's heavy-handed policies and an ongoing crackdown on dissent — were met with excessive force by security forces. Tear gas, rubber bullets and live ammunition were used to disperse the Sept. 20 demonstrations triggered by a series of viral online videos posted by Ali on YouTube and Twitter, accusing Sisi and high-ranking officers of corruption. Ali also claimed the military owes him millions of Egyptian pounds for lavish palaces he built for Sisi. This comes at a time when more than 30% of Egyptians live below the poverty line, according to the official statistics agency.

Fearing that Ali's mobilizing calls for mass street protests would cause further unrest, the authorities have stopped at nothing to stifle dissent. Within the span of the last 10 days alone, more than 2,000 people have been arrested, most of them rounded up at or near protest sites. Several liberal thinkers and opposition activists, not directly involved in the protests, have also been arrested in recent days. They include two Cairo University professors of politics who are both outspoken government critics. On Sept. 24, a day before his arrest, professor Hassan Nafaa tweeted, "I have no doubt that the continuation of Sisi's absolute rule will lead to disaster. It is in Egypt's interest that he leaves today rather than tomorrow. But he will only leave with public pressure from the street. It is up to us to choose the less costly course to ensure a smooth transition of power and avoid chaos."

Khaled Dawoud, who is a journalist and the former head of the liberal Al Dostour Party, has also been arrested and ordered detained for 15 days pending investigations. He and Nafaa face charges of "aiding a terrorist group" and "misusing social media to spread fake news." On Sept. 28, Alaa Abdel Fattah, a prominent dissident who had been spending the night at a police station as part of his five-year probation following his release in March, failed to reappear the following morning. He later resurfaced at the State Security Prosecution and family members said both he and his lawyer Mohamed El Baqer had been detained.

The wide-scale arrests, reminiscent of the sweeping detentions of Muslim Brotherhood leaders and followers in the months that followed the overthrow of Muslim Brotherhood President Mohammed Morsi in mid-2013, have sent a chilling message to government critics and opposition activists that they could be next in line. "The severe crackdown can only be effective in stifling protests in the short term," said Lotfy. He speculates that the recent protests may just be the start of wider unrest to come.