In the wake of protests, the Egyptian government OKs some small price reductions and may allow a little greater press freedom. 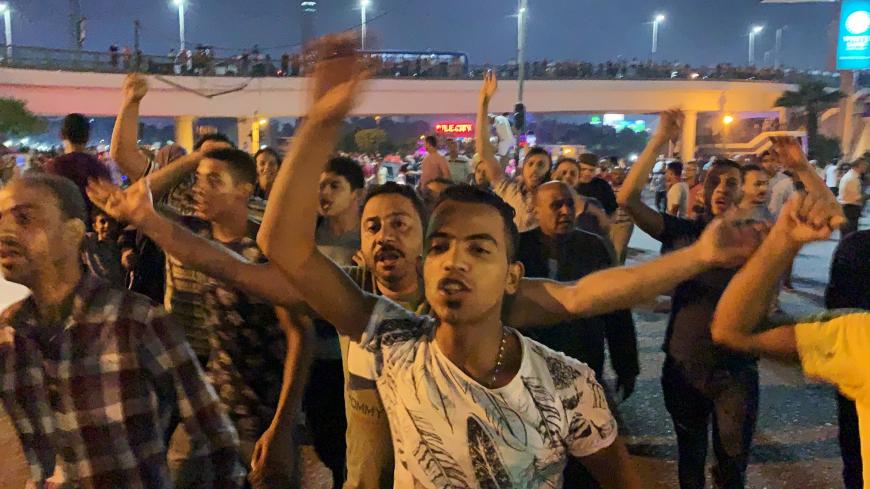 A correspondent in Egypt
October 6, 2019

Egyptian state officials, members of parliament and the country's pro-government media are fervently working to contain the anger on the streets and prevent a recent wave of dissent from escalating into a full-blown political crisis.

In attempts to appease disgruntled Egyptians who took to the streets on two consecutive Fridays last month to demand the resignation of President Abdel Fattah al-Sisi, the authorities have promised a set of policy changes, including reductions in prices of basic commodities and an easing of restrictions on the media .

"The coming period will see political, media and party reforms. The people have shown that they are united behind the country's political leadership and the authorities will reward them handsomely [for their support]," parliament Speaker Ali Abdel Aal said in an inaugural address at the opening of the parliament's fifth session Oct. 1.

"We [Egyptians] cannot afford the luxury of [having] differences. Building nations during transitions necessitates harsh measures as it is during such periods that institutions and infrastructure are built; without them, states cannot progress," he told members of parliament.

Abdel Aal also vowed to engage Egyptians — government supporters and critics — in debates about future laws, pledging that all views (including those of opposition members) would be taken into consideration.

He also slammed the government for "failing to live up to its responsibilities," lamenting that the president is bearing the brunt of the government's weak performance. His rare rebuke of the executive branch has been interpreted by some parliamentarians as a prelude to a reshuffle of Cabinet ministers and governors — a potential move reminiscent of former President Hosni Mubarak's small Cabinet reshuffle during the 2011 uprising that forced him to step down.

Mubarak's action had failed to satisfy the anti-government protesters gathered in Tahrir Square and some analysts see this possible attempt, too, as "futile."

"Sisi's regime has felt extremely exposed in the current crisis and is trying old tools that won't work, such as uprooting the opposition and suppressing peaceful dissent," Amr Magdi, a Middle East and North Africa researcher at Human Rights Watch, told Al-Monitor.

"Genuine attempts at reform mean release of all those detained recently and in previous years for peacefully exercising their rights to express themselves freely and the repeal or amendments of several essential laws that Sisi has approved in recent years which criminalize free speech, peaceful gatherings and independent organizations," he said in reference to Egypt's draconian anti-protest law and the country's controversial NGO law.

"But we are not seeing this happen. Instead, we see more arrests and a harsh detention campaign against human rights defenders and organizations," Magdi said.

More than 2,000 people have been detained in a sweeping campaign of arrests since small, scattered anti-government protests broke out Sept. 20 calling for "the fall of the regime."

The demonstrations, which were dispersed quickly — but violently — by security forces, bear testament to growing public discontent over rising prices and mass repression.

The unrest also signals the breaking of the formidable fear barrier that Sisi has vigorously and persistently tried to reinstate since coming to power as president in mid-2014. From a state-controlled fear-mongering media and sweeping arrests of opposition members to mass death sentences, torture in prisons and extrajudicial killings, the Egyptian strongman has used a range of repressive tactics to instill fear within the society.

The suppressive measures had appeared to have succeeded in terrorizing Egyptians until the recent eruption of anti-government protests, a rare show of defiance that has prompted a series of concessions from the government in recent days.

On Oct. 3, the government announced a small reduction of 25 Egyptian piasters (1.5 US cents) in gasoline prices, after Cairo linked local fuel prices to international ones. Talk show host Ahmed Moussa had earlier announced on the pro-government Sada El Balad channel that "the prime minister has decided to form a committee that would meet on a quarterly basis to determine fuel prices in line with world oil prices and the price of the dollar."

This is the first such reduction since the government slashed fuel subsidies in early July, in a move that added to the financial strain on Egyptians, already struggling with double-digit inflation. Lifting fuel subsidies was part of a wider economic reform program carried out by the government to meet conditions set by the International Monetary Fund for a $12 billion loan granted over a three-year period (since 2016) to ease pressure on public finances. The economic overhaul has also included the introduction of a value-added tax and a sharp devaluation of the Egyptian pound to help resuscitate the economy. A report released by the national statistics agency in late July showed that nearly 33% of Egyptians were classified as poor in 2018, up from 28% three years earlier. The World Bank has painted an even bleaker picture, suggesting that 60% of Egyptians are "either poor or vulnerable."

In other moves to ease pressure on needy citizens angered by price hikes caused by the austerity measures, Minister of Supplies Ali Moselhi announced Oct. 1 that food ration cards would be issued to citizens whose cards were recently suspended, "provided they were found to qualify for food subsidies." He added that in the last seven months, nearly 2 million citizens had received ration cards after they were found to be deserving of the subsidies.

At a meeting with senior state and security officials Oct. 1, Sisi urged the concerned authorities to "intensify market monitoring and deal firmly with traders that engage in unfair monopolistic practices."

But analysts brushed off the government's overtures as "superficial" and "insufficient."

"It is highly unlikely that the few concessions offered this past week will be enough to calm the growing frustrations among much of the population. While one welcomes any relief in the cost of food for struggling Egyptians given that they have endured years of punishing inflation, the fact remains that a third of Egyptians are in poverty and 60% are near or below the poverty line," Timothy Kaldas, a nonresident fellow at the Tahrir Institute for Middle East Policy, told Al-Monitor.

"Much deeper reforms will be needed to address the legitimate grievances of the public who are frustrated not only by the lack of any sign of economic reward for their years of sacrifice, but are also angered by the sight of largesse for the nation's rulers," he said, in reference to online videos published by exiled building contractor Mohamed Ali alleging corruption by Sisi and senior military officers. The allegations are widely believed to have sparked the unrest. Sisi's acknowledgement that he had built presidential palaces and would continue to do so has added insult to injury, inflaming sentiments further.

Meanwhile, several pro-government deputies and journalists made an abrupt turnabout this past week, criticizing the government for stifling press freedom.

"The covert war against anyone who expresses an opinion must stop. This is not the Egypt for which we made sacrifices," Mostafa Bakry, a member of parliament and staunch Sisi supporter, said in an address to parliament. He was apparently alluding to the turmoil suffered by Egyptians since the Jan. 25, 2011, uprising.

"No one has the right to doubt the patriotism of others. While President Sisi is capable of steering the country [to safety], there urgently needs to be a review of current policies," Bakry said. His comments were met with sarcasm from activists on social media networks Twitter and Facebook, as Bakry had persistently demonized the 2011 uprising as a "foreign conspiracy."

Abdel Rehim Ali, another member of parliament and a pro-government journalist notorious for his scathing criticism of the January 25 revolutionaries, also called for a higher ceiling for media freedom in the country. His comments were ironic given that he had aired recordings of leaked phone conversations of opposition activists on his TV show "The Black Box," (broadcast on the privately owned El Mehwar Channel) vilifying them as "traitors" and "enemies of the state" in the months after Sisi took office.

Not surprisingly, analysts such as Kaldas took his call with a grain of salt.

"It is doubtful that the proposed reforms to loosen restrictions on the media are serious," Kaldas said. "The state's security institutions have dramatically expanded their grip on the country's media outlets and Sisi is also moving to stash the legislature with more retired officers, according to the independent Mada Masr news site. None of this indicates a willingness on the part of the regime to share power or resources with other sections of society aside from some symbolic crumbs."

Officials, meanwhile, have pointed the finger at "foreign entities" and the "terrorist Muslim Brotherhood" for the latest wave of protests.

Such accusations have fueled skepticism about the government's seriousness to follow through with its reform pledges.

"The public's message has yet to sink in. But for now, it seems more likely that the government will only commit to superficial reforms while Sisi continues to consolidate power at the expense of Egypt's already feeble governing institutions and civil society," Kaldas said.