Following President Donald Trump’s announcement that the United States would recognize Jerusalem as the capital of Israel, Egyptian President Abdel Fattah al-Sisi has been careful to strike a delicate balance between allowing public condemnation of Trump's decision and not letting protests get out of hand. 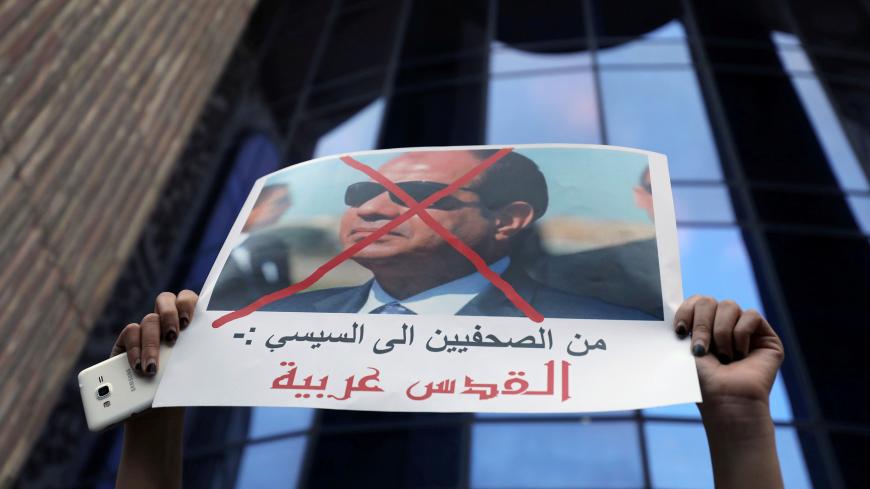 A demonstrator holds up a sign at a protest against US President Donald Trump's decision to recognize Jerusalem as the capital of Israel, in front of the Syndicate of Journalists in Cairo, Dec. 7, 2017. The sign reads, "From the journalists to Sisi: Jerusalem is Arab." - REUTERS/Mohamed Abd El Ghany

A protest rally planned by Egyptian opposition groups and members of liberal political parties outside the Arab League Headquarters in downtown Cairo on Dec. 9 was called off after the Interior Ministry refused to issue the necessary security permits for the demonstration to be held. The rally, meant to denounce US President Donald Trump’s recent decision to recognize Jerusalem as the capital of Israel, had been timed to coincide with an emergency meeting of Arab foreign ministers held to coordinate a unified response to Trump’s move. The foreign ministers later released a statement calling on the United States to reverse its decision, which they described as “a provocation to Muslims and Christians in the region” and “a dangerous violation of international law and UN Security Council resolutions.”

A day earlier, hundreds of Egyptians had demonstrated at Cairo's Al-Azhar Mosque after weekly Friday prayers, chanting anti-Israeli and anti-American slogans and raising placards reaffirming Jerusalem's Arab and Islamic identity. Dozens of worshippers also protested at Al-Qaed Ibrahim mosque in central Alexandria after Friday prayers, chanting "Jerusalem is the eternal capital of Palestine" and burning an Israeli flag. The protests, staged amid a heavy police presence, came on the heels of an earlier demonstration staged outside the Journalists Syndicate in downtown Cairo on Dec. 7, at which dozens of protesters set fire to Israeli flags. Ten people arrested by security forces at the protest site were released on bail three days later, but prosecutors ordered the detention of two journalists, Ahmed Abdel Aziz and Hossam El Suweify (who were among the protesters), for 15 days pending investigation on charges of “participating in an illegal protest” and “inciting hatred against the regime.” An anti-protest law issued in November 2013, which has been slammed by rights groups as “a grave threat to freedom of assembly,” bans demonstrations held without prior approval from the police and gives security forces free rein to use excessive force against protesters.

Defying the anti-protest law, hundreds of university students marched on campus at Al-Azhar University on Dec. 10 to condemn Trump’s move. Al-Azhar University, Islam’s oldest learning institution, also had been the scene of violent student protests in the wake of the military overthrow of Islamist President Mohammed Morsi in 2013. In a rare show of solidarity with the students, faculty members and staff joined the Dec. 10 protest, waving Palestinian flags and chanting anti-American slogans. Dozens of students and professors also rallied against the US decision at Ain Shams University in Cairo and Menoufiya University in the Nile Delta province of the same name. The participation of senior faculty members in the rallies was a sign that authorities had given the green light for the on-campus protests “to allow students to vent their anger and frustration,” a media professor at Al-Azhar told Al-Monitor. He spoke on condition of anonymity as he was not authorized to speak to the press.

Anger is simmering in Cairo and other Egyptian cities over soaring food prices as annual inflation rates surged to their highest in decades, hitting 33% in July, fueled by cuts in fuel subsidies. The slashing of the subsidies is part of a five-year economic reform program launched by the government in mid-2014 to secure a $12 billion bailout loan from the International Monetary Fund. The reforms have included the flotation of the Egyptian pound with the aim of drawing foreign capital back to the country. The exchange rate has since fluctuated, reaching a record 19.2 Egyptian pounds to the dollar in the last weeks of 2016, from 8.89 per dollar at the time the pound was floated. While the exchange rate appears to have stabilized in recent months, hovering between 17.2 and 17.6 to the dollar, the devaluation of the currency has pushed the price of many goods out of the reach of ordinary citizens.

Despite recent signs that the economy is improving — in November, inflation rose at its slowest pace in nearly a year and the overall balance of payments surplus rose to $5.1 billion from $1.9 billion — recovery is still a long way off for many Egyptians, who are licking their wounds after enduring the economic hardship of the past year.

Egyptian young people who took part in the 2011 uprising that forced longtime president Hosni Mubarak to step down are also deeply disappointed that their revolution has “gone to waste.” In the diminishing space for free expression in the country since the 2014 overthrow of Morsi, the revolutionary activists have increasingly turned to social media to vent their frustrations over what they describe as the regime’s “counter-revolution.” Witnesses at a US congressional hearing on human rights in Egypt last week concurred that the country has “descended into a military autocracy with a less-than-stellar human rights record since the 2011 uprising.” Citing the anti-protest law and the nongovernmental organizations law as examples of “repressive legislation” passed by the government of President Abdel Fattah al-Sisi, they lamented “the rampant rights violations,” including the pretrial detention of young activists and Muslim Brotherhood supporters, torture in prisons, forced disappearances and the blocking of more than 400 websites the government claims are linked to terrorist organizations. A statement released by Egypt’s Foreign Ministry criticized the hearing, calling it biased and a “deliberate distortion of the situation in Egypt.”

With tensions running high in the country, the authorities are concerned about a possible outbreak of anti-government protests and are taking no chances.

“The government knows that people have enough on their plate right now. If the anger escalates further, it could lead to another major eruption similar to the one witnessed in 2011,” professor Hassan Nafaa of Cairo University’s Faculty of Economics and Political Science told Al-Monitor.

“If the government allows street protests, there are concerns the public anger would be directed at the regime itself. The only protests that are allowed to take place are the ones that take place within the confines of university campuses so that they can be easily dispersed by security forces if need be,” he added, pointing to the arrests of protesters made in recent days as “proof of how jittery the government feels.”

The government loyalist media — which traditionally fuels anti-US sentiment — has been careful to contain the rising anger, downplaying Trump's recent announcement and focusing instead on criticizing Hamas for “failing to live up to its promises to defend Jerusalem.”

“Trump’s decision offers nothing new. The US has considered Jerusalem as the Israeli capital for the past 22 years,” read a banner in the pro-government Al-Watan newspaper on Dec. 6. Khaled Salah, a pro-Sisi journalist and editor-in-chief of the privately owned Youm7, has focused on lavishing praise on the army. “Egypt is the only country in the Arab region still standing on its feet. This is because the people stand united behind their army and were wise enough to elect a military man with a vision,” he said in an episode of his talk show broadcast on the privately owned Al-Nahar TV channel. State-owned newspapers Al-Ahram and Al-Akhbar have meanwhile devoted their coverage to the global reactions to Trump’s decision.

Instead of the usual fiery mosque sermons lambasting the Israeli occupation, the unified Friday sermon at mosques across the country this past week focused on “family values.” Clearly, the clerics had received instructions not to fuel the already inflamed public anger. Ahmed El Tayeb, the grand sheikh of Al-Azhar, however, has adopted a more hard-line stance than the other clerics (civil servants appointed by the Ministry of Religious Endowments) who are toeing the state line for fear of losing their jobs. Earlier this week, he announced that he had canceled a meeting with US Vice President Mike Pence during Pence's visit to Cairo next week. Tayeb has also warned in a conversation with visiting former British Prime Minister Tony Blair that “if the door of moving foreign embassies to Jerusalem is opened, this would open the gates of hell.” Egypt’s top cleric also called on Muslim clerics to devote this week's Friday sermons to Jerusalem, rejecting any attempt to alter the city’s Arab identity.

Trump’s announcement on Jerusalem has provoked an international outcry, with US allies in the Middle East suggesting it had “needlessly stirred more conflict in an already volatile region.” The unrest witnessed in recent days may just be the tip of the iceberg. Realizing that he is walking on thin ice, Sisi is treading cautiously: He has publicly condemned the move and is allowing the Egyptian public to vent some of their anger. His supporters, meanwhile, exhort fellow Egyptians to focus on domestic issues. “Egypt’s interests must come first; we have enough problems of our own,” tweeted Ahmed Wagih, who describes himself as “a fascist against the enemies of the state.”

“Those complaining about the Trump decision should consider moving to Gaza,” Nadia Lamloum, executive director of the British-Egyptian Business Association, wrote in a Facebook post.