Several Egyptian universities approved the entry and stationing of police forces on their campuses, in a bid to disperse student protests. 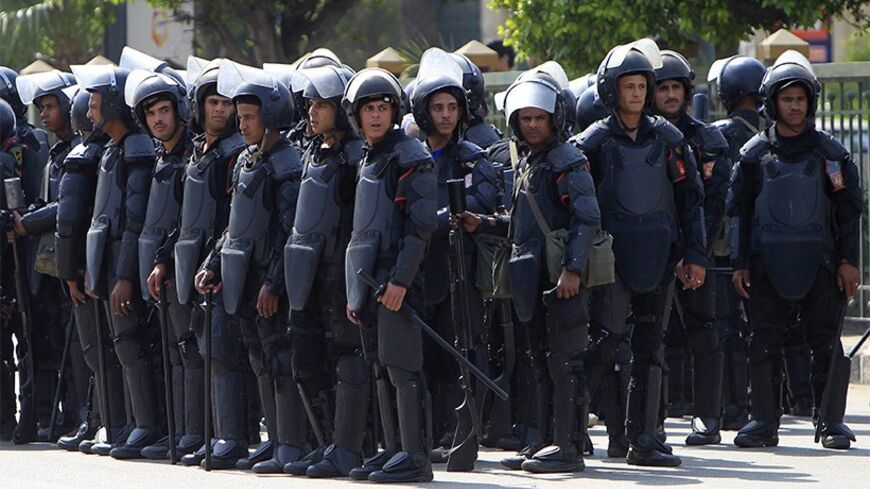 On April 9, the administration of Kasr Al Ainy Medical School sent an official letter to the Interior Ministry expressing its approval of the entry and stationing of police forces on its campus. This decision followed the same approval expressed by Cairo University and Al-Azhar University, which are witnessing ongoing student protests that often end with the arrest of dozens of students. Previously, police were not allowed on campus grounds and security was maintained by private guards employed by the universities.

The students’ response was voiced by Mahmoud Salah, a spokesman for Students Against the Coup at Al-Azhar University. Salah said that any action taken by the university to stop the students’ demonstrations will not discourage them from continuing their protests to topple the military rule, secure the release of students detained since the events of June 30 and prosecute those responsible for the killing of students who were protesting on campus.

“Students in various Egyptian universities are constantly staging protests and are countered by security forces with tear gas, bullets and live ammunition,” explained Salah to Al-Monitor. He also asserted that the higher the number of victims, the angrier students get.

For his part, Interior Ministry spokesman Maj. Gen. Hani Abdul Latif denied in a statement to Al-Monitor the return of regular university guards, saying that police forces stationed at universities are trained to break up riots and their task is to end any disputes that occur outside campus grounds. He explained that they have the right to enter the university premises in coordination with the heads of universities to prevent students from vandalizing and stirring chaos and control protests. “These forces only used tear gas to disperse students, and they arrested those involved in acts of vandalism,” said Abdul Latif.

The president of the faculty of engineering’s student union at Cairo University, Abdul Rahman Abdul Nasser, told Al-Monitor that there was no need for police presence on or off campus. He asserted that the chaos they are trying to control did not result from student demonstrations, which are actually peaceful protests. “Violence only started when police intervened to disperse students and fired tear gas and bullets, which forced these students to respond by throwing stones, thus leading to clashes between the two parties,” Abdul Nasser noted.

Impact of the police presence on the educational process

Abdul Nasser confirmed that students are more nervous to go to university and attend lectures because they are afraid of getting hurt during clashes. He explained that many students who did not even participate in protests were shot, wounded or even arrested while inside university premises.

For his part, Ahmed Zaree, spokesman for Al-Azhar University, talked about the presence of security forces on university grounds. He told Al-Monitor that security forces stationed on campus will ensure safety, support the continuation of the educational process and prevent students who stir riots from vandalizing university facilities.

Aftermath of police raids on campuses

Mohammed Naji, a researcher at the Academic Freedom and Students Rights Program of the Association of Freedom of Thought and Expression (AFTE) said to Al-Monitor, “The entry of security forces to the campuses has led to the death of 13 students since the beginning of the 2013-2014 academic year. This includes six students from Al-Azhar University, four from Cairo University, two from Alexandria and one from Ain Shams University.” He confirmed that AFTE has videos proving that police officers had fired live ammunition at students.

According to a report drafted by AFTE, 1,328 detained students were arrested inside university premises from the start of the academic year to March 18. The majority of these students are from Al-Azhar University. The report indicated that court rulings were issued against a number of them. The most widely reported case was the ruling issued against 12 students from Al-Azhar University who were arrested during student demonstrations. In accordance to this ruling, they were sentenced to 17 years in prison, and they have to pay a fine of 65,000 Egyptian pounds ($9,300). It is worth mentioning that AFTE sent a report to Minister of Higher Education Wael Degwy, which included the names of the detained students and the circumstances of their arrest, requesting him to work on their release. However, no student has been released to date.