Hundreds of Egyptian students remain in prison, with as many as a third of them randomly detained by authorities without evidence of participating in protests or supporting the Muslim Brotherhood. 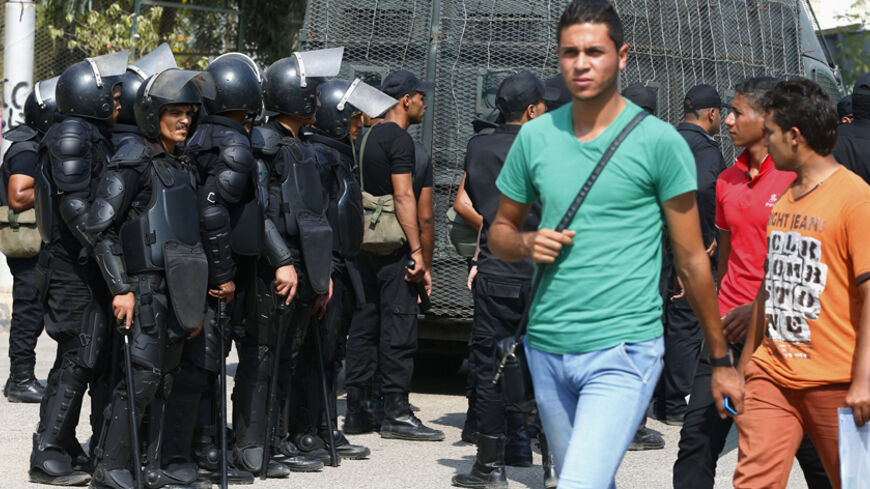 Al-Azhar University students walk past riot police during a protest conducted by a pro-Muslim Brotherhood student movement known as the Students Against the Coup, in the Nasr City district, Oct. 12, 2014. - REUTERS/Amr Abdallah Dalsh

CAIRO — University students typically do not dream of spending their last academic year in prison, instead of attending their lectures and passing their exams in peace.

Hundreds of Egyptian students are in prison, some of whom were arrested while participating in demonstrations on campus, while as many as a third of detainees were randomly rounded up, according to student groups and human rights organizations who spoke to Al-Monitor.

Ahmed Shams, a student of physical education at Al-Azhar University, was randomly arrested on Dec. 28, 2013, and is held in Abu Za’abal prison.

His mother told Al-Monitor her son was arrested in front of Al-Azhar student residences while he was on his way to attend his exam.

“I phoned my son and I warned him against going to the exam after I saw on TV that some faculties of Al-Azhar were burned and that there were clashes,” she said. Her son told her he would ask the police stationed around the university grounds to help him attend the exam, but “the police arrested him instead.”

She said Ahmed was accused of burning Al-Azhar’s faculty of commerce even though “he did not enter the campus,” and that the faculty was burned at around 9 a.m. while her son was arrested at 1:30 p.m.

She added that her son was accused of belonging to the banned Muslim Brotherhood, “However, my son participated in the June 30 demonstrations that were orchestrated against the Muslim Brotherhood in his hometown of Monufia governorate.” Monufia is about 72 kilometers, or 45 miles, from the capital, Cairo.

The mother said there was inconsistency in the charges leveled against Ahmed, and the police report accused him of burning the faculty of commerce, while the prosecution did not, but accused him of other charges, like attempting to disrupt exams and assaulting police personnel.

She said she had heard that her son was referred to a criminal court in July 2014, revealing at the same time that her son had spent seven months in prison without being put to trial, adding “the judge kept renewing his imprisonment.”

She said that Ahmed was supposed to be released, given his poor health, along with 65 students on March 10, but everything stopped after the bombings at Cairo University on April 2.

Lawyer Mokhtar Mounir, who is working with the Association for Freedom of Thought and Expression and the Students’ Observatory, told Al-Monitor that many students were tried in absentia despite their being in prison. When asked why, he said the prisons’ management refused to send them to courts for “security reasons.”

Mounir said that the judges usually adjourn the trials of the students and extend their imprisonment, and that it is illegal for the judge to postpone the trial several times based on the same reason. However, “the judges do not ask the prison administration about the transfer of students,” he said.

Mounir criticized the length of the remand period of the students’ imprisonment, saying, “They are not dangerous to national security.”

He said a third of the detainees were randomly rounded up, and that there were daily arrests of students during the period between Dec. 28, 2013, and Jan. 5, 2014.

According to Mounir, the prosecution interrogates the arrested students at temporary holding areas and police stations, in the presence of police officers, under psychological pressure, which threatens the integrity of investigations.

“About 70 students have gone on hunger strike since Sept. 5, 2014, in Abu Za’bal prison, including Ahmed Shams who began on Sept. 13,” Mounir said, noting that the students do not receive medical care.

“The students’ ages range between 19 to 23 years old and the issued verdicts against them range between three to five years in prison,” he added.

According to the latest figures released by the Adalah Center for Rights and Freedoms in September, there are about 702 detained students in prisons and about 1,375 students suspended from their universities.

Another case of random arrest of a student is Mohamed Nasser, a student in his fourth year at the faculty of commerce at Al-Azhar University, who was arrested on Dec. 9, 2013, in a cafe in front of Al-Azhar student residence. He was released on March 18 from Abu Za’bal prison.

“I was arrested along with nine of my friends, and on the day of our arrest there were fierce clashes at Al-Azhar campus, as two police armored vehicles were burned and some police personnel were assaulted,” Nasser said.

After being driven to Nasr City police station, they were interrogated by a police officer wearing plain clothes, and they later learned he was part of the national security apparatus.

“The officer did not ask us about any clashes or protests but was asking about our activity inside the university,” he said, and he and his friends belong to different political liberal and youth movements.

However, Nasser revealed that the prosecution accused them of stealing a police weapon, assaulting police personnel, breaching the protest law, belonging to the Brotherhood, endangering state security, setting police vehicles on fire and assaulting a journalist.

He said most of them did not take the exams of the first semester of the academic year 2013-14.

It's not clear if there will be improvements in the treatment of students in the next academic year. So far, there have been mixed messages from authorities, with the Egyptian attorney general’s decision to release 116 students on Sept. 17, only to be followed by the arrests of dozens of students in their homes on Oct. 11. Meanwhile, classes resume amid continued turbulence and uncertainty.