Egypt cracks down on students

As protests continue at Egyptian universities, the authorities have arrested activists and are working to restrict political activity by students. 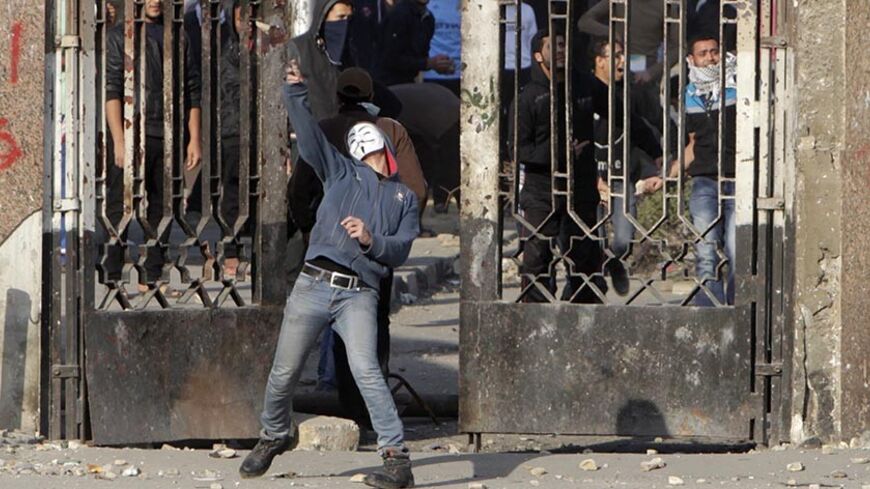 A student of Al-Azhar University, who is a supporter of the Muslim Brotherhood, throws a stone during clashes with riot police and residents of the area at the university campus in Cairo's Nasr City, Jan. 8, 2014. - REUTERS/Mohamed Abd El Ghany

Student demonstrations have become a daily occurrence at Egyptian universities. Reports estimate that a monthly average of 230 protests were staged on 24 campuses in the first part of the current academic year. By and large, student mobilizations have grown in recent months in response to the unprecedented, forceful suppression of civil rights expressed through traditional channels of political activism.

According to the Association for Freedom of Thought and Expression (AFTE), 692 students from universities across Egypt are currently being detained in a clampdown that has largely targeted the Islamist component of the anti-military opposition movement, but has also roped in liberal activist and students. Dozens of students have been handed prison sentences of up to 17 years on charges related to demonstrating, belonging to the Muslim Brotherhood and inciting violence. Local media have routinely called into question the independence of student political engagement, alleging that the upsurge in student protests is an extension of Muslim Brotherhood–backed activity in various parts of the country.

With the gradual neutralization of street politics in the wake of the June 30 protests, youth activism is increasingly being channeled through the relatively independent space of university campuses. Following Mohammed Morsi’s ouster in July, at Al-Azhar University, a stronghold of Muslim Brotherhood support, Students Against the Coup (SAC) was founded as an Islamist-led coalition with representation in universities across Egypt. The SAC has succeeded over the past four months in consolidating a potent base of students from various trends across Egypt opposed to the current regime.

Meanwhile, the Interior Ministry, like the media, claims that student protests are being orchestrated by the Muslim Brotherhood, from its perspective as part of a plot to spark a wide-ranging confrontation with the security forces. Hoda Abdel Aziz, an independent Cairo University student, disagrees. “The strength of the Muslim Brotherhood presence in these protests is an organic outcome of the persecution of the movement's members and does not discount the diverse nature of the student opposition movement,” she asserted.

SAC spokesman Yousef Salhein told Al-Monitor that opposition to the ruling authorities is not a strictly Islamist orientation, noting the increasing persecution of outspoken journalists and liberal democracy activists. “We have representation in all universities, including those with a small Islamist presence. We welcome any student who is against the coup and supports democracy, regardless of their political background,” he said.

Various student demonstrations targeted by the police over the past few months have been distinctly independent. A student's death following the violent dispersal of a protest at Cairo University on Nov. 28 spurred protests from an array of political trends across the nation. Of note, a sit-in at the Zagazig University Faculty of Engineering was organized by secular and independent groups and ended with the arrest of leftist student activists, among them members of the Constitution Party. Abdel Aziz told Al-Monitor, “There is a consensus on the core issues: independence of our universities, freedom of expression and association and resistance of police state measures.”

The government’s response to student mobilization echoes the political dynamics in Egypt at large. Its anti-protest law, effectively banning political gatherings on the street, is paralleled at universities by an unannounced decree issued on Oct. 21 by the Supreme Council of Universities, an agency under the Ministry of Higher Education. The decree places heavy restrictions on demonstrations and gatherings of a political or partisan nature in universities nationwide.

“While the protest law doesn’t apply to students demonstrating on campus, the decree essentially enforces its core elements,” noted Mohammad Abdel Salam, a researcher for the Academic Freedom and Student Rights Program at AFTE. “It bans protests against the army and the police, against state security institutions in general.”

A month later, a cabinet decision permitted the immediate and unauthorized intervention of security forces at campus protests. It nullified a major achievement of the evolution toward academic freedom — the implementation of a 2009 administrative court ruling banning police from university campuses and introducing administrative security. Islamist and secular student movement leaders alike have rejected the cabinet's decision, arguing that it essentially gives the police a mandate to regulate student activities.

The largest number of student protests have been those staged on campuses across the Cairo governorate, accounting for almost 15%, according to International Development Center, a local research organization. Giza was attributed 13.6%, followed by, Alexandria and governorates of the Nile Delta and Upper Egypt.

Many protests have ended in violent clashes, with police forces regularly using tear gas, live ammunition and birdshot to disperse crowds. Alexandria University witnessed the most recent face-off, on Jan. 23, during which one student was killed and at least five people were injured.

Cairo University spokesman Adel Abdel Ghafar insists that police intervention is necessary to “ensure the orderliness of the academic process,” but SAC's Salhein maintains that authorities are known to play the security card to justify the disproportionate use of force to quell unrest. According to Abdel Salam, the researcher, the sustained crackdown on demonstrations has claimed the lives of seven students since the beginning of the academic year. More than 500 have been injured.

In one incident, on Jan. 16, security forces stormed the campus of Cairo University in a raid that ended with the death of two students. When asked why the university chairman had chosen to call in Interior Ministry forces, Abdel Ghafar told Al-Monitor that the university administration had been “forced to do this. … No one wants to prevent peaceful protests but when it gets violent — they attack the deans office and attempt to halt exams — it is no longer peaceful and must be confronted.”

Protesters at Cairo University denied claims of vandalism made against them. Eyewitnesses confirmed that a gathering took place outside the university gates and that students fled inside for cover when the police began to disperse the crowd. Abdel Salam believes that police intervention is dangerous. “This is when the violence occurs. This is when clashes erupt and students lives are in danger. This is when the educational process is disturbed,” he noted.

Aside from the obvious threat of lethal force, the biggest obstacle facing students, Abdel Salam contends, is an article added to the University Regulations Law by the Supreme Council of Universities on Jan. 6 allowing the unfounded investigation and disciplining of students. He argues that the expulsion of at least 200 students from Al-Azhar thus far, ostensibly for acts of violence and sabotage, is groundless and arbitrary, with the ulterior aim of weakening political activism among the student body.

“Supreme Council decisions,” he noted, “have no legal basis and restrict freedoms that the student charter, the Ministry of Higher Education–approved document organizing student activities, does not restrict.”

Egypt’s student movements had historically been one of the few relatively unrestrained fronts for political organizing. Universities were a hotbed of dissent until President Anwar Sadat issued the student charter in 1979, curtailing the right to organize freely at universities. Under Hosni Mubarak, the charter was altered to allow further administrative and security intervention in student affairs. Despite intermittent periods of increased friction with the state, there has been no true revival of the student movement as an instrumental political force in Egyptian society.

While the Interior Ministry routinely insists it is battling Morsi supporters, a security source who requested anonymity told Al-Monitor that ultimately, the government-led efforts to ban student demonstrations go beyond containing Muslim Brotherhood activities. “The aim,” he said, “is to depoliticize the student body and instill the idea that student political engagement is prohibited.”