A controversial bill that would allow foreign nationals to purchase Egyptian citizenship has passed through parliament and awaits the president’s signature. 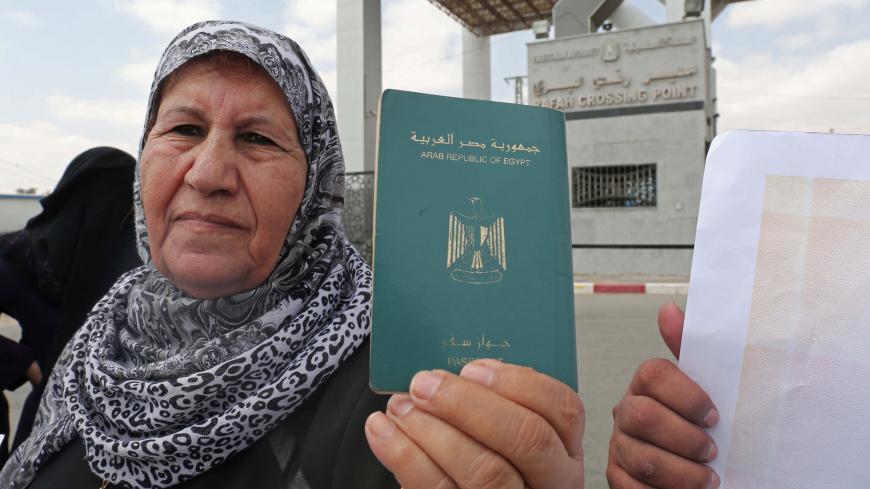 A Palestinian woman holds her Egyptian passport during a rally at the Rafah border crossing between Egypt and Gaza, Gaza Strip, July 6, 2017. - SAID KHATIB/AFP/Getty Images

Egypt is always looking for ways to improve the country’s long-suffering economy, but citizens are divided over whether the latest plan is an innovative idea or an indecent proposal.

Critics bemoan the legislation as “shameful” and say it compromises national security. Supporters welcome it as a means of wooing foreign investors.

On July 15, Egypt’s parliament approved a bill that, if ratified by the president, will allow foreign nationals to apply for citizenship — but it will cost them. Candidates for citizenship must deposit at least 7 million Egyptian pounds (about $391,000) in an Egyptian bank and leave it there for five years. Then, if the Ministry of Interior accepts an applicant's naturalization request, the deposit will be transferred to the treasury, boosting the country's foreign currency reserves.

Currently, foreigners must live in Egypt at least five years before they can apply for citizenship.

The draft law has sparked controversy among legislators and analysts and on social media networks.

Kamal Amer, head of parliament's Defense and National Security Committee, which proposed the bill, told Al-Monitor that the move "aims at attracting much-needed foreign investments in the country" and is "in line with the new investment law, passed in the summer of 2017, which offers incentives to foreign investors and removes many of the long-standing bureaucratic hurdles that have pushed away potential investors."

Faced with a burgeoning foreign debt that surged to an all-time high of nearly $83 billion for the period that ended in December 2017, according to the Central Bank, Egypt is seeking to lure back foreign investors that shied away during the transitional period of political and economic turmoil that followed the 2011 uprising. A series of economic reforms introduced by the government since November 2016 succeeded in attracting $8.7 billion in foreign direct investment in the fiscal year that ended June 30, 2017 — a 14.5% increase from the previous year. The government hopes the economic reforms — which are tied to a three-year, $12 billion loan from the International Monetary Fund — will further boost investors' confidence in the economy. The reforms included floating the pound, lifting state subsidies on fuel and imposing a value-added tax.

"This happens in other countries too. Lots of foreign residents are already in Egypt, many of whom have been here for years. They love the country and respect the law. Their investments can give the economy the kiss of life it needs to recover," Abdel Fattah told Al-Monitor.

But critics such as opposition lawmaker Haitham El Hariri are skeptical about the draft law. Speaking during the July 15 parliamentary session held to discuss the proposal, El Hariri said, "My colleagues tell me it’s ‘shameful,’ but I see the bill as a natural and expected move from a government whose policies include selling anything and everything in return for money — even Egyptian nationality. Egyptian citizenship is for sale in exchange for a five-year bank deposit."

"We [opponents of the draft law] are not against foreign investments, as some believe. We welcome any investments in the country … but there's a big difference between offering investors residency and facilitating visas for them on the one hand and granting them citizenship on the other hand. What can Egypt offer foreign investors? We have no education, no health services, no jobs," he lamented.

Several other legislators, including pro-government parliament member Mustafa Bakri, also rejected the bill. In a rare show of defiance, Bakri insisted, ”Egyptian nationality is not for sale."

Nader Fergany, a sociologist and economist who co-authored the UN Development Program’s Arab Human Development Report in 2002, went further, describing the bill as "catastrophic." He told Al-Monitor that if signed into law, "It could pave the way for Israelis regaining a foothold in the Sinai Peninsula.” He was referring to the territory Israel seized in the 1967 War of Attrition and returned to Egypt in 1982 under terms of the Camp David Peace Accords.

Fergany's concerns are shared by many Egyptians, who vented their anxiety and frustration on social media networks. Columnist Abdel Azim Hammad was quuoted by The New York Times as saying in a Facebook post (that was later deleted) that the government should instead focus on "retrieving the money that was stolen and smuggled” out of Egypt. He was referring to President Hosni Mubarak's cronies who fled the country during the 2011 uprising.

Some members of the opposition Muslim Brotherhood, now outlawed in Egypt, see the bill as a new opportunity to lash out at the current government.

Amr Abdel Hady, a member of the constituent assembly that drafted the 2012 Constitution under Islamist President Mohammed Morsi, who was ousted in 2013, sarcastically applauded those whom he said are the real beneficiaries of the bill.

Others see the move as reminiscent of an earlier, equally controversial decision to transfer two Red Sea islands to Saudi sovereignty. In an opinion piece published July 16 on the privately owned news site Kateb, researcher Elhamy el Merghani wrote that the bill recently approved by parliament is "not the first of its kind”; rather, it is one in a series of similar laws and decrees that allow foreigners to purchase property, land and/or public assets in the country. In addition to the example of the sale of the two islands, he cited an October 2016 presidential decree that allowed Bahraini King Hamad bin Issa al-Khalifa to buy property in the Red Sea resort of Sharm el-Sheikh.

Egyptian property law permits foreign nationals to buy property in Egypt with prior approval from the Council of Ministers; however, buyers are obliged to use the property solely for residential purposes. Another decree issued by the armed forces in 2012 bans ownership of property and land in the Sinai Peninsula, the Red Sea area, archaeological sites and other areas authorities consider "strategic."

"The transfer of Tiran and Sanafir [the Red Sea islands] to Saudi Arabia is no different from the sale of the public sector and other Egyptian assets, nor is it different from granting citizenship to non-Egyptians. The whole country is for sale," Meirghani complained.

As a result of authorities' heavy-handed campaign to suppress political dissent, the reaction to parliament's latest decision on citizenship is "fairly subdued."

"While anger is simmering over parliament's controversial decision and the recent price hikes, there is little the people can do,” Rasha El Ibiary, a researcher on media and ethics, told Al-Monitor. “There will be no more protests because of the risk of arrests and detention. Social media networks are the sole platform left for Egyptians to vent their frustrations, and even there, many activists are careful about what they write.”