Will investors shell out cash for Egyptian citizenship?

To encourage foreign investment and help the country's financial recovery, the Egyptian parliament is considering amending the constitution to grant citizenship to investors. 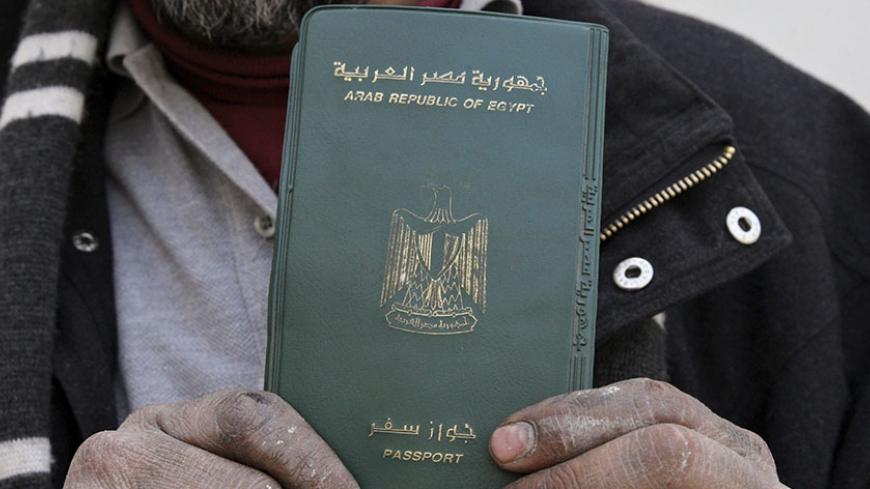 An Egyptian man shows his passport after voting on a referendum on his country's new constitution at the Egyptian Embassy in Amman, Jan 9, 2014. - REUTERS/Majed Jaber

The Egyptian government has recently proposed a draft law to amend the country’s nationality law. It would give investors the right to apply for citizenship after living and investing in Egypt for five years. The bill has caused controversy and dispute both within parliament and among the public. While some Egyptians argue it will encourage investment and help the country’s financial recovery, others maintain that nationality is not something that should be sold.

The draft law was submitted to the Cabinet by Egyptian economist Sameh Sidqi earlier this month. It would amend Presidential Decree No. 89 of 1960 on Entry, Residence and Exit of Foreigners and Law No. 26 of 1975 Concerning Egyptian Nationality. The government announced Aug. 2 that it was being discussed in the Egyptian State Council.

He said that approving this bill “requires amending the clause related to nationality in the Egyptian Constitution, as well as another clause of the Investment Law, so that any investor who deposits the required sum may be granted Egyptian nationality if he or she meets the conditions set by the Cabinet.”

Sidqi argued that more than 5 million expatriates now reside in Egypt, and they include Iraqis, Syrians and Libyans, in addition to 4 million Sudanese living in Egypt since the era of Sudanese President Gaafar Nimeiri. Like Egyptians, these expatriates benefit from subsidies on oil, electricity, bread and other food supplies.

“Such legislation is applied in many countries that encourage foreign investment, including the United States and Canada,” Sidqi added, indicating that he had previously presented this proposal to the Dubai government when working as an economic adviser during the international financial crisis a few years ago. Although the proposal was initially approved, he said, the number of expatriates that would be granted Emirati nationality exceeded the Emirate’s native population, leading the Dubai government to reject the proposal.

Sidqi pointed out that at least 100,000 of the foreigners living in Egypt with no criminal records wish to obtain Egyptian citizenship. This means that the state could potentially benefit from billions of dollars without recourse to loans subject to terms from the International Monetary Fund (IMF).

Egypt is currently negotiating a $5 billion loan with the IMF in order to cover growing budget deficits as a result of the decline in tourism and tourism revenues.

Sidqi further said that his proposal has already been approved by the Cabinet and has now been submitted to the State Council and parliament for ratification.

According to Sidqi, the opposition claims that the bill would grant citizenship to anybody in return for money. However, this not the case, he argued, as competent authorities shall conduct background checks on all applicants, including their relatives up to a fourth-degree kinship.

Sidqi added that to obtain Egyptian nationality, applicants must submit a certified list of all the countries they traveled to in the past 10 years, noting that the Egyptian government reserves the right to withdraw citizenship, without prior notice, from any applicant convicted of a crime against honor, spying for a foreign country against Egypt or if the applicant obtained another citizenship.

He further explained that the bill would not give equal opportunity for all applicants even if the financial requirement is met. Other criteria will be taken into consideration, giving certain applicants an advantage over others. For instance, the holders of a doctorate degree will be given a higher evaluation than those with a master’s degree. This way, applicants will be carefully selected so that Egypt can benefit from the best foreign elements.

Sidqi dismissed the possibility that the bill would open the door for fugitives or individuals affiliated with terrorist organizations, arguing that by submitting an official application for Egyptian nationality, these individuals will be risking a security inquiry, whereas terrorists prefer to keep a low profile.

The man behind the proposal stressed that many Libyans, Iraqis and Syrians are wealthy, with considerable investments in Egypt, and by obtaining Egyptian citizenship, they’ll be able to settle down with their families.

In the past three years, revolutions across the Arab world forced many to flee their home countries. For instance, some Syrians who chose Egypt as a destination launched investments in 6th of October City west of Cairo, while Libyans relocated to Alexandria, the northern coast and Borg el-Arab, where they invested in real estate. Sidqi said that Cottonile, a famous clothing company, is owned by a Syrian who has been living in Egypt for 20 years and wishes to obtain citizenship at any price.

Parliament member Alaa Abdel-Moneim of the For the Love of Egypt bloc rejected the bill, telling Al-Monitor, “Many European Union countries like Portugal, Cyprus and Malta grant nationality in return for money. But why would anyone seek an Egyptian nationality knowing he or she can become a citizen of one these countries and benefit from their membership to the EU?"

He said that those opting instead for the Egyptian nationality would likely be people well aware that these European countries would not grant them citizenship for security reasons, thus opting for an Egyptian one for hidden motives. Abdel-Moneim stressed that the bill would turn Egypt into a refuge for the world’s fugitives, arguing that implementing this law will have a demographic impact on Egyptian society.

Abdel-Moneim has demanded that the government reveal to the public the number of potential applicants as concluded from the examination of this proposal, as well as the expected number of expatriates to be naturalized after implementing the bill.

Muataz Mahmoud, the head of the parliamentary housing committee, told Al-Monitor that the bill is by no means an Egyptian invention, as it is currently applied in many countries around the world, noting that, if passed, the bill would attract at least 50,000 individuals. As a result, the government can make up to $250 billion out of it.

Mahmoud said that the bill would not constitute a national security threat as some might claim, as citizenship would only be granted after conducting a background check on the applicants, which will prevent the infiltration of terrorists.