In an effort to bolster Egypt’s economy, parliament passed a law that grants residency to foreigners in return for bank deposits in hard currency. 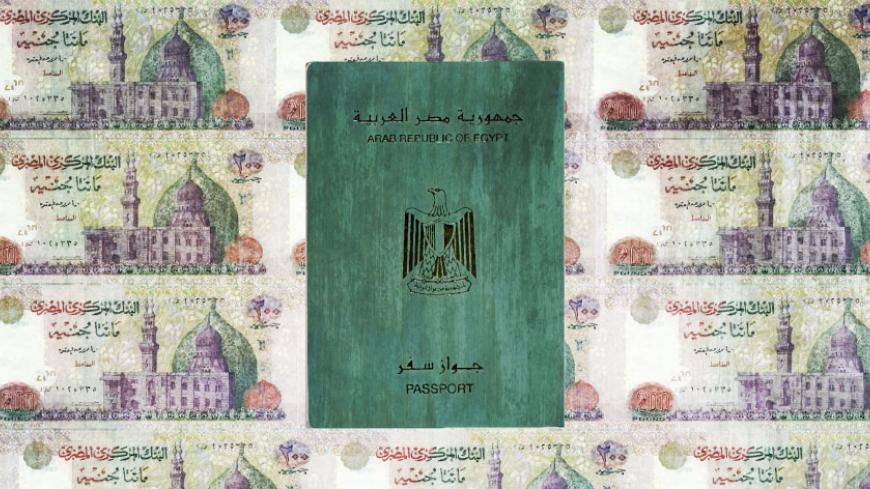 According to a new law, foreigners can apply for Egyptian citizenship after five years of residency. Illustration by Ed Woodhouse/Al-Monitor -

Egypt’s economists are lauding a new law that grants residency to foreigners in the North African country in return for bank deposits in hard currency. They say the new law will help ease the country’s foreign currency crunch and boost the national economy.

The law was approved April 27 by the Egyptian parliament’s Defense and National Security Committee with its head saying that it will serve Egypt’s interests and will not negatively affect national security.

Kamel Amer, the head of the committee, noted that the law grants residency in return for deposits, which is different from granting citizenship in return for investments.

According to the new law, foreigners can only apply for citizenship after five years of residency. Amer said that citizenship will be granted only if the relevant conditions are met and after a security clearance. The parliament’s committee did not announce the amount of the deposit that foreigners are required to put in Egypt’s banks if they are seeking Egyptian citizenship. Local media reports claimed that the amount a foreigner must put in an Egyptian bank to get a five-year residency permit was $500,000. The foreigner can then give up that dollar deposit to the government if he or she wants to obtain citizenship after five years of residency.

Amer said that the new law comes amid increasing demand from foreigners to get a residency in Egypt, adding that putting a foreign currency deposit in Egyptian banks is regarded as indirect investment and would encourage Arab and foreign investors to take part in Egypt’s economic projects.

The Egyptian government has recently started to introduce economic reform measures in order to ease its currency crunch and stimulate economic growth.

The country’s currency peg and a decline in foreign investment and tourism after the 2011 uprising drained the Central Bank’s foreign reserves.

Foreign currency flows have gradually been boosted in recent months after the government signed late last year a $12 billion, three-year loan program with the International Monetary Fund. The program calls for aggressive economic reforms, including energy price increases and the introduction of a value-added tax.

The country had roughly $36 billion in reserves before the 2011 revolution scared away tourists and foreign investors, both of which were key sources of hard currency.

Maj. Gen. Yehia Kedwany, a member of the Defense and National Security Committee, told Egyptian news site Parlmany that the residency-for-deposits system is followed in several countries around the world, including the United States, the United Kingdom and Germany.

He said that not all foreigners residing in Egypt will get citizenship, as security bodies and the Cabinet might determine that the applicant is not eligible based on information and monitoring of his or her actions during the period of residency in the country.

Kedwany added that revenues from applying this law would reach $10 billion shortly, as the number of foreigners residing in Egypt stands at 4-5 million. “That is a huge amount of hard currency that can significantly benefit the state’s economy,” he noted.

Economists say that the new law would remarkably bolster the government’s efforts to increase the availability of hard currency in the market and prop up the national economy.

“The move comes at the perfect time,” said economist Ahmed el-Shami. Shami described the move as excellent, saying that the country is in dire need of such ideas amid hard economic times.

However, he emphasized the importance of scrutinizing the applications submitted by foreigners to get citizenship, saying that security bodies should track down all of their activities in the country during the period of their residency in order to avoid any harm to national security.