Is Egypt’s military about to conquer Red Sea tourism?

President Abdel Fattah al-Sisi recently issued presidential decrees transferring control over Red Sea and Sinai lands to the armed forces, a move that many believe will negatively effect local companies in the tourism sector and bring additional riches to the military. 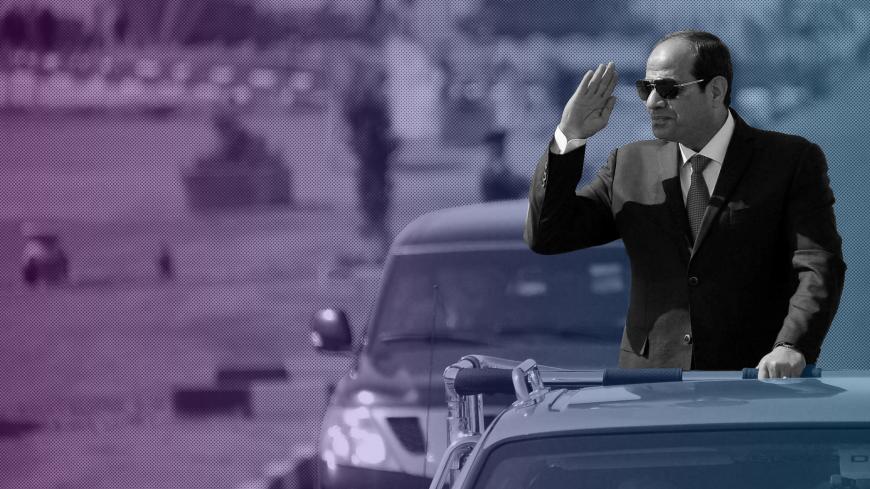 Having conquered numerous industrial sectors of the Egyptian economy, the Egyptian Armed Forces increasingly has its sights set on Egypt's all-important tourism industry. President Abdel Fattah al-Sisi, by decree, recently transferred control of chunks of Red Sea real estate — including entire islands and towns — to the nation's military. With these transfers, Red Sea residents fear losing their livelihoods to the investment priorities of the military, an economic behemoth that will now control the development of the transferred properties, prime land in one of Egypt's leisure and tourism hotspots.

According to data collected by CEIC, a London-based economic consulting firm, Egypt's total tourism revenue for 2018 totaled some $12 billion. That is a 50% increase over 2017 revenue, which stood around $7 billion. In addition, the Central Bank of Egypt reported that tourism revenue was up 36.7%, to $5.4 billion, for the first half of this fiscal year compared to the same period for the last fiscal year. The most recent annual report by the Cabinet indicated that for 2018 the Ministry of Tourism itself collected $9.8 billion from entry fees to museums and monuments and peripheral sales and other ticketing.

On Aug. 5, Egyptian President Abdel Fattah al-Sisi issued presidential decree no. 380 (2019) to transfer control of 47 state-owned islands in the Red Sea to the Egyptian armed forces, declaring them “strategic lands of military importance.” The decree, of which Al-Monitor secured a copy, notes that the islands are tourist destinations, offering snorkeling and safaris. The day before, Sisi had issued another presidential decree, no. 378 (2019), transferring 16,000 feddans in Zafarana to the armed forces along with 45,000 and 14,000 feddans in Gamsha Bay, north of Hurghada. All the plots had previously been under the purview of civil ministries, including the Ministries of Tourism and the Environment, and are situated on the Red Sea. Earlier this month, Al-Monitor reported on a presidential decree issued in July transferring authority over the Port of el-Arish and surrounding residential areas in the capital of northern Sinai governorate to the armed forces.

Hurghada and el-Gouna are the most notable leisure and tourist destinations on the Red Sea, but it appears they will soon have competition. The military is currently working on El-Jalala, a megaproject in Ain Sukhna overlooking the Red Sea near the Suez Canal that is said to include the biggest tourist resort in Egypt. The fates of Gamsha Bay and Zafaran are all but set that they will be developed for the enjoyment of tourists in search of leisure.

The latest land transfers, a member of the tourism chamber of the Federation of Egyptian Chambers of Commerce said, “raise fears about the future of civilian-owned companies operating in this area.” “There are companies that have actually been affected by the National Service Products Organization [NSPO] joining other economic sectors,” he noted, speaking to Al-Monitor on condition of anonymity. “Now, it appears to be the tourism sector’s turn.”

The military, acting through the NSPO — created in 1979 to help the military become relatively self-sufficient and in the process promote industrial development and growth — and similar entities, formed various companies to participate in such sectors as steel production, construction and even health care. Due to built-in advantages, among them being selected as contractors for megaprojects, the military developed into a massive economic actor, often at the expense of smaller private-sector enterprises. The land transfers are an example of these advantages. The military will either open its own company to oversee economic development of the islands and other land or contract development to private companies and collect part of the profits they earn.

The source asserted, “Dozens of small businesses that organize diving and safari activities for Egyptians and tourists alike will more likely incur losses due to the decree transferring ownership of 47 islands to the armed forces. This is because these tourist companies will either have to halt tours or the provision of tourist services after the army is handed supervision over the islands or will continue to operate as subcontractors under the army’s supervision, after paying the latter a particular sum in exchange for continuing to carry on with their businesses.” The latter arrangement is not set out in the presidential decree on the land transfer, but is expected to become the reality.

Usama Sayyad, a researcher on military economy who spoke to Al-Monitor from his residence in Turkey, said that Sisi is obviously granting the armed forces increasing control over of state-owned land to help boost investments that generate billions of dollars for the military, and he is doing so without taking into account the impact this will have on civilians-owned companies.

Under law no. 96 (2015), amending Egypt’s tax code, profits from the projects and services developed by the armed forces and NSPO are exempt from taxes. The military is the only body afforded this benefit and it is allowed to keep the profits for its own budget. Only a parliamentary defense committee is privy to the military's budget.

An official at the Ministry of Environment who requested anonymity because he is not authorized to talk to the media, confirmed that when the 47 islands were under the authority of his ministry, any profits made from their use, including for tourism, went into the state treasury. “So far, there has not been official talk between the ministries of defense and environment on the fate of said tourism profits and revenues of the islands,” he told Al-Monitor.