With tourism in decline, Egypt hopes to repurpose former hotspot

An Egyptian member of parliament has completed a study on the establishment of a free trade zone in the tourist city of Sharm el-Sheikh, which many criticized for its potentially harmful effects on tourism. 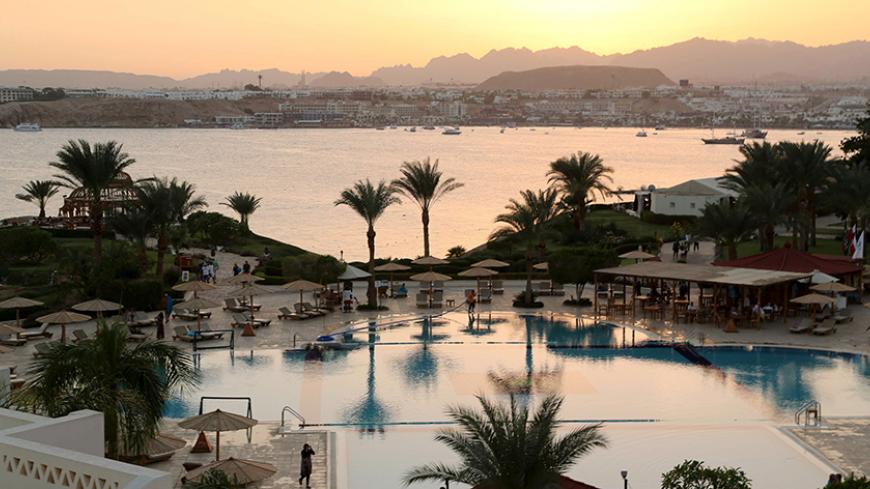 A general view of Naama Bay and a hotel swimming pool at sunset in the Red Sea resort town of Sharm el-Sheikh, Egypt, Nov. 7, 2015. - REUTERS/Asmaa Waguih

CAIRO — While Egypt’s tourism industry faces troubled times, one lawmaker is thinking of innovative ways to bring in revenue to some of the country’s top destinations. Parliamentarian Mohamed al-Massoud announced July 26 that he had completed a monumental and wide-reaching study on the establishment of a free trade zone in Sharm el-Sheikh. The study, he said, was conducted in accordance with the new law on foreign and local investments, which was issued June 1.

Massoud, a member of parliament's tourism committee, said he would submit his study to the government and Minister of Investment Sahar Nasr, who decides whether cities can become free trade zones.

Sharm el-Sheikh is among the most beautiful tourist attractions in the world, located along the Red Sea, at the point where the Gulf of Suez meets the Gulf of Aqaba. It was ranked the fourth-most beautiful city in the world in 2005 by the BBC and further won the UNESCO Cities for Peace Prize for 2000-2001, along with four other cities.

Massoud told Al-Monitor that his choice of Sharm el-Sheikh was based on a scientific study that took into consideration its unique location, international airport, top-notch road network and potential to accommodate a port. “The nature of Sharm el-Sheikh as a coastline surrounded by mountains helps guard against smuggling goods into the local market without customs supervision, which, eventually, helps national industries,” Massoud said.

Massoud further added that a free trade zone would attract substantial capital to Egypt that would help secure hard currency and create over a million jobs, directly and indirectly. The zone would reduce unemployment and even indigenize technology without causing any damage to tourism.

The free trade zone "will start from Sharm el-Sheikh’s el-Nour district up to el-Tor in the northwest, which is a 110-kilometer [68-mile] unpopulated coastline," Massoud said. "The loading and unloading docks will be established in this area, far from tourist attractions. The area will enjoy complete independence, as special laws that encourage investment would be applied. This will help eliminate the bureaucracy, which has discouraged potential investors in Egypt for too long.”

Massoud called opponents of the free trade zone “enemies of success,” and he finds it strange that tourism is being used as a pretext to oppose the measure.

“Dubai has achieved tourism growth despite the hot weather all year long, while Sharm el-Sheikh enjoys a moderate climate in all seasons of the year. Can’t they see that?” Massoud said.

Amro al-Gohary, the undersecretary of parliament's economic affairs committee, told Al-Monitor, “Sharm el-Sheikh was established as a city to be a global tourist attraction. Establishing a free trade zone in Sharm el-Sheikh would cause grave harm to it. For instance, you cannot establish a free trade zone without a port with loading and unloading docks, and constructing a port there means destroying beaches and coral reefs. This would mean undermining the city’s most important pillars, which are beach tourism and diving.”

According to Gohary, industrial zones pollute the environment, and shipping vehicles and trucks roaming the city would cause further noise pollution. Such pollution would undermine the city's fundamentally private and quiet nature. Egypt could stand to lose billions of dollars invested in the tourism sector if a free trade zone were established.

“There are several cities on the Red Sea shores that could serve the same purpose," Gohary said. "For instance, Hurghada is bound by the Port of Safaga to the south and the Port of Ain Sokhna to the north, with a population of nearly 90,000 people and the residential units all over the city, unlike Sharm el-Sheikh, which is full of hotels and spas but lacks housing units. Pending finance by the World Bank, a high-speed train would be established between Cairo and Hurghada and between Hurghada and Luxor [according to a decree issued in 2014 by former Minister of Transport Ibrahim El Demiry]. The train is expected to facilitate transportation of raw material and workforce.”

The Egyptian government approved in January a project to establish a free trade zone in the Golden Triangle. This eastern desert area stretches over a surface of 2.2 million feddan (385 million square meters). The project would include industrial, mining, touristic, agricultural and commercial zones.

Gohary said he is a patron of free trade zones and that he submitted a proposal for establishing a seaport and a free trade zone in Halayeb and Shalateen three years ago to attract investors and help establish the area as a window to Africa. But he has yet to receive a response regarding the project.

“Compared to Dubai, Egypt is distinguished in everything — its geographic location, employment and weather — but it lacks components that Dubai has," Gohary said. "These include the legislative structure, advanced logistics, infrastructure and advanced government services such as the activated e-government and m-government, as well as customs and tax exemptions, not to mention foreigners’ ability to own some projects outside the free zones and to transfer 100% of the profits.”

Gen. Hassan el-Sayyed, a member of parliament’s economic committee, told Al-Monitor, “[Former] President Hosni Mubarak had often refused the idea of constructing a bridge connecting Tabuk in Saudi Arabia to Sharm el-Sheikh in Egypt so as to preserve the city and the independence it enjoys. The presence of trucks full of goods and vehicles carrying passengers would intimidate the privacy of the city and make it even harder to secure, not to mention a free trade zone and other industrial zones.”

Ammary Abdul Azeem, the former head of Egypt’s Federation of Tourism Chambers, told Al-Monitor, “A free trade zone on the outskirts of Sharm el-Sheikh would help develop the city and attract more visitors. The city was negatively affected since the January 25 Revolution and the bombing of the Russian plane in 2015, which cost the city dearly to the extent that some restaurants and cafes have left Sharm el-Sheikh indefinitely after they incurred great losses.”

Abdul Azeem said that having shopping centers in Sharm el-Sheikh would attract foreign investors who are interested in tourism. This would economically benefit the whole city and help it regain its position as a key attraction on the world tourist map.