At a time when Egypt’s tourism sector has suffered a setback due to the war in Ukraine, the first direct flight from Israel is set to land in Sharm el-Sheikh this month, which may boost the number of Israeli tourists in the Egyptian coastal resorts in the Sinai Peninsula. 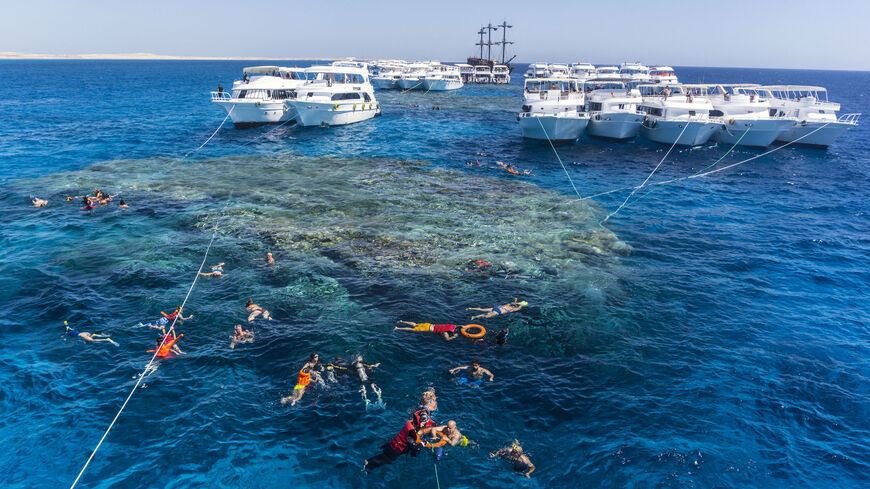 Egypt is currently looking for alternative tourist markets as part of a government plan to increase the number of tourists in a bid to save the vital sector that has been affected by Russia's war on Ukraine.

The war halted the flow of tourists from the two countries, which makes up a third of the total number of tourists in Egypt annually, pointing to a real crisis in the tourism sector.

Tourism accounts for nearly 12% of Egypt's gross domestic product and is one of the main sources of foreign currency in a country whose economy is already under pressure amid unprecedented inflation.

Meanwhile, Egypt and Israel agreed last month to operate direct flights between Tel Aviv and Sharm el-Sheikh in the south of the Sinai Peninsula where Egypt’s top resorts overlook the Red Sea.

While Israeli Prime Minister Naftali Bennett’s office indicated that direct flights are expected to begin this April, the Egyptian Ministry of Civil Aviation has not made any official announcement in this regard.

According to Israel, the two countries reached an agreement when an Israeli delegation led by the Shin Bet visited Egypt in September 2021 to discuss with the Egyptian side the safety and security of the new flight route.

Egyptian authorities completed in 2021 the construction of a 36-kilometer concrete and wire wall around the Sharm el-Sheikh resort. The project, which was announced in 2019, aims to tighten security measures at the popular coastal attraction in a bid to attract tourists.

Egyptian President Abdel Fattah al-Sisi and Bennett announced the opening of a flight route during the first official visit by an Israeli prime minister to Egypt in Sharm el-Sheikh in September 2021.

Tel Aviv believes that increasing the number of flights between the two countries would further warm relations. EgyptAir, the state-owned carrier of Egypt, currently operates direct flights between Tel Aviv and Cairo.

Egypt is the first Arab country to have signed a peace agreement with the Jewish state in 1979 before the two countries started operating direct flights. EgyptAir is the parent company of Air Sinai, which operated flights between the two countries without carrying the Egyptian flag or the company's logo.

Since Sisi took office in 2014, he has been keen to strengthen diplomatic and security relations with Israel, which have reached unprecedented levels today.

Israir Airlines indicated last month that it intends to operate 15 weekly flights on the Tel Aviv-Sharm el-Sheikh route as soon as it obtains the necessary approvals.

Paul Rivlin, a visiting professor of economics in the Middle East at Emory University, told Al-Monitor that the direct flights between the two countries have considerable potential to revitalize Israeli tourism to Sharm el-Sheikh and will help Egypt overcome some of the effects of the Russian war in Ukraine.

The sea resorts in Sinai are the most attractive destinations for Israeli tourists. More than 700,000 Israeli tourists visited Egypt in 2019, according to the Israeli Embassy in Egypt.

Egyptian tourism experts who spoke to Al-Monitor believe that the operation of direct flights between Egypt and Israel will increase the number of tourists coming to Egypt, but it will not be enough to compensate for the accumulated losses the tourism sector has incurred over the years.

Egypt’s tourism revenues hit $2.8 billion from July to September 2021, according to the country’s central bank, compared to $801 million for the same period in the previous fiscal year.

Egypt had hoped for a better tourism season this year with most of the world countries easing COVID-19 restrictions. However, the Russian war in Ukraine has further burdened tourism, which is a key source of national revenues in Egypt.

Egypt was one of the first countries to begin receiving tourists in July 2020 while strict precautionary measures to stem the spread of the coronavirus were still in place globally, in a desperate attempt to save its ailing sector. Tourism revenues decreased by 70% in the same year due to the pandemic and the ensuing closure of many tourism facilities and hotels, and travel and movement restrictions that affected most of the world's countries.

Magdy Sleem, a former official at the Egyptian Ministry of Tourism, told Al-Monitor that direct flights between Egypt and Israel may promote Israeli tourism in the country with time, but he also called for the need to target other markets in Europe, East Asia and Latin American countries.

He added that Israeli tourism alone will not compensate for the Egyptian losses incurred due to the war in Ukraine and the pandemic. “We will seemingly see the lowest number of tourists visiting Egypt in years,” he said.

Egypt launched last month the Follow the Sun advertising campaign on social media, including Facebook, TikTok and Instagram, to attract tourists from the United Kingdom, Germany, Italy, France and the United States, in an attempt to bridge the gap that the Russian and Ukrainian tourists left behind due to the war.

Moreover, the Cabinet decided on March 22 that charter flights landing in Egypt would continue to receive cash subsidies from the government until the end of October. These sums range from $1,500 to $3,500 to airlines per flight. The program, which aims to boost tourism, was supposed to end in April.

Sleem anticipated that less than 2 million tourists would visit Egypt this year, which implies a 50% decrease compared to 2020.

Expectations of a weak tourist season this year may change after the major Russian tourism company, Biblio-Globus, resumed its flights to Egypt, where 300 Russian tourists arrived in Hurghada on April 3 — the first such trip since the Russian war began in Ukraine.

It is expected that Russian companies will increase their flights to Egypt, coinciding with the decision of authorities in Moscow to lift coronavirus restrictions on regular and charter flights to 52 “friendly” countries, including Egypt, starting April 9, Russian news agency TASS reported Prime Minister Mikhail Mishustin as saying.

Red Wings is offering two flights a week to Hurghada from April 3-10. Beginning April 13, the flight operator will offer four flights a week.

In 2019, the second-largest number of tourists visiting Egypt came from Ukraine with 1.6 million people, namely a 32% increase compared with the previous year.

More than 727,000 Ukrainian tourists entered Egypt in 2020, according to the Ukrainian Embassy in Cairo, which comprised 21% of the total number of foreign tourists in Egypt that year.

The Ukrainian State Agency for Tourism said in a January report that 1.46 million Ukrainians visited Egypt in 2021, making Egypt its second most popular tourist destination after Turkey.

Russia has been the first source of tourists in Egypt for years, with nearly 3 million Russian tourists visiting Egypt in 2014, before Moscow ordered a suspension of flights to Egypt after a Russian charter flight crashed in Sinai in 2015 killing all 224 passengers on board.

In July 2021, Russia decided to resume flights to and from Egypt. Since then, 700,000 Russians visited Egypt until the end of 2021, with 125,000 Russian tourists entering the country in the first two weeks of 2022, according to Russian Ambassador to Cairo Georgy Borisenko.

Sleem said that the repercussions of the war in Ukraine will cast a shadow on tourism in Egypt for a while, which will affect the 2 million people working in the sector.