The crisis between Russia and Ukraine has cast a shadow on tourism in Egypt, which relies heavily on beach visitors from the two nations. 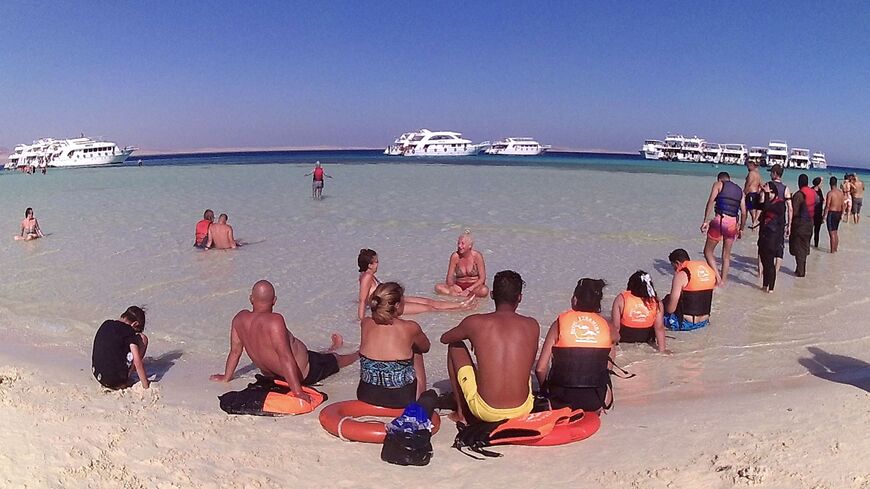 Russian tourists relax on the beach in the Egyptian Red Sea resort of Sharm el-Sheikh on Sept. 29, 2021. - KHALED DESOUKI/AFP via Getty Images

CAIRO — The crisis between Russia and Ukraine, with Moscow’s invasion on Feb. 24, has cast a shadow on the tourism sector in Egypt, which relies heavily on visitors from the two nations.

There has been a reported 30% decrease in tourism bookings from Russians and Ukrainians so far in February — even before the invasion, as tensions built while Russia amassed troops along the Ukrainian border.

Although, like other nations, Egypt saw a massive drop in tourist numbers throughout the COVID-19 pandemic, there were hopes for a revival as restrictions eased and flights from Russia resumed. The Red Sea coast has long been a popular tourist destination for Russians, but after a 2015 attack by the Islamic State's Sinai branch downed a Russian airliner headed from Sharm al-Sheikh to St. Petersburg, killing 224 people, Moscow suspended flights to Egypt. The ban was finally lifted last July, and Russia resumed its direct commercial flights to the cities of Hurghada and Sharm el-Sheik in August. Government officials had predicted numbers to rise to 300,000-400,000 Russian tourists per month.

Egyptian Prime Minister Mostafa Madbouly said in a statement Feb. 23 that the Egyptian “government is currently studying the repercussions of the Russian-Ukrainian crisis from various aspects,” without further elaboration.

There are no Egyptian statistics for the number of Ukrainian tourists in 2021, but the Ukrainian State Agency for Tourism said in a report on Jan. 25 that 1.46 million Ukrainians visited Egypt during the past year, making Egypt its second most popular tourism destination after Turkey.

Peter Nathan, a member of the Board of Directors of the state-owned Egyptian Hotels Association and the owner of Xperience Sea Breeze Resort, a hotel chain in Sharm al-Sheikh, told Al-Monitor, “There is a 30% decrease in the number of tourists coming from Russia and Ukraine to the Red Sea area."

Tourists from Russia and Ukraine are the main visitors to the Red Sea area, and "there is undoubtedly an impact on the number of inbound tourists at the present time,” Nathan added.

Numbers had already dropped in February as a result of the political crisis, he said, although the rates of tourism in the last quarter of 2021 were "very encouraging.”

Meanwhile, Elhamy el-Zayat, the former head of the Egyptian Tourism Federation and the agent of Ukraine International Airlines in Egypt, told Al-Monitor, “The Ukrainian airlines informed us that they will permanently suspend flights to Egypt this month, without specifying a date for the resumption of flights, as a result of tensions with Russia.”

Egyptian tourism companies are counting on England and Germany to make up the shortfall, he said.

On Feb. 25, Egypt's Tourism and Antiquities Ministry announced that any Ukrainian tourists stranded in the country due to the current crisis could remain until it was safe to return.

Noura Ali, the chairperson of the Egyptian parliament’s Tourism and Aviation Committee, confirmed to Al-Monitor that there had been a 25-30% drop in bookings from Ukraine in February.

According to a statement by the Egyptian Ministry of Tourism and Antiquities in September 2021, “Ukrainians came in second place, after Germans, in terms of numbers of inbound tourists to Egypt before the coronavirus pandemic.”

Egypt’s Minister of Tourism and Antiquities Khaled al-Anany said last June, “Ukraine was one of the first countries whose tourists came to Egypt since the resumption of the inbound tourist movement in July 2020, with the largest tourists visiting Egyptian landmarks.”

Ukrainians represent about 30% of the total tourists in the Red Sea, Ali said, but tourism in general declined because of COVID, and now "the numbers of tourists from Ukraine and Russia has plummeted even more.”

In 2019, 13.1 million tourists visited Egypt, which generated revenues of $13.03 billion. But with the coronavirus pandemic in 2020, tourism revenues fell by about 70% to $4 billion, with tourists numbering 3.5 million, according by Reuters.

Meanwhile, the Egyptian Masrawy website reported on Feb. 22 that the year “2021 witnessed a remarkable recovery in the tourism sector, with the reopening of businesses and resumption of flights, as well as direct flights from Russia to tourist resorts in Egypt.”

Ahmad Tariq, an accountant at a resort hotel in Sharm el-Sheikh, told Al-Monitor, “Tourist reservations and bookings have indeed plummeted over the past weeks, especially starting mid-January, with fewer inbound tourists coming from Ukraine and Russia.”

He expressed fears that the Ukrainian crisis could “affect the work of those working in the tourist sector.”