Egypt looks for upsurge in tourists from sanctions-hit Russia 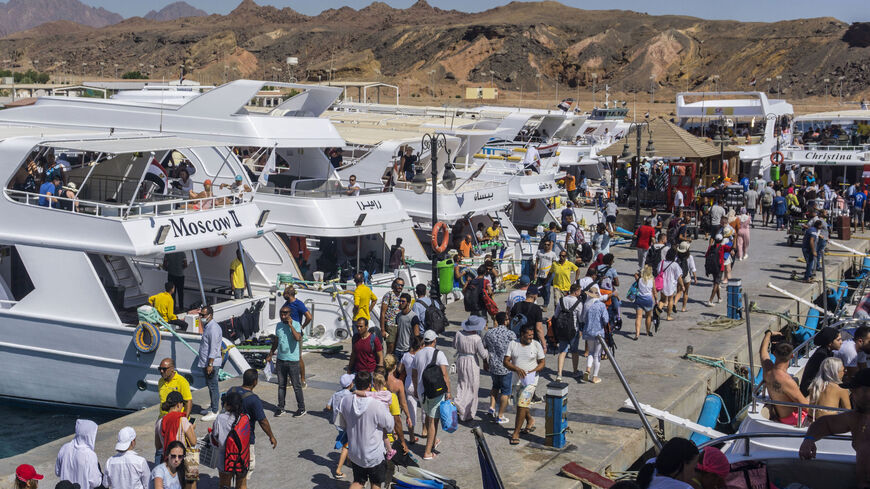 The Egyptian tourism sector looks to rebound from the impact of the Ukraine war amid talks between Egypt and Russia to apply the Russian payment system MIR in Egyptian resorts.

On June 8, head of the Russian Agency for Tourism (Rostourism) Zarina Doguzova held talks with Egyptian Minister of Tourism and Antiquities Khaled El-Anany to discuss increasing the number of flights between Russia and Egypt.

Discussions between the two sides also dwelt on the possibility of using MIR cards by Russian tourists at Egypt’s Red Sea resorts.

“Egypt is one of the most preferred tourist destinations for Russians to spend their vacations,” Doguzova said in a post on her Telegram channel.

Tourists from Russia and Ukraine make up around 40% of beach holidaymakers in Egypt, according to figures from the Ministry of Tourism and the Egyptian Chamber of Tourist Establishments.

But tourist inflow from the two European countries was badly affected by the Ukraine war that erupted in February, putting new burdens on the tourism industry, which forms an important source of foreign currency for Egypt. Tourism revenue usually accounts for up to 15% of Egypt’s gross domestic product.

According to workers in the tourism sector, hotel occupancy rates in Egypt’s Red Sea resorts dropped by 35-40% due to the Ukraine war.

Western sanctions on Russia over its invasion of Ukraine further complicated the woes within the Egyptian tourism industry, as Moscow was blocked from US payment card firms Visa and Mastercard.

The penalties have forced many Russian tourists to skip Egypt for vacation and travel to other destinations where their homegrown payment system MIR is used, such as Turkey.

Tourism specialists believe that the application of the MIR system in Egypt’s Red Sea resorts will help boost tourism inflow from Russia.

“No worker in the Egyptian tourism sector opposes the use of the MIR payment system in Egyptian resorts,” Zayat told Al-Monitor over the phone. “Both countries can create a payment mechanism under which Russian tourists can pay in rubles for their expenses and hotels and tour operators collect their money in Egyptian pounds,” he added.

According to data from travel insights company ForwardKeys, the number of Russian tourists in Egypt is forecast to rise by 30% between July 1 and August 31.

“From a tourism perspective, Turkey, the UAE and Egypt have benefited from the invasion of Ukraine as Russians are still welcome there, while other favorite destinations, having imposed sanctions, are effectively off-limits,” said ForwardKeys vice president Olivier Ponti.

Ticket bookings data from the travel company show a 96% increase in the number of Russian tourists in Turkey between June 1 and August 31 and an 84% increase in the UAE during the same period.

MIR was created by Russia in 2014 over fears of Western sanctions on Russian banks and businesses over its annexation of Crimea. The MIR system is applied in 10 countries: Turkey, Vietnam, Armenia, Uzbekistan, Belarus, Kazakhstan, Kyrgyzstan, Tajikistan, South Ossetia and Abkhazia.

Olga Skorobogatova, first deputy chairperson of the Bank of Russia, said July 17 that four other countries will soon apply the MIR payment system as well, but she did not name these countries.

Tarek Rauf, CEO of the Egyptian Banking Company (EBC) — the operator of a payment led by the central bank — confirmed that Egypt will allow the use of MIR cards in its Red Sea resorts in the coming weeks.

Rauf told an economic forum in St. Petersburg, Russia, that the EBC is currently working with the Russian National Payment Card System to launch a mechanism to accept MIR cards. “Russian tourists are very important for us, for Egypt,” Rauf added.

Tamer Saeed, former deputy manager of TEZ TOUR Egypt, also said the MIR cards are expected to be used by Russian tourists in Egypt by September.

According to Russian tour bookings agency Travelata, Egypt was among the top five tourist destinations for Russian tourists in the summer of 2022. Egypt came in fourth place with 4% of Russian tourist inflow after Russian resorts (55%), Turkey (33%) and Abkhazia (7%).

Zayat said Egypt has been seeking to draw in tourists from other European destinations to help fill in the gap in tourist inflow caused by the Ukraine war.

“We are working to attract tourists from the Polish, Serbian and Czech markets. Although these markets will not replace the Russians or Ukrainians, they will help the tourism sector to recover,” he added.

In July 2021, Russia lifted a six-year ban on charter flights to Egypt’s Red Sea resorts following the crash of a Russian passenger plane over the Sinai Peninsula in 2015.

Nearly 1 million Russian tourists visited Egypt in the last four months of 2021 following the resumption of flights to the Red Sea resorts, according to the Russian Agency for Tourism.

In 2021, Egypt generated $13 billion in tourism revenues, returning to the level before the outbreak of COVID-19, according to data from the Tourism Ministry.

The Egyptian government forecasts that tourism revenues will reach between $10-12 billion by the end of the current fiscal year, up from $4.9 billion a year earlier.

Zayat, however, believes that a full recovery of the tourism sector relies on the cessation of hostilities between Russia and Ukraine.

“The tourist inflows from Russia are not expected to fully return to their normal rates at present, but this may happen in the near future. It all depends on halting the war between Russia and Ukraine,” he said.