Russian tourists and companies will be allowed to pay through the Russian Mir system in Egypt ahead of the winter season, which Cairo is hoping will boost its tourism sector. 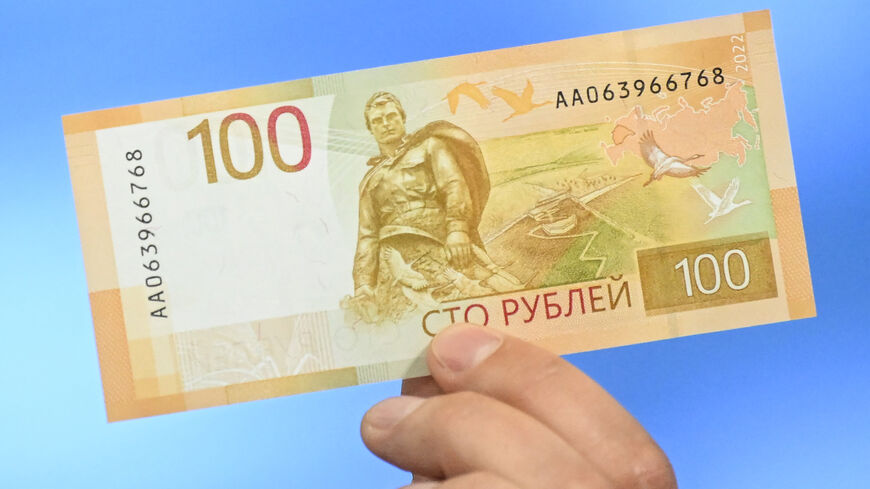 A Russian Central Bank official shows an updated version of 100-ruble banknote during a presentation in Moscow on June 30, 2022. - NATALIA KOLESNIKOVA/AFP via Getty Images

A correspondent in Egypt
September 8, 2022

Starting later this month, the Russian ruble will be on the list of currencies used by Egyptian banks and be used by tourism companies and hotels in a bid to boost Russian tourism in Egypt, an Egyptian Central Bank official told Al-Monitor.

The news comes as the European Union considers banning Russian tourists in response to the Russian invasion of Ukraine.

A source at the Central Bank of Egypt told Al-Monitor on condition of anonymity that the bank, in cooperation with the Egyptian Ministry of Finance, will allow banks across Egypt to access the Russian Mir payment card system later in September. He noted that the decision aims at boosting Russian tourism in Egypt and enhance trade relations between the two countries.

“The decision targets all commercial and industrial activities and not only tourism,” the official added.

Mir is a payment and money transfer system operated by the Russian National Payment Card System. Russia developed the Mir system to evade sanctions imposed on its ability to transfer funds abroad after its occupation of the Crimean Peninsula in 2014.

Many countries, including Bahrain and Iran, are currently seeking to join the Mir system to facilitate financial and commercial transfers with Russia.

Asked about the timing of the decision, the official stated that the government made the move in anticipation of the next winter tourism season as the EU tightened measures against Russian tourists’ entry to Europe.

Ehab Wahdan, director of Tez Tour Egypt, a tourism company that mainly targets tourists from Russia and Ukraine, told Al-Monitor, “I expect a surge in the number of Russian tourists coming to Egypt during the upcoming winter season, especially considering that they do not have many options when it comes to travel destinations, and facilitating payment in rubles will contribute to this surge.”

He stressed the importance of enabling Russian companies and travel agencies to book reservations and trips in rubles.

On Aug. 31, the EU countries agreed to freeze all mutual visa agreements with Russia, except for some special cases.

Speaking at the St. Petersburg International Economic Forum held in June, Tarek Raouf, head of the Egyptian Banks Company, said that Egypt is working to solve financial difficulties and circumvent the sanctions that prevented Russian tourists from using Visa and MasterCard abroad after these companies suspended operations in Russia in March.

Raouf added that Egypt is working closely with the Russian National Payment Card System to have its cards used in Egypt.

The number of Russian tourists coming to Egypt jumped to 1 million during the last quarter of 2021, following the return of Russian flights to Egyptian resorts on the Red Sea, according to ForwardKeys.

Tourism aside, the source at the Central Bank explained that the decision to use Russian ruble is aimed at achieving economic recovery as part of Egypt’s attempts to diversify its foreign currency sources. The source also stressed that linking Egypt to the Russian payment system will help buy Russian products, especially wheat and fertilizers, in the Russian currency.

The official explained that the ruble can be used to pay part of the value of the products that Egypt imports from Russia, which will ease pressure on the Egyptian cash reserve in dollars.

Rashad Abdo, head of the Egyptian Forum for Economic and Strategic Studies, told Al-Monitor that activating the Russian payment system would be a big economic and commercial gain for Cairo, adding, “Egypt relies on Russia for its fertilizers and most important food products, especially wheat.”

Abdo continued, “Buying Russian wheat without the need to spend more dollars will alleviate pressure on the foreign exchange reserves given the erosion of the cash reserves and Egypt’s need for a new loan from the International Monetary Fund.”

Egypt imports 70% of its wheat needs from Russia, according to data from the Central Agency for Public Mobilization and Statistics, which indicated that during 2021, Egypt imported 4.2 million tons of Russian wheat.