Acceptance of MIR bank cards would have eased Russian tourists’ payments inside Egyptian hotels and resorts. 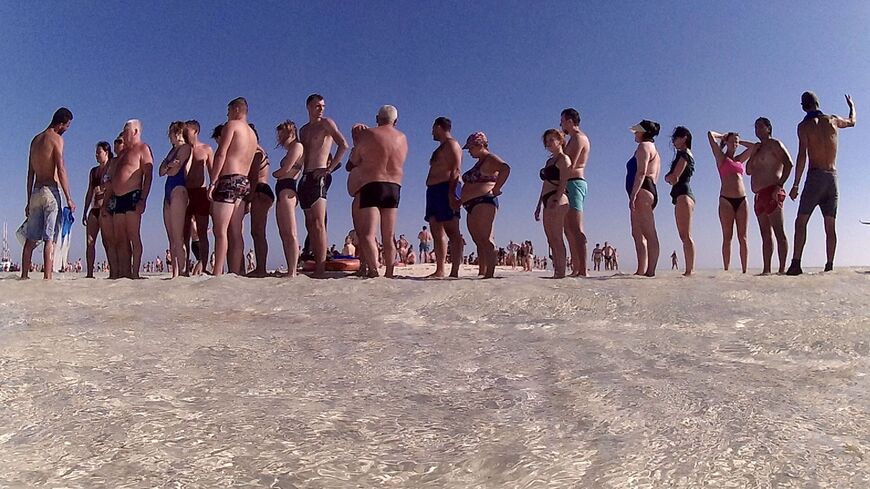 A picture taken on Sept. 29, 2021 shows Russian tourists at the White Island near Ras Mohammed island, in the Egyptian Red Sea resort of Sharm el-Sheikh. - KHALED DESOUKI/AFP via Getty Images

Egypt has shelved plans to apply the Russian MIR payment card system in its resorts and hotels amid worries of possible US sanctions, according to a source at Egypt's largest state-owned bank.

“Sanctions imposed on Russia by the US and European allies have forced the Egyptian decision-makers to scrap their support for the MIR system,” the source from the National Bank of Egypt told Al-Monitor.

The source, who spoke on condition on anonymity, said a recent rise in tourist flows into Egypt have encouraged Egyptian officials to reverse plans to link the MIR scheme with Egypt’s homegrown Meeza card system.

Another banking source told the local Masrawy news portal last month that Egypt was also worried that using the Russian payment system could undermine its current negotiations with the IMF for a loan to shore up its economy amid a severe shortage of foreign currency. With over a 16% voting share, the US is the largest single voting bloc in the IMF.

Egypt’s central bank had originally planned to apply the MIR system in September, but the plans had been suspended after several Turkish banks exited the Russian system due to a US threat of sanctions. The US Treasury warned that banks dealing with the MIR payments risk supporting Russia’s efforts to evade Western sanctions over its Ukraine war. Penalties could include being banned from using US dollars.

MIR is a payment scheme that operates independently of the Western financial system, allowing countries to transact with Russian banks outside the SWIFT interbank payments system and letting Russian citizens make digital transactions.

Egypt’s acceptance of the MIR cards would allow Russian tourists to pay in rubles and access ATMs and thus ease their transactions and payments inside Egyptian hotels and resorts.

Egypt is among the top five tourist destinations for Russian tourists. Russians and Ukrainians account for 40% of holidaymakers in Egypt, but their numbers have drastically dropped since the Russian invasion of Ukraine in February.

Tourism is one of Egypt’s major foreign currency earners. Egypt generated $13 billion in tourism revenues in 2021.

Fakhri El-Fiqi, head of the House of Representatives’ Budget and Planning Committee, said Egypt’s central bank had been working for the past six months to link MIR with Egypt’s homegrown Meeza network. That would boost Russian tourism, he said, and "would also help Egypt pay for Russian commodities like wheat in rubles rather than US dollars.”

Medhat Nafie, an economist, thinks that using the ruble would give Egypt an advantage, since Cairo is a major importer of Russian wheat. “But the possibility of facing US sanctions would prevent Egyptian banks from moving towards adopting the Russian MIR system to boost tourism,” he told Al-Monitor.

According to state statistics agency CAPMAS, Egypt has posted an 85.4% increase in the number of tourists this year, with 4.9 million visiting the country in the first half of 2022, compared to 2.6 million last year.