Is Sisi selling Egypt to Saudis? 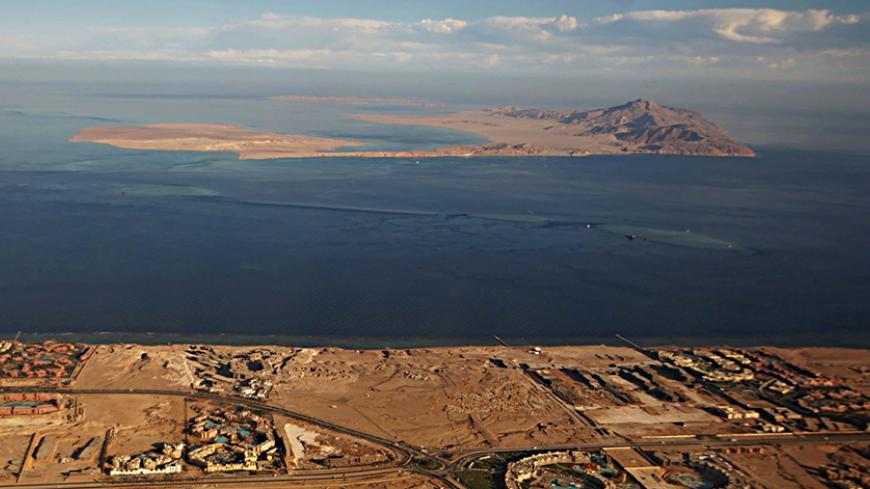 A picture taken through the window of an airplane shows the Red Sea's Tiran (foreground) and Sanafir (background) islands in the Strait of Tiran between Egypt's Sinai Peninsula and Saudi Arabia, Jan. 14, 2014. - STRINGER/AFP/Getty Images

Yet another controversial move by Egyptian President Abdel Fattah al-Sisi has some citizens fearing a land grab of sorts by Saudi Arabia.

Under the May 26 decision, Saleh will be treated as an Egyptian and allowed to own two parcels of desert land previously owned by Egyptian citizens in Giza. The land is along a highway between Cairo and Alexandria.

Under a 1996 law, non-Egyptians are entitled to own two properties in Egypt, provided those properties are owner-occupied. Also, the area of each property should not exceed 4,000 square meters (1 acre), and the area should not be considered a historical site. Under the new decision, Saleh is no longer confined by these requirements and already owns a 4,400-square-meter property.

In July 2014, the Council of Ministers issued the Real Estate Finance Law allowing foreign companies, even 100% foreign-owned firms, to own lands allocated by the Egyptian government for housing projects.

Fouad Abdel Nabi, a professor of constitutional law at the University of Menoufiya, challenged the constitutionality of the president’s recent decision and said it violates Article 4 of the constitution, which states that sovereignty belongs to the people alone, who shall exercise and protect it. Also, according to Articles 139 and 144, the president does not have the right to make an exception for anyone under the laws and conditions of land ownership, his mission being to defend the interests of the people and not to establish supremacy over them.

Abdel Nabi confirmed that “state resources — and lands, most importantly — belong to the people and not the president.” Sisi's decision allows Egyptian citizens to transfer land ownership to Saudi citizens, but it also keeps the door ajar for certain transactions between foreigners, especially Saudis, Abdel Nabi noted. This violates Article 32 of the constitution, which obliges the state to preserve such resources, prevent their depletion and take into consideration the rights of future generations to them.

The decision should have been submitted to parliament before being issued, according to the law professor, who stressed that the state will not be able to protect state resources from depletion or regulate the conduct of new landowners.

According to a 1981 law, non-Egyptians are not entitled to own agricultural, desert and agricultural reclamation land, but a 1988 law allows the president to treat Arab nationals as Egyptians if the Cabinet approves.

Abdel Nabi said it makes sense for Egyptians to be concerned over foreign ownership of land in strategically important border areas, especially the Sinai Peninsula.

Another professor, however, did not agree with that assessment. Yasser Hudaybi, a constitutional law professor at Ain Shams University, believes the law does not prevent non-Egyptians from owning agricultural lands or housing units or from establishing companies.

The law differentiates between Arabs and non-Arabs for national security reasons, Hudaybi told Al-Monitor. He said he doesn't worry about foreigners owning Egyptian land because the property remains subject to Egyptian sovereignty. The state can confiscate lands for any reason related to national security by compensating the foreign owners appropriately.

The Integrated Development Law of Sinai Peninsula, promulgated in August, prohibits foreign ownership of land and property in Sinai but allows non-Egyptians, and Egyptians with dual nationalities to obtain usufruct right to benefit from built-up units for 50 years, with a maximum of 75 years for owner-occupied property. Also, the law prohibits both Egyptians and foreigners from owning properties in areas of military interest.

The same law, however, enabled the president — upon the approval of the Council of Ministers, the Ministries of Defense and Interior and the General Intelligence Service — to treat foreign Arab nationals like Egyptians as far as owner-occupied property is concerned.

“Egyptians have properties in several countries such as Greece, England and the United States,” Hudaybi said, adding that the Egyptian Constitution, like other constitutions, does not prohibit land ownership to foreigners. He stressed that this decision encourages the presence of foreign investment, which in turn provides job opportunities to Egyptians.

Lawyer Ziad al-Alimi, a former member of Egypt's parliament, said the decision discriminates between Saudis, holders of other nationalities and Egyptians themselves, stressing that the Egyptian state is putting obstacles in the way of Egyptians’ ownership of territories, especially when Sinai Bedouin are involved. Alimi noted that the Security Council claims this is for reasons of national security.

Alimi told Al-Monitor that such decisions set the stage for legal exceptions, which in turn “often pave the way for corruption.”

“Egyptians [legally] have the priority of investing in Egyptian territory,” said Alimi. He added that while the state is being strict with some Egyptian citizens who seek to own land, either for their homes or investment, it is also lax with non-Egyptians, especially Saudis. This confirms that the Egyptian regime is serving foreign interests and making decisions on this basis, he said.

Alimi said it is naive to say that since the territories are Egyptian, the government can confiscate them at any time, since the state could face international fines and have its assets and accounts frozen abroad.

Alimi said the Committee on Human Rights in the 2012 parliament discussed ownership of some Sinai Bedouin lands, and the main objection came from the Ministry of Defense, given the potential threat to national security.

Elias added that the decision gives preference to Saudi citizens over their Egyptian counterparts. He stressed that Egyptian workers in Saudi Arabia still suffer under the sponsorship system.

The ownership law in Saudi Arabia allows legally residing foreigners to own properties for residential purposes upon the approval of the Ministry of Interior. The law also allows foreign investors to buy buildings, or land on which to develop, provided the cost of the project is at least 30 million riyals ($8 million) and the property is sold or rented within five years.

Elias said he expects some Saudi investors to buy desert land on the outskirts of Cairo and major cities, in anticipation of rising property values, to make huge gains. That could lead the Saudis to dominate the Egyptian real estate market.