Looking to invest in Sinai?

The Egyptian government has amended its law on development in the Sinai Peninsula to permit Egyptian investors to own the properties where their projects are carried out. 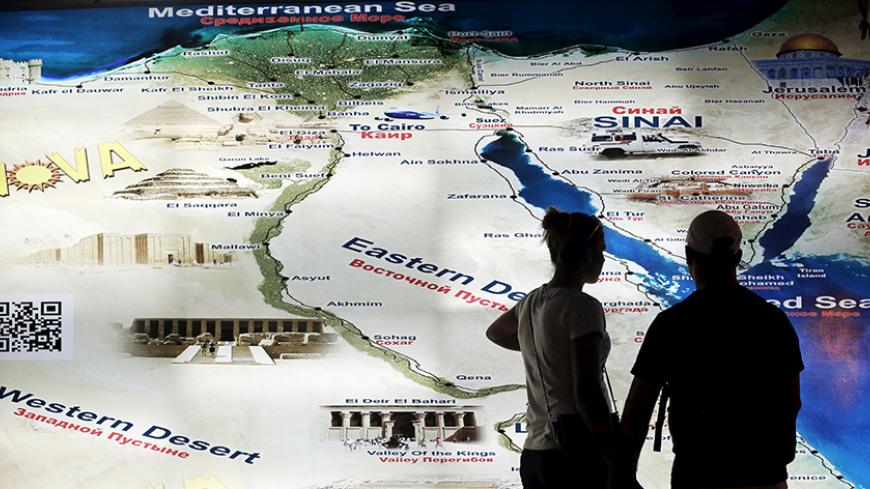 A tourist couple looks at a map of Egypt at the Red Sea resort of Sharm el-Sheikh, which hosted the Arab Summit, in the South Sinai governorate, south of Cairo, March 27, 2015. - REUTERS/Amr Abdallah Dalsh

Some see amendments to property-ownership laws in the Sinai Peninsula as much-needed improvements, but critics see the amendments as not going far enough. It appears the changes could make it easier for Egyptians to own land but not necessarily sell it.

President Abdel Fattah al-Sisi issued Law No. 95 of 2015 amending some restrictions of Law No. 14 of 2012 on the integrated development of Sinai. These amendments have been long awaited by many investors in Sinai, who hope the changes will entitle them to own the land and real estate properties needed for their projects.

Sirajuddin Saad, head of the General Authority for Tourism Development — one of the bodies participating in drafting the amendment — told Al-Monitor, “The amendments to the law were very good, as they enable Egyptians to own lands and real estate properties, which was banned by virtue of Law No. 14/2012. Moreover, the increase of the duration of usufruct to 50 years with a maximum of 75 years, instead of the 30-year usufruct span provided for in Law No. 14/2012, allows investors to reap the profits of their projects.”

Saad stressed that these amendments will promote development in Sinai, noting that numerous tourism development projects awarded by the authority were suspended following the promulgation of Law No. 14/2012. Under this law, project owners were unable to own the land where their projects are established, which would have enabled them to obtain financing from banks.

The Egyptian government started preparing these amendments in March 2015 after several requests by investors who complained that the law discouraged investment.

The Sinai Peninsula is administratively divided into two governorates, North Sinai and South Sinai. It is bound by the Mediterranean Sea on the north with a 220-kilometer (137-mile) shore, and to the south by a line extending from the southern Mitla Pass to Ras an-Naqab. To the east lie the Gaza Strip and Israel, starting at a line from Mitla Pass to the south to Baloza in the north.

In North Sinai, a fierce war is raging between the Egyptian armed forces and armed extremist groups, including Ansar Bayt al-Maqdis, which pledged allegiance to the Islamic State in November 2014 and claimed responsibility for a number of terrorist acts in Sinai and in a number of areas in Egypt.

Ansar Bayt al-Maqdis claimed responsibility for the attack in el-Arish on the morning of March 10 that led to the killing of two Egyptian soldiers, and for the attack on Jan. 30 that killed about 45 civilians and soldiers. The terrorist group was behind another attack against the armed forces July 1, the second anniversary of the ousting of former President Mohammed Morsi.

The South Sinai governorate is one of the most important governorates for tourism. It encompasses Sharm el-Sheikh as well as other popular tourist sites such as Nuweiba, Dahab, Ras Sedr, Saint Catherine's Monastery and Mount Sinai, in addition to the cities of Abu Rudeis and Abu Zenima.

According to Saad, the most important amended article is Article 2, which specifies that the provisions of this law apply to all activities and projects established as of Jan. 19, 2012. Earlier projects and legal commitments remain subject to the laws under which they were established. The government and interested parties have six months from the issuance date of the new law to make the necessary legal arrangements. He said Article 2 is designed to provide stability.

It is noteworthy that the investment contracts concluded in Sinai before 2012 were governed by Law 350 of 2007, which did not prohibit Egyptians or foreigners from owning land there.

For his part, former head of the Egyptian State Council Mohamed Hamid el-Gamal told Al-Monitor, “The amendments made to the Sinai development law have political dimensions. The state aims to increase the development rates in this region to curb the expansion of armed groups there. Therefore, [the state] allowed Egyptian nationals, from the governorate residents or from among Egyptian investors, to own lands in this region.”

One of the governorate residents told Al-Monitor on condition of anonymity, “Law No. 14/2012 deprived the people of Sinai from owning the land of their ancestors. This created a highly sensitive issue between the people of Sinai and the state apparatus. Sinai residents believe that preventing them from owning lands is tantamount to questioning their patriotism.” The amendments are aimed, in part, at alleviating that belief, the source said.

Hisham Jaber, an investor in South Sinai, believes the amendments still represent an obstacle to investors who want to sell their real estate, since they restrict land ownership to Egyptian nationals only.

He told Al-Monitor that the law also states that even if an Egyptian holding dual nationality acquires a building, he shall be prohibited from acquiring the land of his project.

Jaber confirmed that the government’s security concerns arising from acquisitions by non-Egyptian or by dual-nationality Egyptians still exist, given the sensitivity of Sinai, pointing out that this concern limits investors' abilities to develop the Sinai region.

Article 2 of Law No. 95 of 2015 stipulates that if an Egyptian national acquires another nationality, or if any real estate properties in the region revert to an Egyptian who holds another nationality or is born to a non-Egyptian mother or father, by any way other than inheritance, or for any reason of ownership acquisition, after the law goes into effect he must waive the ownership right of the properties and keep the usufruct right as well as the right of ownership of the built constructions without the ownership of the land.