As threats from terrorist groups escalate, Copts in Egypt's North Sinai governorate are fleeing their homes for fear of being killed or kidnapped. 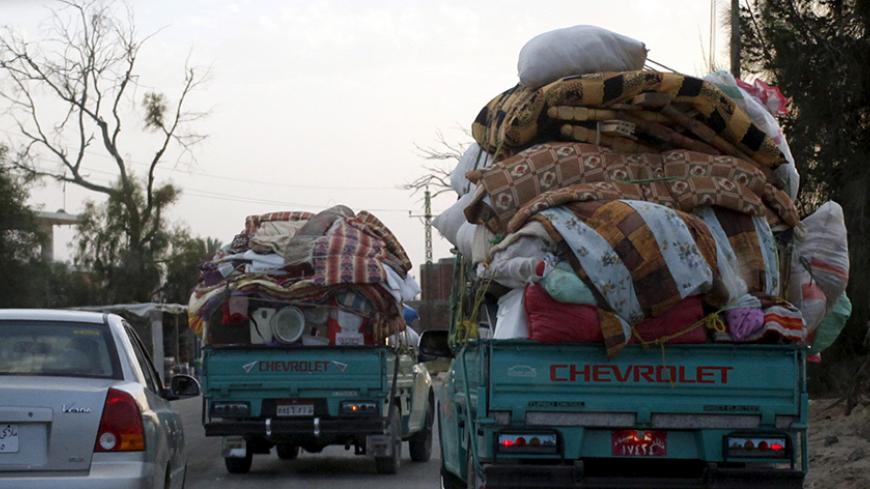 Pickup trucks filled with personal belongings leave the border areas in northern Sinai, where authorities are battling insurgents on the highway between el-Arish and the border town of Rafah, Egypt, May 25, 2015. - REUTERS/Asmaa Waguih

In the North Sinai governorate, battles are raging between the Egyptian army and jihadist groups such as Ansar Bayt al-Maqdis and the Movement for Unity and Jihad. Now, like in other governorates, Copts are being forcibly displaced.

Egypt’s Copts Coalition in North Sinai issued a Feb. 27 statement reporting that 27 Christian families from different parts of the North Sinai governorate — mostly from el-Salam suburb in el-Arish — fled the region in February.

Abanob Gerges, the coordinator of the coalition, told Al-Monitor that the targeting of Copts began following the participation of the patriarch of the Coptic Orthodox Church of Alexandria, Pope Tawadros II, in the statement of the armed forces July 2, 2013, which led to the isolation of former President Mohammed Morsi.

As a result, jihadist groups burned down the St. George Church in el-Arish, following the breakup of the sit-in held by Morsi supporters Aug. 14, 2013, in Rabia al-Adawiya compound. The armed forces arrested a number of those involved in the church’s burning, without stating their political affiliations.

Gerges added that the first assassination of a Copt was the murder of the secretary of Bishop Kosman (Cosmas) of North Sinai, Rev. Mina Aboud, at the hands of armed groups in el-Arish, where he was shot to death July 6, 2013.

On June 16, 2014, Ansar Bayt al-Maqdis also kidnapped four Copts and freed them in exchange for ransom used to purchase arms to fight against the Egyptian army, which was tightening the noose around the organization’s neck, according to Gerges.

In July 2013, the organization kidnapped Coptic trader Magdi Lamhi and asked for a large ransom of 200,000 Egyptian pounds ($26,000) for his release. When the victim’s family failed to come up with the money, he was slaughtered.

Hani Nazir, a Copt who fled the city of el-Arish to Asyut, said that since the June 30 Revolution, Ansar Bayt al-Maqdis has committed a series of assassinations and kidnappings of Copts, most notably the killing of 37-year-old Hani Samir, who owned a shop in el-Arish.

On July 28, 2013, Mina Mitri, the owner of another shop on Asyut Street, was kidnapped but released after his family paid a ransom. There was also the kidnapping of Christian trader Shenouda Riad on March 27, 2014. He paid a ransom of half a million Egyptian pounds ($65,512) for his release. On Feb. 8, 2015, Nabil Mahrous was shot inside his house in front of his family. The police was not able to arrest the killers or determine their identity, but Mahrous’ wife said that they shouted, “We killed you, you infidel,” as they shot him.

Gerges said that in February, 15 masked men stormed into the house of Abdul Shahid Tawfiq, a Copt living in the el-Arish neighborhood of al-Samran. The armed men did not find him as he managed to hide, but they did set his house on fire.

On Feb. 23, 2015, William Michel Farag was also assassinated while opening his knife-sharpening shop at 8 a.m., when three masked men tried to kidnap him. When he attempted to flee, they shot him.

Nazir told Al-Monitor that he decided to leave el-Arish following the kidnappings and killings of Copts, crimes that escalated following the isolation of Morsi.

“I put my house up for sale for a cheap price, as many took advantage of the bad situation and the violent acts against Copts. I left with my family in the middle of the night without telling anyone so as to not get kidnapped and then have to pay the price of the house as a ransom. We traveled to Asyut, where I bought a small plot of land with the help of my brother, who also fled Sinai,” Nazir said.

Nazir added that he had previously left Sinai following the outbreak of the June 30 Revolution and the burning of an el-Arish church Aug. 14, 2013. However, he returned when the situation had become relatively stable. Yet things have deteriorated again with the kidnapping and targeting of Copts, and he decided to leave Sinai for good when the Islamic State slaughtered 12 Copts in Libya on Feb. 15, 2015.

Angry over the airstrikes against IS, jihadist organizations started threatening Copts in Sinai by distributing leaflets demanding they leave.

On April 27, 2015, Ansar Bayt al-Maqdis posted death threats against Copts, quoting its leader Abu Assem al-Masri as saying that attacks against Copts would come because they support President Abdel Fattah al-Sisi’s regime and are not paying tribute to the mujahedeen in the state of Sinai.

Ibrahim did, however, acknowledge that jihadist organizations are targeting Copts, but said they are also attacking the military and the police at a larger scale, in addition to Muslims who are cooperating with the Egyptian military. Ibrahim added that 400 Coptic families currently reside in North Sinai.

“The church is keen on preserving its relations with the state, but things are clear now: Coptic families are fleeing Sinai day after day,” Gerges said about Ibrahim’s statements.