Why is IS targeting Copts in Sinai?

In a change of strategy in the area, Wilayat Sinai, the Islamic State affiliate in Egypt, has stepped up its attacks against Coptic Christians in the Sinai Peninsula, specifically in el-Arish. 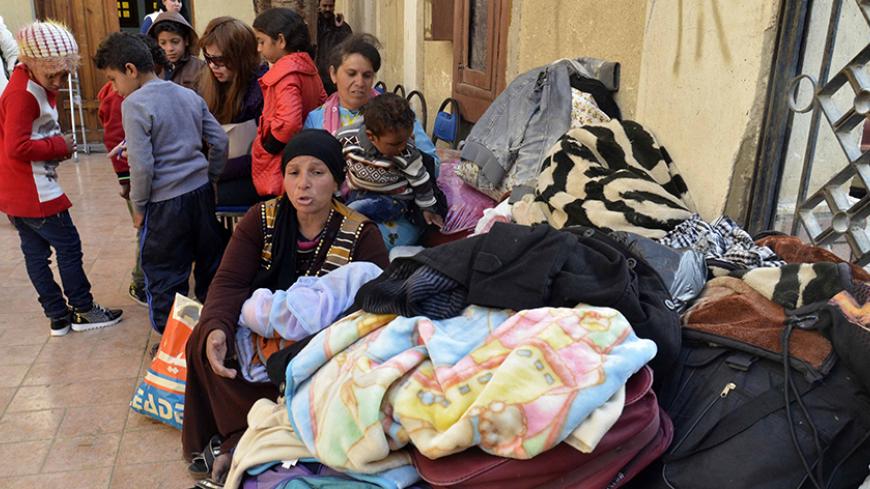 CAIRO — On Feb. 24, hundreds of Christians escaped the city of el-Arish in the northern Sinai Peninsula to Ismailia governorate, 110 kilometers (68 miles) to the east of Cairo, after the Islamic State (IS) and its branch in Egypt, Wilayat Sinai, focused their operations on targeting them. This sparked questions about the change in IS’ strategy in Sinai, thus confusing the Egyptian authorities that were consequently accused of slackening in protecting the Copts.

Between Jan. 30 and Feb. 23, armed men killed seven Christians in el-Arish. IS, which has been launching attacks in the city, claimed responsibility for the killing of these people, five of whom were shot while another was decapitated and the seventh was set on fire. Meanwhile, on Feb. 19, IS published a video of the December attack on St. Peter and St. Paul Coptic Orthodox Church in Cairo, calling for targeting Christians in Egypt.

Sources from the Security Directorate in north Sinai told Al-Monitor on condition of anonymity that el-Arish, which is a crowded urban city, is the Achilles' heel of the security forces as armed men hide between civilians and kill Copts inside their homes and flee before the security forces arrive.

According to official estimates by the Egyptian Cabinet operation room, 144 Christian families have left el-Arish since the last killing of a Copt on Feb. 23. The government reacted by welcoming displaced families, and the security forces and army launched military operations to pursue the armed men.

An official at the national security department in north Sinai told Al-Monitor on condition of anonymity that IS is changing its tactics by attacking civilians at times and security officers and policemen at other times, while security “is slackening in collecting intelligence information” regarding the organization’s activities. Many of Sinai’s citizens are not cooperating with the police and the national security for fear of retaliation by IS.

On Dec. 18, IS posted a video titled “Slitting Throats” showing IS men killing 15 people from Sinai after they confessed to cooperating with the army and security services.

Mina Thabet, a researcher on minorities and religious freedoms at the Egyptian Commission for Rights and Freedoms, a civil society organization, told Al-Monitor that hundreds of people have fled, which indicates how powerful this radical group is. This is the sign of a new phase that began with the attack on St. Peter and St. Paul Coptic Orthodox Church and the video threatening the Copts.

In a phone interview, Thabet said, “We must take this seriously and adopt a comprehensive security approach. The situation indicates that the adopted strategy to fight terrorism since 2011 has proven to be useless and has not reaped the desired fruits. Therefore, it needs to be reviewed and amended.”

In a Feb. 28 statement, Egyptian President Abdel Fattah al-Sisi said that targeting citizens in el-Arish is a “cowardly plot from the evildoers to shake trust in the state, jeopardize national unity and instigate strife.”

Thabet, who helped welcome many families that arrived in Ismailia by providing food and shelter, added, “Terrorists want to send out a message that nobody is safe.”

Sinai journalist and activist Mustafa Sinjar told Al-Monitor over the phone, “IS is using all cards to intimidate the Egyptian regime at different times in order to serve its own interests.” He noted that targeting the Copts is a pressure card that has international and sectarian repercussions for the regime as IS is trying to divide Christians and Muslims in Egypt by attacking the Copts and showing that the state cannot defend them.

He said, “When IS first appeared in 2013, it was not targeting the Copts. But lately the Copts in el-Arish are being increasingly targeted.” Sinjar said without further explanation that IS is most active in three cities in Sinai: Sheikh Zuweid, Rafah and el-Arish.

Sinjar added, “The army is spreading its control more firmly in Rafah and Sheikh Zuweid, because the area is not highly populated. As for el-Arish, it is under the police’s watch and its back is not protected due to its agricultural and desert nature and since it is densely populated. IS can easily attack there.”

The security source said that the Ministry of Interior, in cooperation with the general intelligence and the military intelligence, is working on developing new plans for the deployment of the police, especially in el-Arish.

The former leader of Gamaa Islamiya in Egypt, Najeh Ibrahim, said that IS has changed its strategy. It is no longer targeting “solid” spots such as buildings, and is instead taking aim at “loose” targets such as individuals. This indicates the organization’s relative weakness compared to three years ago.

Ibrahim told Al-Monitor that IS militants have been targeting the army and the infrastructure in Sinai, implementing wide-scale operations, clashing with the army and security and killing many soldiers. But in early 2016, they began a new stage of operations by planting explosives in the way of the security forces and army and using snipers. This reflects the stage of “solid targets.”

He said, “By the end of 2016 and the beginning of 2017, IS realized that solid targets will not do, and the organization moved on to 'loose' operations by launching easy but painful military operations against the Egyptian regime. The targeting of the Copts in el-Arish can be qualified as a loose operation.”

Ibrahim noted that the army is besieging IS within a tight triangle of three cities: “Sheikh Zuweid, Rafah and el-Arish.” It is tightening the noose on IS, which was active in all regions in Sinai. As a result, IS militants resorted to loose operations, which foiled the Egyptian regime’s plans.

In early February, Egypt welcomed Hamas officials to discuss ways to control the borders with the Gaza Strip and eliminate pro-IS extremists in the strategic Sinai.

Ibrahim believes that the time has not come yet to defeat IS, despite its weakness and besiegement. According to him, organizations like IS do not give up easily, while the Egyptian army and security forces fail to completely impose its control over the large Sinai Peninsula. The Egyptian regime is holding on to a stereotypical and conventional strategy that needs to be changed.